How cutting lifesaving foreign aid could hurt the U.S.

Such steep cuts—roughly one third—send a clear message to the world’s most vulnerable: you are not welcome in America, and America will not help you where you are.

93 million people worldwide are in need of desperate humanitarian assistance. 65 million have been forced to flee from their homes due to war, conflict and persecution.

From the brutal civil war in Syria, to a deadly famine sweeping across East Africa, to millions fleeing from ISIS and other extremist groups—U.S. foreign assistance is needed now more than ever. It’s a critical lifeline for the world’s most vulnerable and the visible expression of America’s interests and values. 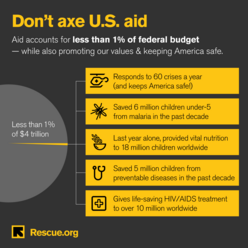 U.S. government funds support and respond to 60 humanitarian crises a year—from armed conflict to natural disasters. Average Americans believe their tax dollars account for a quarter of the money spent overseas, but, in fact, foreign aid makes up merely less than 1 percent of the federal budget: $37 billion out of $4 trillion.

Syria: The last 18 months have been the worst yet for civilians inside Syria. Almost half a million have been killed, hundreds of medical facilities have been purposely targeted (including those supported by the IRC), and more than half of the country’s population forced from their homes.

Read more on how the U.S. saves Syrian lives.

South Sudan: Famine has been declared in regions of South Sudan, which has been embroiled in conflict since its independence. The famine has been described as the largest humanitarian crisis since 1945 as it's affecting more than 20 million people in four different countries. In South Sudan, 100,000 people are suffering from famine with a further one million at risk.

Ethiopia: Ethiopia has suffered recurrent drought for decades. Last year, the country experienced its worst drought in 50 years, affecting more than 10 million people. Currently, yet another drought has left 5.6 million in urgent need of assistance.

Democratic Republic of Congo:Despite several attempts at peace deals, relentless fighting has kept Congo in a state of emergency for over 20 years. Seven million people are currently in need of urgent humanitarian assistance.

Jordan: Syrian refugees in Jordan—from doctors and dentists to farmers, laborers and taxi drivers—have depleted their savings and are living in poverty, struggling to afford health care and rent, with limited access to legal work.

Read more on how the U.S. helps Syrians in Jordan. 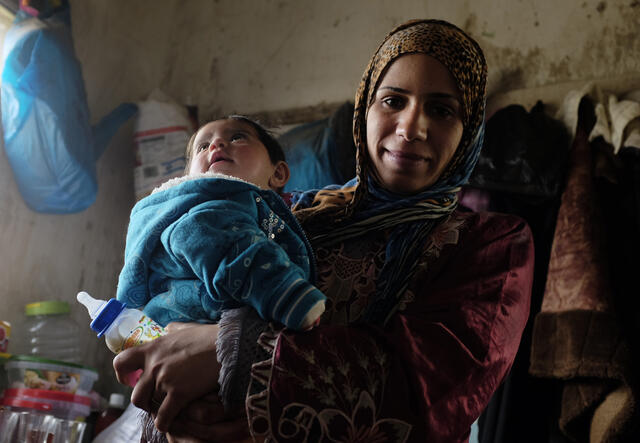 More than 670,000 Syrians have fled to Jordan since the onset of the Syrian conflict.
Photo: Timea Fauszt/IRC

What are some of the positive impacts of U.S. foreign aid?

As the world’s most important donor, the United States is a lifeline for millions of people and a key factor in maintaining global stability and security worldwide.

Since its creation, the United Nations, which receives U.S. funds, has overseen decades of unparalleled international peace. Every year, the U.N. provides food to 80 million people in 80 countries. It vaccinates 45 percent of the world’s children and coordinates responses to epidemics. It also provides lifesaving assistance to the 65 million displaced by conflict and instability.

Here’s a snapshot of the tremendous impact U.S. aid has had globally:

Foreign aid isn’t just about what’s right, it’s about what’s smart: it not only saves lives and decrease poverty, it also promotes stability in other parts of the world where volatility could affect the security of the United States. Global threats like Ebola and ISIS grow out of poverty, instability and bad governance.

To date, 121 retired U.S. generals have signed an open letter, warning that such drastic cuts to American foreign aid could do more harm than good for national security.

Working today to counteract global threats saves lives tomorrow. Foreign aid is an investment in a safer world, well worth 1 percent of the federal budget.