How the IRC responds rapidly to a cyclone

The second major storm to hit southeast Africa in six weeks threatens to devastate an area already compromised by conflict, poverty and drought. 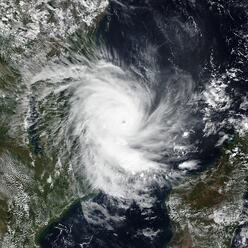 After killing four people on Comoros, an island nation in the Indian Ocean, Cyclone Kenneth made landfall on Mozambique on Thursday, resulting in the deaths of at least 38 more. It is the second such storm to hit Africa’s southeast coast in less than six weeks. In mid-March, Cyclone Idai took more than 1,000 lives in Mozambique, Zimbabwe and Malawi, making it the third deadliest cyclone on record in the southern hemisphere.

Kenneth, equal to a Category 4 hurricane, brought wind speeds of 140 mph and torrential rain, putting millions in Mozambique and southern Tanzania at risk of floods, mudslides and disease. As the slow-moving storm pushed north, the International Rescue Committee and other humanitarian organizations prepared for a relief effort that follows hard upon the recent aid response to Idai.

The IRC, which has been working in Zimbabwe since 2008, immediately launched an emergency response in the country after Idai to assess damage and deliver medical care, food and emergency supplies to those in need. We are continuing to monitor the damage and scale up our response; however, it is urgent that international donors make emergency funding available to shore up a response commensurate to the expanding need.

“There were sustained rains that went on from the 15th to the 17th of March,” says Bibi Lamond, senior emergency environmental health coordinator for the IRC in Zimbabwe, of Cyclone Idai. “There were really horrific numbers of landslides that swept away houses, toilets, destroyed water sources and badly affected a vast number of people who were living along the river banks or higher up in the mountains.”

When we say that nothing stops @theIRC teams from reaching disaster affected communities, we mean it!

Our colleague Aletha earlier today making her way into Ward 21 at Nyahode in Chimanimani. #CycloneIdaipic.twitter.com/NbrFYUTtQS

The IRC focused its initial response on immediate lifesaving interventions—food and health care, explains Paolo Cernuschi, IRC country director in Zimbabwe. “Moving forward, over the next two to three months, we want to start disbursing cash, rather than in-kind services. We want to focus on water and sanitation. And we are very concerned about the potential risk of outbreaks of cholera.”

In addition, the IRC plans to prioritize the protection of women and girls who were displaced by the storm—setting up safe spaces, monitoring for sexual violence and abuse (which tend to spike during times of crisis), distributing solar lamps so that they are less likely to be exposed to violence.

The crucial importance of the IRC’s Crisis Response Fund

For 85 years, the IRC has been responding to the world’s worst humanitarian crises and our experience has taught us many things, including the importance of being prepared for an emergency. The IRC works with our teams around the world to prepare them should crisis strike. We work with them to create plans to ensure they are as ready as possible should disaster come and train them in how to respond to emergencies so they are ready to respond at a moment’s notice. Our global specialists—doctors, engineers, social workers and logisticians—are on standby ready to deploy within 72 hours.

Our global specialists—doctors, engineers, social workers and logisticians—are on standby ready to deploy within 72 hours.

Recently, the IRC launched the Crisis Response Fund, a first-of-its-kind initiative that allows our dedicated partners to contribute directly to our emergency preparedness and response work, and enables us to respond to emergencies as soon as we see a need. 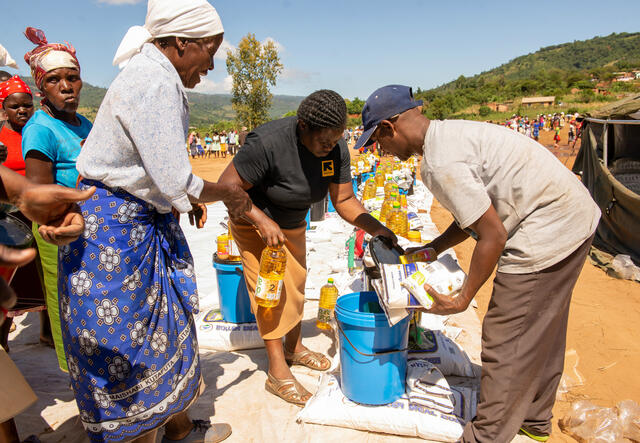 A woman from the village of Machongwe, Zimbabwe collects food and emergency supplies from IRC staff after Cyclone Idai. In the immediate aftermath of the storm, IRC teams navigated damaged roads to provide aid.
Photo: Malshon Masarakufa/IRC

The fund enabled us to respond rapidly to Cyclone Idai in Zimbabwe, allowing us to have teams on the ground by the end of Day One, to have basic hygiene supplies ready for distribution by the end of Day Two, to have an environmental health coordinator deployed by Day Three, and to start distributions of soap and other hygiene items, buckets and water purification tablets by the end of Day Four. All of that would not be possible without flexible, readily available funding.

Although the IRC does not have an existing presence in the regions that are affected by Cyclone Kenneth, our team in Tanzania revised its emergency contingency plans as soon as the cyclone began to form—closely monitoring the storm and preparing to respond if needed.

Cyclone Kenneth is expected to hit Mozambique & Tanzania today. Our teams on the ground in Tanzania are closely monitoring the situation. This cyclone comes just weeks after destructive Cyclone Idai led to more than 1,000 deaths in Mozambique & Zimbabwe.https://t.co/7PI0r41YjG

These preparations included readying to mobilize first aid, mental-health support and protection for vulnerable survivors, and identifying the most-needed supplies and equipment and how to transport them. During a crisis, we also work closely with local authorities to evaluate the number of people affected and the most important needs they face.

As our Cyclone Idai response continues in Zimbabwe, we are already looking at rebuilding livelihoods. Immediate lifesaving support will continue to be the most pressing need, but the current crisis comes on top of a preexisting drought. Vulnerable communities in rural areas already were suffering from lost crops and livestock. With the next farming season scheduled to begin in the fall, most households will lose an entire other year of income—humanitarian needs will be extended by another 12 to 18 months. 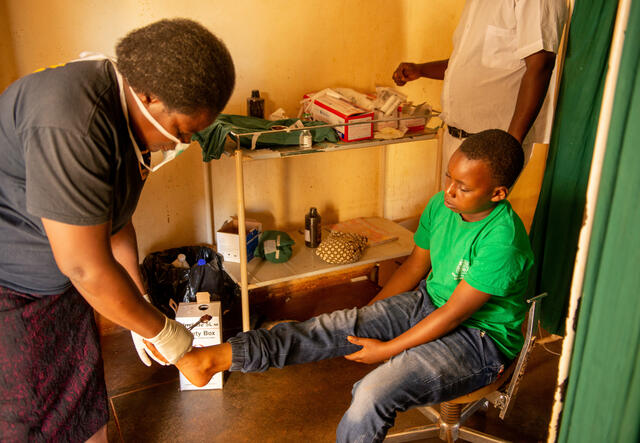 An IRC health worker treats a boy at Chimanimani hospital in one of the areas of Zimbabwe hit hardest by Cyclone Idai. While lifesaving support is the most pressing need, the impact of the storm will continue to be felt for months.
Photo: Malshon Masarakufa/IRC

“The impact of this disaster cannot be underestimated and will require our attention for many months to come,” says Cernuschi. “While we are doing what we can to reach those in need, we need a major injection of emergency funding to be able to scale up our response.”