I met families who were detained at the U.S. border. They just want safety.

Actress and activist Piper Perabo visited IRC programs in Arizona to draw attention to the conditions faced by asylum seekers at the border, and the ongoing humanitarian crisis in Guatemala, Honduras and El Salvador.

Eddy* traveled thousands of miles from Guatemala, trekking through some of the roughest and most dangerous territory in the Americas in search of a new life.

“I had a number of experiences that were life-threatening,” Eddy told me. What happened during the journey was too traumatic for him to share. But, he says, he endured them because “we want a better future for our families, just like anyone in the world would want.”

Oskar* explained how hard it is for children to grow up in his home country of Honduras, which is dominated by murderous gangs.

“Life is diminished because the crime is so high,” he says. Eddy and Oskar are both fathers who risked everything for one reason—to give their children their best chance at survival.

I met the two men (who prefer to remain anonymous to keep their families safe) earlier this month when I traveled to Phoenix, Arizona. I was there with the global humanitarian organization the International Rescue Committee (IRC) to draw attention to the conditions faced by asylum-seeking families, and the ongoing humanitarian crisis in Guatemala, Honduras and El Salvador.

These three countries are among the most violent in the world outside of a war zone. In fact, in El Salvador, a woman is killed every 18 hours because of gang violence.

I heard many stories like Eddy’s and Oskar’s from the families I met in Phoenix—all of them the kind of people who qualify for asylum. In the news you hear about migrants and people “rushing the border,” but, really, these are families fleeing dangerous, violent places and seeking legal asylum here in the United States. 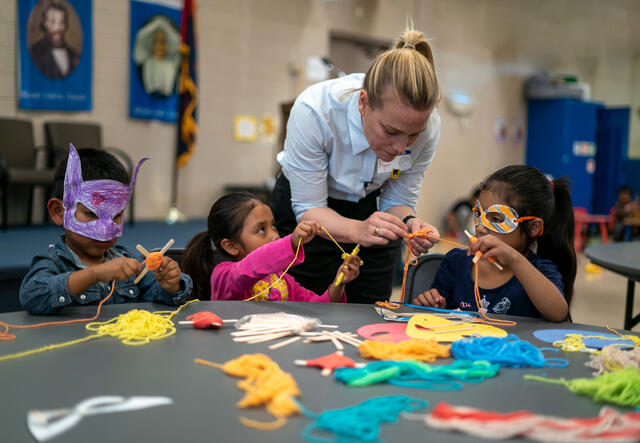 Many children at the IRC day center have experienced emotional and psychological trauma from growing up amid violence and fleeing their homes. “The IRC’s work here is so generous, soft, and yet efficient. It is incredible to watch," Piper said.
Photo: Andrew Oberstadt/IRC

While in Phoenix, I welcomed over 100 asylum seekers released by immigration authorities—all families with small children or infants—at a day center the IRC operates with its partner St. Vincent de Paul and other local community groups.

When these families step off the bus, holding their very few belongings in Ziploc bags, you can see the exhaustion and fear on people’s faces. It’s incredibly emotional. No one has told them where they are or what is to happen next.

Outside of the center, the IRC and its volunteers—adults, teenagers and even children—form two lines in what they call the “tunnel of love” to greet the arriving families with claps, smiles and a warm “Bienvenido!” and “Buenos días!” In a way, this is the first real welcome these asylum seekers have experienced since crossing the border.

It’s impressive to see the IRC and its partners in action at the center, providing families with basic medical attention and a change of clothes, helping them call relatives in the United States, and explaining the process of seeking asylum in a friendly, calm and efficient way.

While I was there I helped serve meals, played with children, and made phone calls to alert relatives left behind that their family members had found safety after an arduous and sometimes traumatic journey. 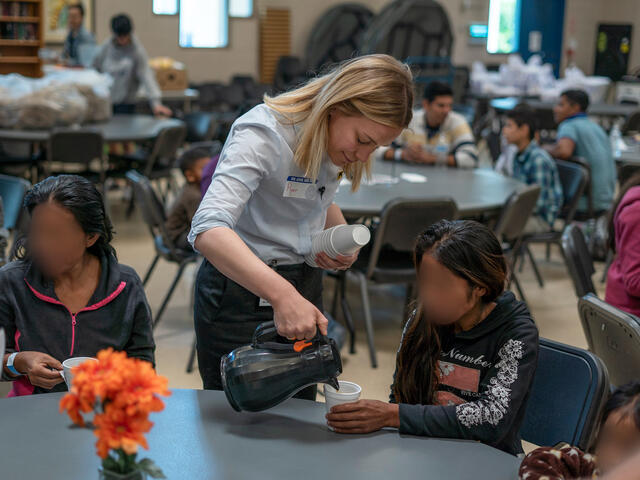 At the IRC day center, Piper Perabo helped serve meals, played with children, and made phone calls to alert relatives left behind that their family members had found safety.
Photo: Andrew Oberstadt/IRC

As these families who have endured so much settle in at the center, they begin to relax. All of a sudden you see fathers sitting back in their chairs, mothers setting their kids down to let them go play. Everyone starts talking, and you start to feel this relief happening. Even though the change is subtle and small, it is one of the most amazing things to see—people realizing they are now safe.

“Here, we are able to breathe again after being so scared,” is how Eddy, the Guatemalan father, put it. He’d been unable to communicate with his wife and children while he was detained.

Oskar, from Honduras, added, “For the first time since I arrived, everyone I’m interacting with is kind and generous.”

In the news you hear about migrants and people “rushing the border,” but, really, these are families fleeing dangerous, violent places and seeking legal asylum here in the United States.

Oskar told me he too was unable to speak to his family while in detention to let them know he was alive. “The emotion of it all makes me want to cry because truthfully…it was horrible,” he said. “I’m very thankful because here everyone treats us so well, as human beings.”

What is happening at the U.S. border is not a “migrant crisis” but a symptom of the real crisis these families are fleeing: growing violence in Central America. There is an increase in the numbers of people seeking asylum, and the U.S. government has the resources to increase its capacity—all the while treating everyone with dignity and humanity.

Before I left Phoenix, I escorted families to the airport, where many of them were boarding an airplane for the first time, to reunite with their loved ones already in the U.S. and seek a better future.

They want what we all want...a better future. 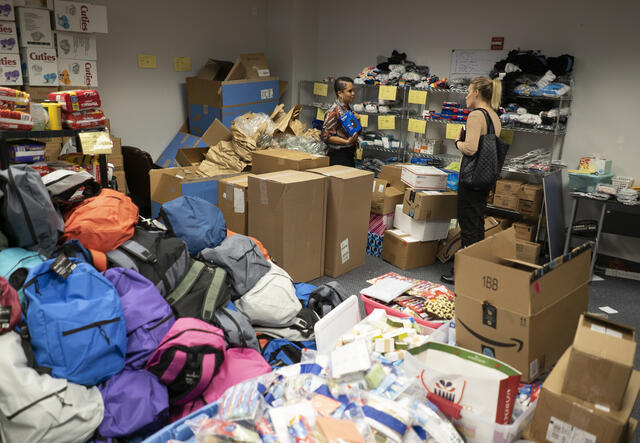 There has been an outpouring of generosity from local Arizonans, including donated food, clothing, backpacks and toys.
Photo: Andrew Oberstadt

Way to get involved

So, how can we help? This crisis is in the U.S., in our backyard, and there are real and practical things that everyone can do to make an impact.

First, you can support the IRC’s work by making a donation or purchasing clothing, diapers, toiletries, food and other essentials from its Phoenix team’s Amazon.com wish list. As of June, the IRC has provided emergency humanitarian assistance to more than 4,000 children and parents at the day shelter in Phoenix.

Second, help fight for policies that deliver real change for families seeking asylum. Call your Senator and tell them it is time for Congress to put a stop to the Trump Administration’s attacks on asylum seekers, and to do more to stand up for people seeking safety. Seeking asylum is legal. Turning away asylum seekers is not.

Finally, educate your family and friends about what is actually happening at the U.S. border and why thousands of people are fleeing from Central America by sharing the facts.

Piper Perabo and the IRC

Piper Perabo became an IRC Voice to help those displaced by conflict, religious persecution and political oppression around the globe. Piper has traveled to Greece with an IRC emergency team to raise awareness of the refugee crisis in Europe as well as Beirut, Lebanon to visit with children who work in the city to support their families. Read more about her work with us.