An Iraqi refugee resettled in Idaho creates jobs for Americans

The grey light of an April morning leaked into the streets of eastern Baghdad as Mikdam Bunyan insisted he drive his brother Salam to work. As the two started off, gunshots rang out and bullets pierced their car. Mikdam was killed instantly.

Salam, devastated with grief, fell into the grip of despair. He knew immediately—the bullets were meant for him.

Since 2003, Salam had worked as a chef for the United States military, having learned his craft at top local restaurants and cooking for the United Nations. At the time, militants targeted anyone aiding Americans during the Iraqi war.

“The shooters thought I was the driver,” he says. “They would watch me come and go to work. I was always the one driving…just not this time."

Salam knew the attackers would try again once they discovered he was alive. It was not an easy decision to leave his beloved Iraq, or the grave of his brother, but he felt he could no longer protect his wife or two small children. Within a week, he took his family to neighboring Syria.

The Bunyans attempted to make a new life in Damascus, where the current civil war wouldn’t erupt for another six years, but as a stranger in a foreign land, it was difficult for Salam to restart his culinary career. To make ends meet, he applied for work with a local media team tasked with creating videos denouncing terrorism. His work, once again, invited death threats.

Overwhelmed with anxiety for the safety of his family, Salam applied for refugee resettlement in 2006. After a slew of interviews, background checks and thorough screenings, the Bunyans were accepted for relocation to the United States.

“I'm leaving to save my kids,” he remembers telling himself. “We would no longer have to be afraid.” 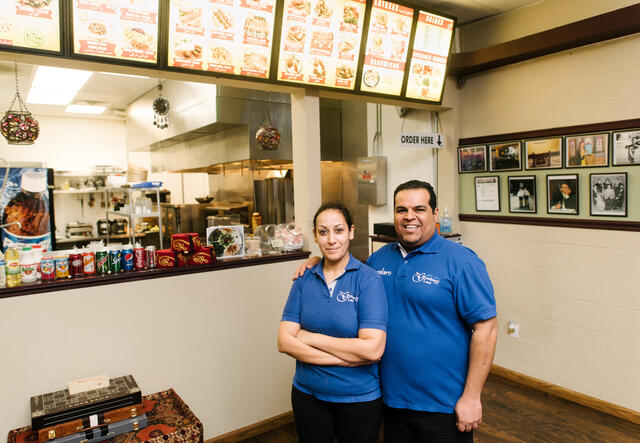 Uprooted from Iraq and Syria, Salam Bunyan, his wife Aseel and their children were resettled by the International Rescue Committee in Boise, Idaho, where he has opened a Middle Eastern restaurant.
Photo: Jonathan McBride/IRC

The road to goodness land

Almost a decade later, half a world away, the 42-year-old chef recounts his story in the comfortable confines of The Goodness Land, his Middle Eastern restaurant in Boise, Idaho. Salam chose the name to honor his homeland, which he remembers as a place of kindness and love.

“I want to show people another side of refugee life, another country and culture,” he says. “My point is not to just sell food—it’s to provide a different experience.”

After arriving in the U.S in August 2008, Salam vowed to open his own restaurant, one where he could celebrate traditional Iraqi cuisine. Cooking has always been a form of expression for him. Every dish is a work of art.

I’m not taking a job, I’m giving a job. I give another chance to people.

But creating a business from scratch can be an uphill battle. Salam encountered several hurdles.

"When you open a business for the first time in the United States, that's not something easy, especially when I'm beginning as a refugee,” he recalls.

After Salam and his family were resettled by the International Rescue Committee, which helped the Bunyans find housing, enroll their children in school, and overcome culture barriers, Salam began his entrepreneurial journey by catering for local companies and organizations, including the IRC. He also received a small loan from a local nonprofit that helped him set up shop in the Boise International Market.

But Salam gives most credit for his success to the Boise community—his encouraging and outspoken champions.

"The people of Boise support me a lot. My [daughter’s] teacher told her, ‘Your dad, he makes amazing food!’” Salam allows himself a little laugh. "I'm very happy with that. I'm proud. My kids come home and tell me how everybody is talking about me." 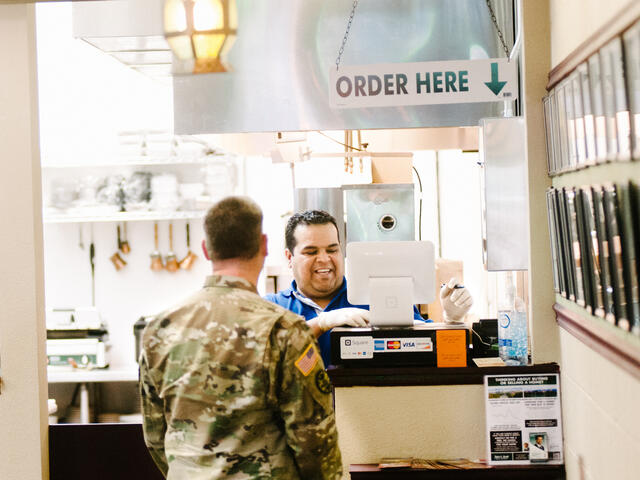 Some of Salam’s favorite customers include soldiers from a nearby Army base. The chef credits the local community for helping him summon the courage to start a new business in a new country.
Photo: Jonathan McBride/IRC

But Salam would face one further, devastating setback. The Boise International Market burned down two years ago. He was beyond shattered after years of hard work, but his customers once again responded, providing the chef with a stream of donations in addition to well wishes and encouragement. The IRC also provided financial assistance to all the vendors affected by the fire.

“One American family gave me $500,” says Salam. “They told me, ‘Please don't close it, just be patient, the customers are coming.’ I told them, ‘This is my dream. I'm not going to leave.’”

Salam confesses that it didn’t feel right to accept donations from his generous customers, yet he was grateful that the community had his back. Within a few months, Salam reopened and once again served up heaping platters of kebabs, falafels, fattoush salads and Iraqi dolmas, stuffed vegetables wrapped in vine leaves.

In the past year, some government officials have expressed concerns that refugees pose a security risk or represent a drain on the economy. In reality, many, like Salam, bring an entrepreneurial spirit, strong character, and willpower not only to survive, but to help others as well.

“A refugee is no different from anyone [in America],” says Salam. “He’s human, he has experience, but he is in a different situation, Refugees leave their homes, their families and their countries—they don’t have a choice.”

Nour, 8, enjoys visiting her father at his restaurant. In school, she loves math, English and science.
Photo: Jonathan McBride/IRC

In fact, Salam has created jobs with his business. “I have American people working [in The Goodness Land]. I’m not taking a job, I’m giving a job. I give another chance to people.”

Salam, now an American citizen, emphasizes that Muslims like himself can thrive in the United States.

“I have a good relationship with the community,” he says, adding that some of his best customers are soldiers from a nearby Army base and enjoy Middle Eastern cuisine.

His words of advise to his fellow citizens as they consider the plight of refugees worldwide:

“Don’t think just because he’s Muslim, he’s supposed to be dangerous. There’s a great mix inside America. All are human and all have the same rights.”