Putting down roots: An Iraqi refugee becomes an American citizen

Having earned her citizenship, Maha al-Obaidi embraces a new goal: reuniting her family.

“Today is the biggest day of my life,” says Maha al-Obaidi, age 66. “I’m going to take my citizenship test. I’ll try to review my questions, one more millionth time...”

Maha is, understandably, nervous. An Iraqi refugee and mother of five, she has studied hard for this day. She is eager to gain all of the rights guaranteed to U.S. citizens. She also feels her family is depending on her.

When I become a citizen, I will put on my wings and fly.

Six years after she resettled in Queens, NY, Maha’s family remains divided: three of her sons are thriving in America, but two others, her husband, and her 13-year-old grandson remain in the Middle East, in Jordan and the United Arab Emirates. Without citizenship, she has worried about the risks of travelling to see them and at times policies like the Trump Administration's travel ban have prevented visits entirely.

Citizenship will allow Maha to travel more securely, once the coronavirus pandemic allows for it, and she hopes it will bring her closer to her biggest dream: making her family whole again, in America.

“When I become a citizen, I will put on my wings and fly.”

Maha was hesitant to leave Iraq, even after the invasion by the U.S.-led coalition in 2003 she didn’t want to leave the “beautiful life” she had built with her family.

Unfortunately, the situation in Iraq steadily worsened. When her son and husband were kidnapped—the family had to pay a ransom to get them back—they decided it was no longer safe to stay in their home.

The family fled to Jordan, but work was scarce and, with so many refugees in the country and with little hope of gaining permanent status, they felt their situation was becoming ever more uncertain. In 2010, the first of Maha’s sons resettled in the United States. Two of his brothers would join him, and Maha would follow in 2014. 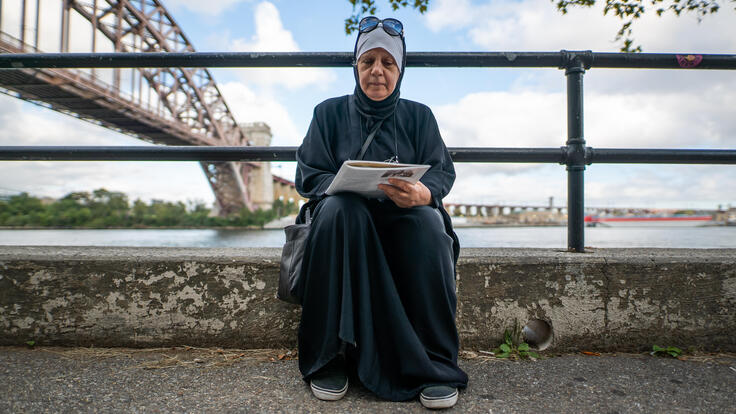 In a city park near her home, Maha studies American history and goverment to prepare for her citizenship test. To become a citizen, Maha also had to live in the country for five consecutive years, prepare an application, and undergo multiple background checks.
Photo: Andrew Oberstadt/IRC

Maha was anxious about the move. She would have to learn a new culture, and she feared discrimination against Muslims.

But Maha found Americans welcoming and kind. Today, she teaches Arabic and Quranic studies for an online school, volunteers at her local mosque, and has taught Iraqi cooking through the League of Kitchens. She has embraced her new vibrant and diverse community in Queens.

“Now, I know more than my sons who have been here five or six years before,” she says.

In New York, Maha adores her three sons, two daughter-in-laws, and three grandchildren (with one more on the way). She is proud of her sons’ work ethic: one is a systems engineer, one an Uber driver, and another owns his own business repairing cell phones. 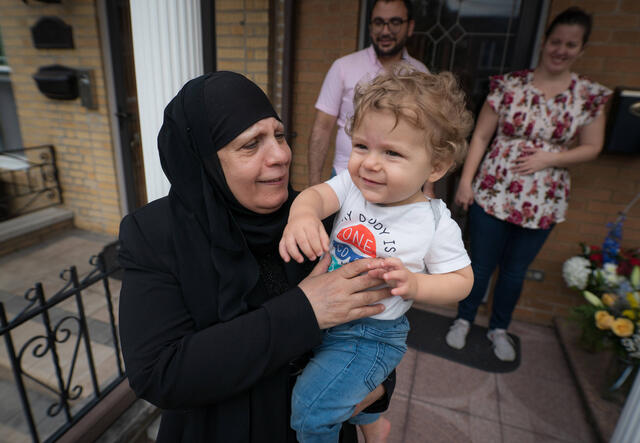 Maha with her grandson in New York.
Photo: Andrew Oberstadt/IRC

Her family in the Middle East nearly joined Maha in New York but have continually run against roadblocks, including the Trump Administration’s travel ban and other delays.

“My husband applied and was given permission—he had begun to prepare himself to come here,” Maha says. “Then suddenly, they said to him, ‘you are refused.’ This has happened to a lot of Iraqi families,” she laments. 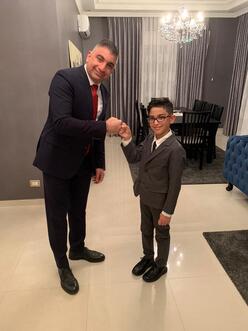 Maha's eldest son and grandson at a wedding in Jordan.
Photo: Courtesy of Maha al-Obaidi

“They prepare themselves and have everything but their airplane ticket. And suddenly, they cannot come.”

Although the original travel ban is no longer in place, the Trump Administration slashed the number of refugees allowed into the U.S. and implemented massive bureaucratic impediments that have kept families like Maha’s apart.

Maha keeps in touch with her family through phone calls and the internet but it’s not the same. She describes a conversation with her grandson in Jordan, whom she lived with until he was 6 years old.

The first thing she does is call her sons in the Middle East. Everyone is happy, laughing as Maha explains that the test was easy for her after all. “It took barely half an hour,” she exclaims. 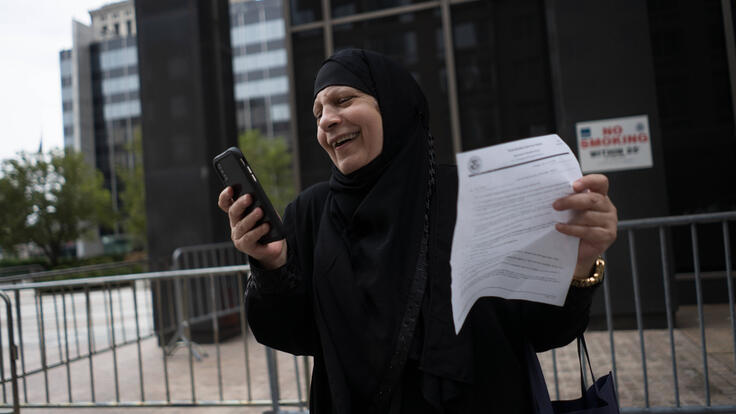 Maha calls her son to share the results of her citizenship test.
Photo: Andrew Oberstadt/IRC

Later, at the citizenship ceremony, Maha took her oath of allegiance. Immediately afterward, she drove to the Queens County Board of Elections to register to vote. She met the deadline to cast a ballot in the November 3 elections by one day.

“This is the first of my constitutional rights that I am practicing” she says. “I hope America will stay the country of freedom, and of safety.”

Next, Maha will apply for a passport. 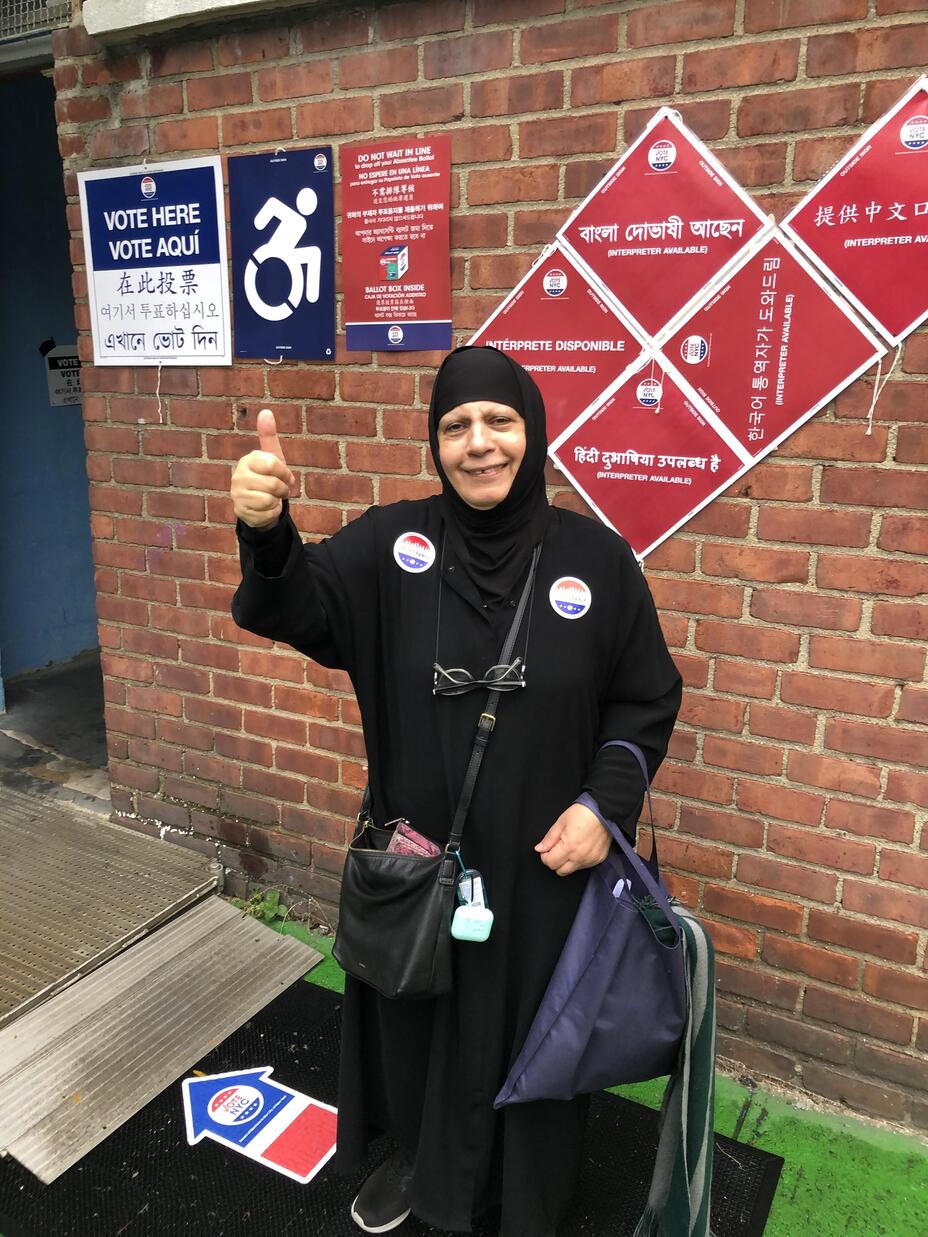 Maha votes for the first time. "I feel that if I can share my voice and be an active member of the community, I should," she says.
Photo: Courtesy of Maha al-Obaidi

“I see these six years in my mind like a film,” she says. “When I came to New York, the picture was confusing and difficult. But now, the picture is so clear.”

Maha feels grounded in her new community. She has friends, family, and a community that she loves. “I cannot cut my roots,” she says.

But even as she embraces the new life she has built for herself, Maha is counting the days when her family can be whole again.

“I miss them too much and they miss me,” she says. “And I hope that I can bring them here to live together for the rest of my life...

“This is the only option we have because we cannot return to our country.” 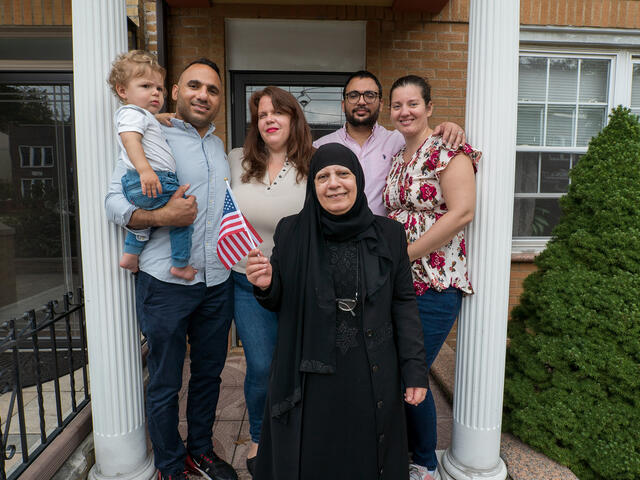 Maha celebrates her citizenship with her family in New York. "I am an American woman," she says. "I put my roots in this ground, and I built my family, a new family, with my sons."
Photo: Andrew Oberstadt/IRC

How can I help refugees in the United States?

The United States has long offered safe haven to people fleeing violence, tyranny, and persecution. But the Trump Administration has slashed the number of refugees allowed into the country, putting American values, tradition, and interests are at stake.

Explore the stories of other refugees and new U.S. citizens who voted for the first time in the 2020 election.