I've seen what's happening on Lesbos and it's shameful

I arrived on the Greek island of Lesbos last week, amid reports that asylum seekers and aid workers were being targeted by violent far-right groups, photojournalists were having their cameras thrown in the sea and hundreds of new people were coming to the island every day seeking safety from war-torn countries.

Editor's note: On September 9, 2020, a fire engulfed Moria refugee camp in Lesbos, destroying most of the camp and leaving 12,000 without shelter. This tragic but sadly predictable disaster followed a series of dangers and indignities faced by refugees on the island, including the threat of COVID-19. The IRC is on-the-ground providing psychosocial support along with sleeping bags and other urgent items. Learn more and find out how you can help.

The night before I came to Lesbos, a community center, one of the only places of solace and comfort for refugees living in Lesbos, had been burnt down—reportedly by far-right groups.

Devastating images of the One Happy Family community centre on fire in Lesbos. This is a place of hope and solidarity - a community centre where people could come and escape from the misery of the camp.

This has to stop.

I’ve been here before but tensions have never been higher than they are today. The streets feel empty. Graffiti on the walls speaks of police brutality, a reminder of the recent protests sparked by the presence of riot police deployed from Athens.

Arriving on the island, you can’t miss the newest addition to the port: an enormous, gray navy ship. Inside, 450 asylum seekers are currently being detained without access to basic necessities. At first, people were made to sleep outside, curling up in blankets on the ground of the port or were put on buses to sleep. Now they’re crammed inside the ship, which has no windows and little air. 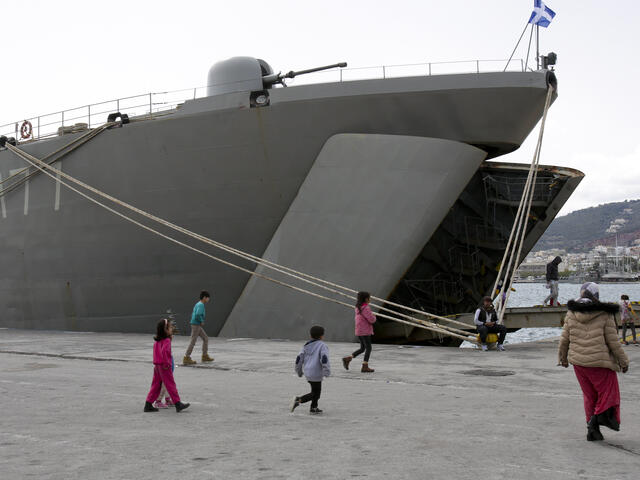 Some 450 people are detained on this Navy ship. Reports suggest the government plans to deport them back to the countries they've fled from.
Photo: Milos Bicanski/IRC

No one knows what is going to happen to people stuck on board, but reports suggest they face being deported back to the countries they’ve fled from. If true, this would be a breach of international and EU law.

Video obtained by @derspiegel from inside the navy boat in #Lesbos where c. 500 refugees incl children and pregnant women are held. They are the first migrants who came after Greece stopped accepting asylum applications on 1/3. To be transferred to the mainland & then deported pic.twitter.com/VqYiw5BgMB

It’s a new strategy being used by the Greek government, who suspended all new asylum applications last week after Turkey suddenly re-opened its borders and started allowing refugees to come to Europe (something they had stopped four years ago this month as part of what is often called the EU-Turkey Deal).

How did we get here?

Over the last five years, almost a million people have come through Lesbos seeking safety. Today, 20,000 live in squalid conditions in an overcrowded reception center near the village of Moria. This place, where I saw rivers of rubbish and families living in tents that other people would leave behind at festivals, is now almost seven times over capacity. It’s dangerous and dirty, and much of the camp is surrounded by barbed wire, making people feel like prisoners. 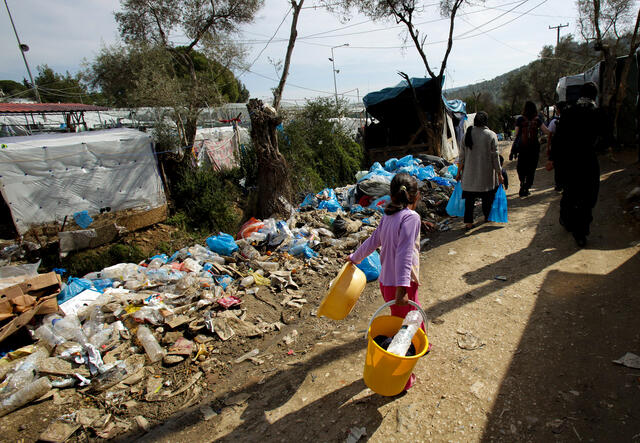 A girl walks through Moria, where severely overcrowding has led to dangerous conditions.
Photo: Milos Bicanski/IRC

Without adequate support from other European countries, Greece has been shouldering the responsibility of providing protection to refugees simply because of its geography. It’s been struggling to cope for a long time—these last two weeks of unrest are a result of years of tension bubbling up to a breaking point.

Far-right violence is pushing everyone to the edge

Most IRC staff on Lesbos are from the island. They’re local people who have been supporting refugees since the peak of arrivals in 2015. They told me about the fear they’re now experiencing: being careful not to discuss their job in public places, going straight home after work and staying inside. One colleague told me a gang waited at the only entrance to her village: “I have lived here all of my life and suddenly I leave my house to drive to work and there are men with covered faces holding sticks and asking to see my ID. They wanted to check that I am really Greek!”

Kiki Michailidou, the IRC’s mental health lead for the islands described a similar story. She left work amid a protest in the island’s main town, Mytilene, just before the riot police arrived on the island. Protesters threw rocks at cars they suspected belonged to the staff of NGOs and burned tires to form roadblocks. “I have lived on this island all of my life and I have never felt so unsafe. It just isn’t the welcoming island I know,” she told me. 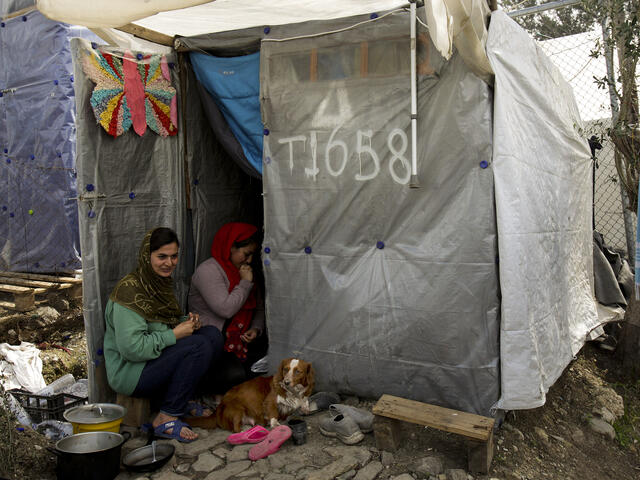 Parasi, who came to Lesvos from Afghanistan, and a friend sit outside their shelter with their dog Rex.
Photo: Milos Bicanski/IRC

This is not a safe place for asylum seekers either. When even the people who support them are targeted with violence, the fear among those living in Moria is palpable. I was told by Sakhim, a refugee from Afghanistan, that he no longer felt safe leaving his tent. A mother of two, also from Afghanistan, told me that she doesn’t let her children play further than a couple of meters from her tent because she is worried for their safety. One woman had decided to leave Moria and relocate to the woods because she felt safer with no one else around. There are also 1,800 unaccompanied children across the islands who have come alone and are at an enormous risk of exploitation.

Europe has to do better

European countries have the capacity to relocate those who are caught in such dire circumstances on the islands. Although it is heartening to see that five European countries, including Germany, have agreed to relocate 1,500 of the unaccompanied children, there are many more who also need urgent help.

Many of the people on Lesbos have fled war in Syria, persecution in Iraq, conflict in Afghanistan, and experienced trauma along their journey. They’ve come from countries all over the world, thousands of miles away, each with their own story of struggle, determined to find sanctuary, contribute and create a better life. And now they’ve reached Europe, they’re being herded onto a navy ship, with no idea of what will happen next. Is this really the best we have to offer people? Is this really the Europe we want to stand for?

The International Rescue Committee is on the ground in Lesbos providing mental health support. Read more about our work in Greece.