Learning a trade, stitching together a future

Far from home and living with a disability, 30-year-old Syrian refugee Mohamed Saleh Ismail seizes an opportunity to restart his life in Lebanon.

The noise is deafening. More than a dozen people sit in rows, eyes down, focused on the swathes of cloth they glide underneath the needles of their sewing machines. Dresses, work clothes, school uniforms, wholesale or made to order, they stitch them all inside this small workshop in Bourj Hammoud, a suburb of Beirut.

Beside a large whirring fan, spluttering as it struggles to keep temperatures bearable, sits Mohamed Saleh Ismail. An ethnic Kurd from Kobanî, a town on Syria’s northern border with Turkey, the 30-year-old has experienced some of the most intense fighting of the five-year-long civil war.

Mohamed fled to Lebanon two years ago when Kobanî became too dangerous. “I had no future in Syria,” he says. “There was no security. It might take 10 years for hope to return.” 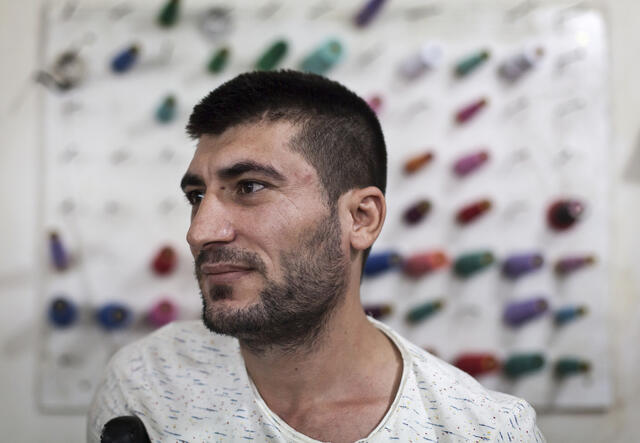 To help him to survive on his own in Beirut, the IRC gave Mohamed $200 in emergency funds so he could pay rent, and also placed him in its apprenticeship program as a tailor.
Photo: Jacob Russell/IRC

But the journey to safety was fraught with risk as well. “I traveled by bus in a convoy, and the bus behind was attacked as we passed through Idlib,” he recalls, adding, “I never found out what happened to those on board.”

When he climbed on board his bus, Mohamed became one of 4.8 million Syrians driven from their homes, and one of 1.5 million who have landed in Lebanon. (Today, one in four residents of the city is a refugee.)

Life for Mohamed in Beirut has been harder than most. Propped up against the wall next to his sewing machine is his walking stick. Finding work is hard enough for Syrian refugees, but for those with disabilities it’s practically impossible.

“I wasn’t born with problems with my leg, but I contracted something when I was very young, maybe only two years old, which left me like this,” he explains. “One of my legs is paralyzed below the knee. I need an operation but it’s not possible without money.”

Mohamed initially linked up with friends within Beirut’s Kurdish community, but he realized he could not impose on them for long. “My friends just didn’t have the space to let me stay with them all the time, so I’ve had to sleep on the streets and under bridges, sometimes for a couple of months at a time.” He would rely on the kindness of strangers to eat during the day.

More than half of Syrian refugees in Lebanon live in extreme poverty. About 70 percent lack legal status, few having enough money to renew residency permits. Mohamed is among them, but unlike many others, he hasn’t been detained for breaking any rules. He says police are sympathetic to him because of his disability.

“I used to know a lot of people in Beirut but they’ve all moved on to Europe,” he says. “My family all moved to Germany. They took the dinghy to Greece. My family wanted me to join them, but my disability means I can’t walk long distances.”

Fortunately, Mohamed has one staunch friend—the International Rescue Committee, which not only provided him an emergency payment of $200 so he could pay rent, but also placed him in its apprenticeship program. The IRC persuades employers to train vulnerable Syrian refugees for three months by providing for their wages. 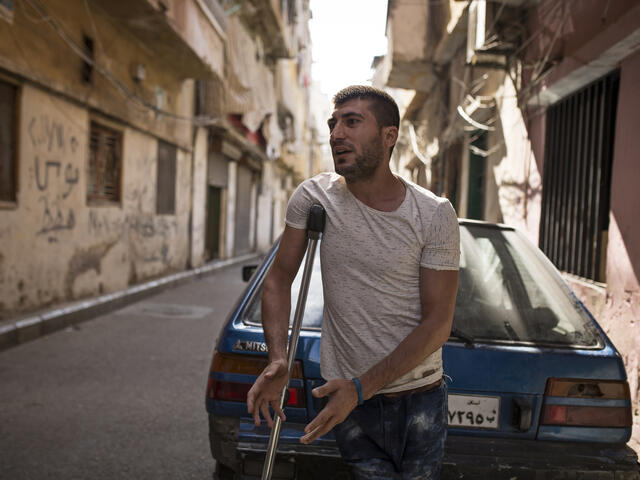 Mohamed fled to Lebanon two years ago when his home became too dangerous. “I had no future in Syria,” he says. “There was no security.”
Photo: Jacob Russell/IRC

The IRC has placed more than 300 apprentices with some 200 employers, including florists, bakers, butchers, tailors, hairdressers and mechanics. Apprentices have even been placed with interior design companies and photography studios.

One major advantage of the IRC’s apprenticeship program: each IRC employer is closely vetted and the rights of the apprentice clearly explained. The exploitation of Syrian refugees has become a growing concern.

“The apprenticeship was difficult at first, but I’m happy in this type of work because I can do it sitting down,” says Mohamed. “I’m proud that by learning a trade I can better rely on myself.”

Mohamed’s employer is also happy. He says his new worker can become a professional with a little more practice. And then, like a ray of sun in a troubled sky, this survivor will be able to support himself in his new life in Lebanon. 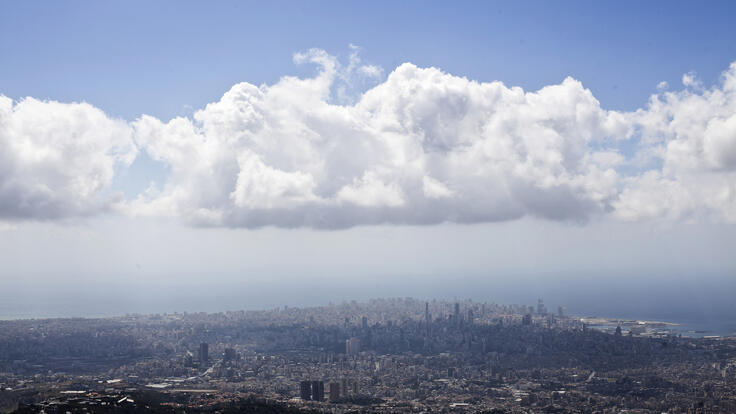 One in four people in Lebanon is a Syrian refugee. No country in the world supports as many Syrian refugees proportional to its population. Photo: Jacob Russell/IRC 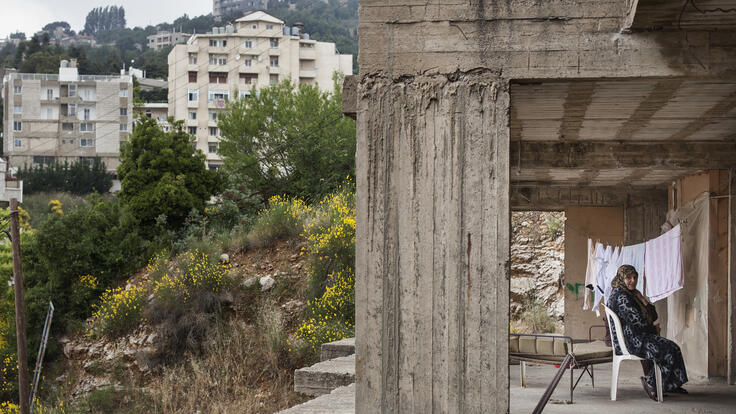 A Syrian woman sits in her home, an unfinished garage without running water or toilets, in Qlaiaat, Mount Lebanon.

There are no formal camps for Syrians in Lebanon, leaving refugees scattered across the country in more than 1,400 communities, often hidden from view. Around one-fifth of them live in unfinished or abandoned buildings, or in ad-hoc tent settlements. Almost all struggle to make rent in cramped quarters in the country’s poorer neighborhoods. Photo: Jacob Russell/IRC 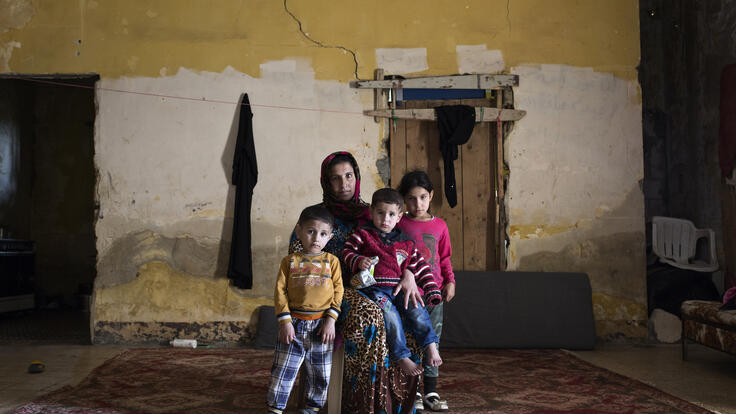 A Syrian woman and three of her children in their home, an abandoned building in Hammana, Mount Lebanon. She shares the building with three more families from Idelb in northern Syria.

As the Syrian civil war rages on, refugees can’t return home, yet can’t earn sustainable incomes to support themselves and their families. Half of all Syrian refugees in Lebanon live in extreme poverty; of those formally registered, only half are eligible for U.N. World Food Program aid, which in any case amounts to just $23 per person per month. Photo: Jacob Russell/IRC 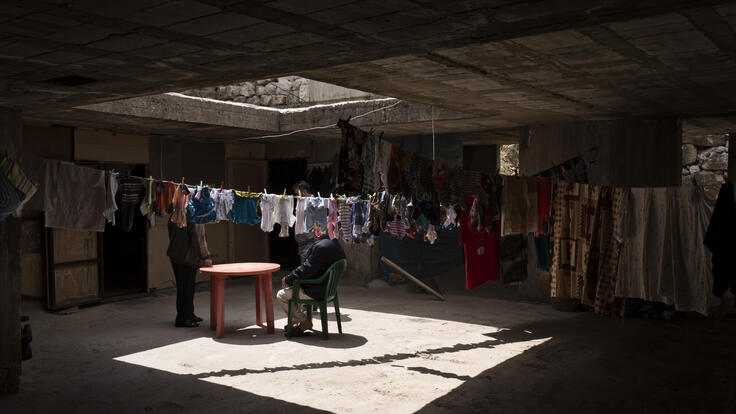 Two of the 35 Syrians who have fashioned a home in an unfinished building in Qlaiaat, Mount Lebanon. Most are either elderly or very young.

Sixty percent of refugees worldwide live in towns and cities; their average length of displacement is 25 years. Long-term solutions are needed to allow refugees to rebuild their lives and contribute to the economy of their host communities. 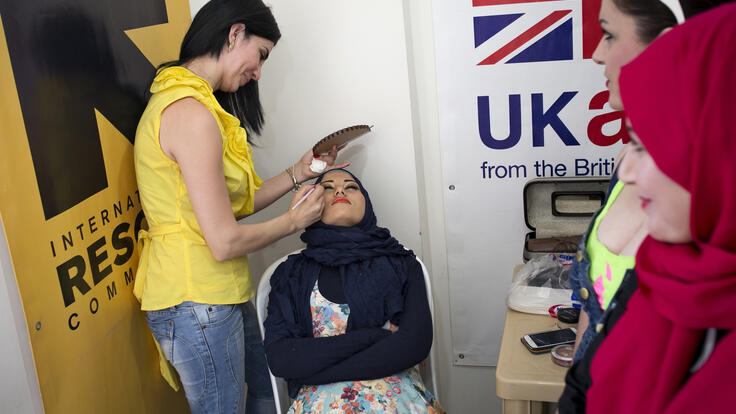 Syrian and Lebanese women take part in a cosmetology-training session at the IRC’s livelihoods center in Mount Lebanon.

A new IRC report, funded by UK Aid, examines the issues facing Syrian refuges who flee to cities in Lebanon and Jordan hoping to find suitable work. The best way to help these refugees, the report argues, is to steer them to opportunities that lead to long-term work. Photo: Jacob Russell/IRC 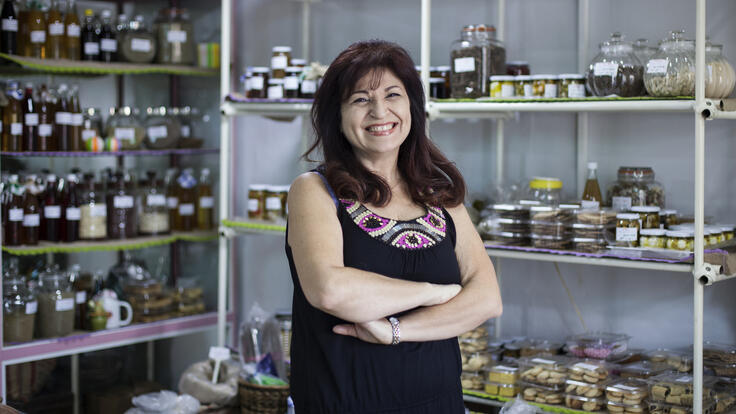 Suzanne is a Lebanese woman from Beit Mery in Mount Lebanon. The IRC provided her with a grant to open a business selling homemade food.

Following this approach, the IRC is providing direct cash relief and creating income-generating activities for over 30,000 vulnerable people in Lebanon. Small grants, more than half of which have been awarded to women, are helping entrepreneurs establish microenterprises guided by rigorous business plans and business counseling. Photo: Jacob Russell/IRC 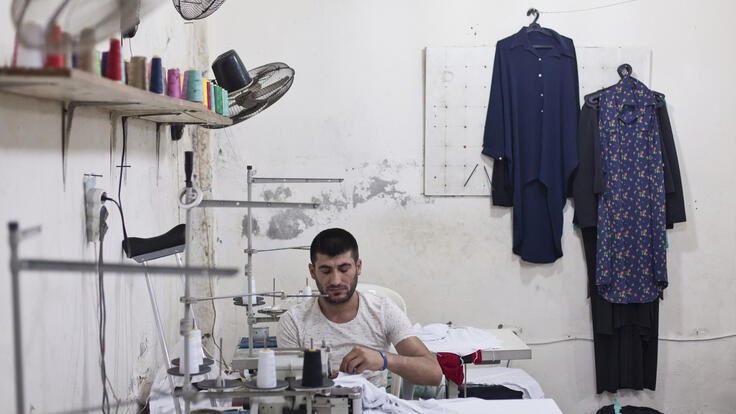 Mohamed from Kobanî, Syria, was unable to follow his family to Europe because of a disability. He found himself alone and unemployed in Beruit. The IRC provided him with a tailoring apprenticeship.

The IRC has placed more than 300 apprentices with some 200 employers in Beirut and northern Lebanon. One major advantage of the program: the IRC closely vets each employer and clearly explains the rights of apprentices. The exploitation of Syrian refugees has become a growing concern. Photo: Jacob Russell/IRC 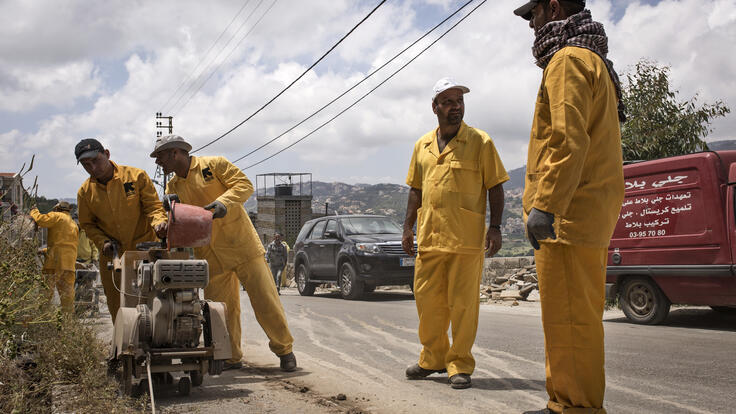 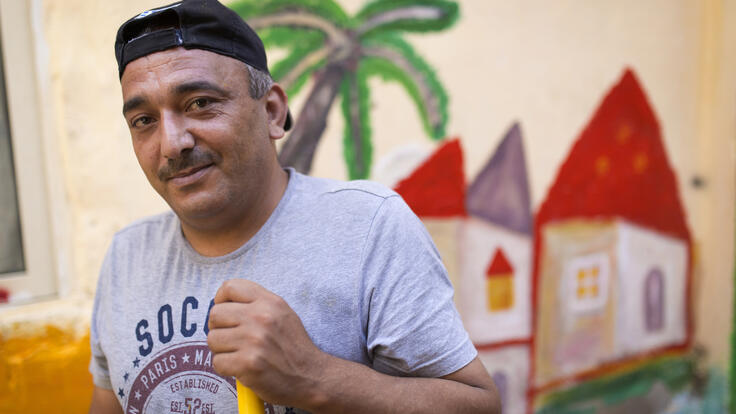 Yusef from Aleppo came to Beirut with his family after his wife was killed and his home destroyed by an airstrike. The IRC pays him to work on projects to improve local neighborhoods. Now Yusef no longer must send his children to sell tissues on the street to make ends meet. Photo: Jacob Russell/IRC 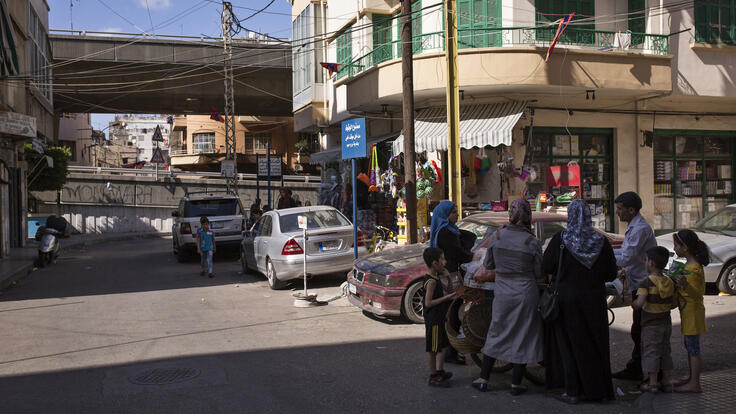 Syrian refugees in Lebanon find themselves living alongside locals who also are struggling. The increasing competition for jobs, as well as rising demand for health care and education, can lead to tension between these groups.

To improve relations, IRC work projects welcome both refugees and locals. The goal is to improve communities, grow businesses and expand job opportunities. Allowing refugees to participate in economic life has benefits for the host community. Photo: Jacob Russell/IRC

With 60 percent of refugees worldwide living in cities rather than camps, cash has proven to be an effective way to reach them faster and at lower cost. The International Rescue Committee recently released a report outlining how cash works as a short-term solution for the most vulnerable individuals, but a combination of long-term economic opportunities such as jobs and skills trainings are critical. Read our report.