From life in limbo to refuge in Utah

Bar Mee and her husband Tin Win could not see a future for their young family in a refugee camp -- and with civil war still raging in Myanmar, going home wasn't an option. Then the United States offered them refuge.

The world’s longest civil war pushed 10-year-old Bar Mee out of her country without a chance to say goodbye.

As fighting engulfed the densely jungled corner of Myanmar (also known as Burma) where she grew up, Bar Mee made a desperate bid to reach safety in one of the refugee camps just across the border in Thailand. She wasn’t sure she would ever see her home again – or if she would even be welcome. She asked herself, “What are they going to do with me? Is this a safe place? Are they going to catch me and send me back?” 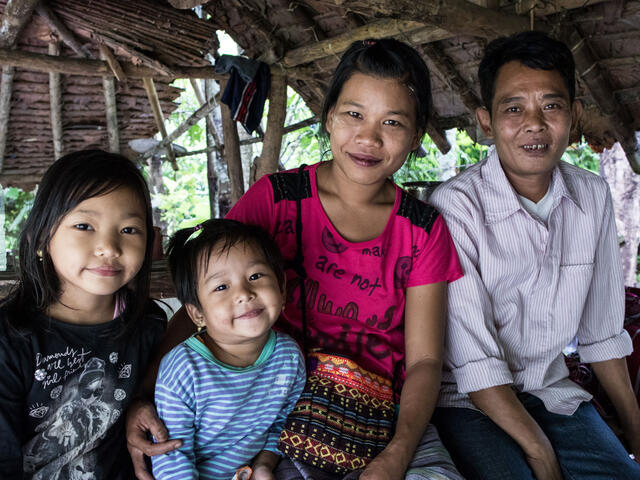 Twenty years later Bar Mee was still living in the largest of the camps, Mae La. It’s a sprawling and bustling settlement of some 40,000 residents, nestled amid misty hills just three miles from Myanmar.

Bar Mee married in the camp, and has two small daughters — seven-year-old Moo Phaw Shar and three-year-old Moo Phaw Htoo. Her husband, Tin Win, is also Burmese, but has never seen his home country. Like many of the more than 100,000 refugees living along the border, he was born and raised in Mae La knowing nothing but its bamboo homes, modest shops and muddy alleyways.

Refugees living in Mae La and the other camps rely almost exclusively on support from the International Rescue Committee and other aid groups. And while they have what they need to survive, it’s a life in limbo – especially for the children, whose parents want to give them a brighter future.

For families like Bar Mee’s, returning to Myanmar isn’t an option. Although the country has emerged from nearly 60 years of military rule, violent conflicts continue to rage between several ethnic groups and the government, and many refugees aren’t convinced that it’s safe to return. Those who were born in the camps are skeptical about what a country they’ve never seen has to offer them – particularly where war and natural disasters have left over a million people in need of aid.

Bar Mee and Tin Win are among the lucky few who were offered another option: a chance to start a new life in the United States. Worldwide, just one percent of refugees are invited to resettle in a third country to rebuild their lives. 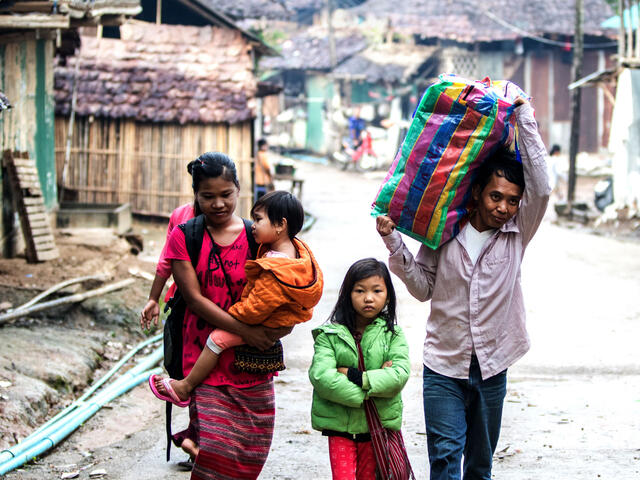 Bar Mee, Tin Win and their girls head to the bus that will take them to the airport for the long trip to Salt Lake City.
Photo: IRC

“We don’t know what to expect but hope our children will get a good education and our family will get the help we need,” said Tin Win. “We’re doing this for our children.”

Through our resettlement support center in Thailand and Malaysia and our 29 offices in the United States, the IRC helps refugees like Tin Win and Bar Mee start new lives, preparing paperwork and security checks, introducing them to American customs, and even teaching them how to use appliances in an American home —novelties in a community without electricity or running water. The IRC also assists refugees on their paths to becoming permanent U.S. residents, and eventually citizens. 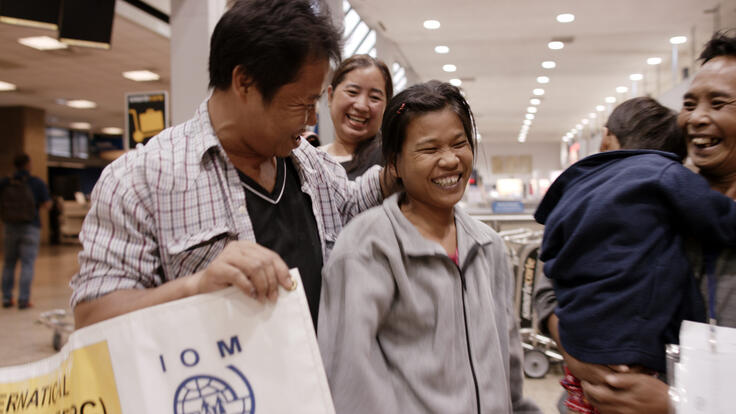 Tin Win’s Uncle Shriba was there alongside IRC staff to greet the family at the airport. The IRC had previously helped him resettle in Salt Lake City.
Photo: IRC

When their flight landed in Salt Lake City, Utah, this summer a new life began for the family. IRC staff met them at the airport — and so did Tin Win’s uncle, Shriba, who had already resettled in the area.

The IRC drove the family to an apartment that was already furnished and stocked with the essentials. “I like my new kitchen,” said Bar Mee, who immediately started planning a meal of pork, peppers, rice and coriander.

Unsurprisingly — and like the hundreds of thousands of refugees America has welcomed before them —the family is already settling in. Moo Phaw Shar is enrolled in the second grade, and Tin Win is taking English classes. Bar Mee is due to join him once preschool begins for their younger daughter.

He said smiling, “We are now in the U.S.A. and have more than everything we need.”

On Jan. 27, 2017 the president signed an executive order to suspend the U.S. refugee resettlement program. Learn why and what's next.

The IRC has resettled over 160,000 refugees from 50 countries over the past forty years. In 2015, the IRC resettled more than 10,000 refugees in the U.S. Read about our refugee resettlement work.

Refugees today live in limbo in camps for 17 years on average, until they can safely return home or find refuge in another country. But refugee camps are only temporary solution; people who have fled war and persecution need nothing less than a real home. That’s where resettlement comes in: a life-changing and often lifesaving solution for the world’s most vulnerable. You can help by supporting the IRC's work.