“There was destruction, violence… soldiers were killing everyone, indiscriminately. There was no other option but to flee.”

Timothy Cham, 61, glows as he exits a taxicab. His good humor, notwithstanding the 95 degree temperature and 87 percent humidity, is contagious. He joins his family outside their apartment complex in Baltimore, Md., unbothered by the East Coast heat. “It doesn’t compare to 120 degrees in Sudan,” he says with a smile.

Timothy, his wife, Abang Otong, and their two sons, Emmanuel and Akwai, came to Baltimore in October 2016 as refugees. Their story begins over 25 years ago, when Timothy first applied for resettlement with the United Nations. He escaped civil strife in the area that is now South Sudan, where conflict has only increased over the decades.

“There was destruction, violence,” he recalls. “Soldiers were killing everyone indiscriminately. There was no other option but to flee.” 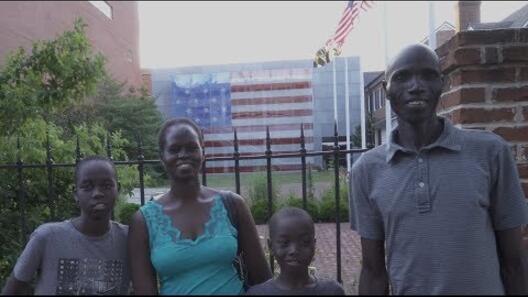 He made his way to Ethiopia, where he was able to live in refugee camps for a few years before a hostile regime took control of the country in 1991. Again, Timothy was forced to flee with no clear direction for his future. The prospect of returning to his home meant certain death.

While traveling in search of opportunity and safety, he met Abang, also a South Sudanese refugee, in the camps of southern Kenya. The couple moved from one refugee camp to the next before finding a more permanent placement on the outskirts of Nairobi, Kenya. There, Timothy and Abang welcomed their first son, and soon another.

Opportunity did not come easily in Nairobi. Getting a job as a refugee was difficult. As a talented painter, Timothy made a living by selling his artwork. Over the years, he and Abang watched their neighbors struggle with sickness, poverty and alcoholism. His sons wanted to go to school, but even if the family could afford it priority was given to citizens. 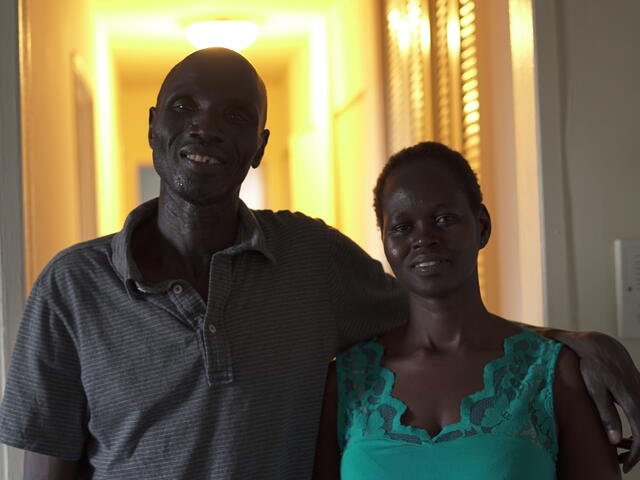 While traveling in search of opportunity and safety, Timothy met Abang, also a South Sudanese refugee, in a refugee camp in Kenya.
Photo: Sean Grossman/IRC

Timothy and Abang knew their family had no real future in Kenya. Every day, Timothy would be up by 4am to beat the lines at the U.N. office, hoping to get news on his petition status. His dream came to life in October 2013, when he was told his family would be going to the United States. It would take another three years of processing and waiting until a plane was ready to take them to a new life in America.

Their life in Kenya is now an increasingly distant memory, left across the ocean. With some initial support from the International Rescue Committee and U.S. government, the family has created a comfortable home and life for themselves. Emmanuel and Akwai can walk to school, and enjoy their free time playing soccer and basketball. The family often spends afternoons at the local park together.

Timothy and Abang, who both speak excellent English, found good jobs: Timothy works at a steel manufacturer 55 hours a week—hard labor, but he has embraced the opportunity. “I told myself I had to be strong,” he says. “I love it now. It’s become easy because I decided to love my job.” 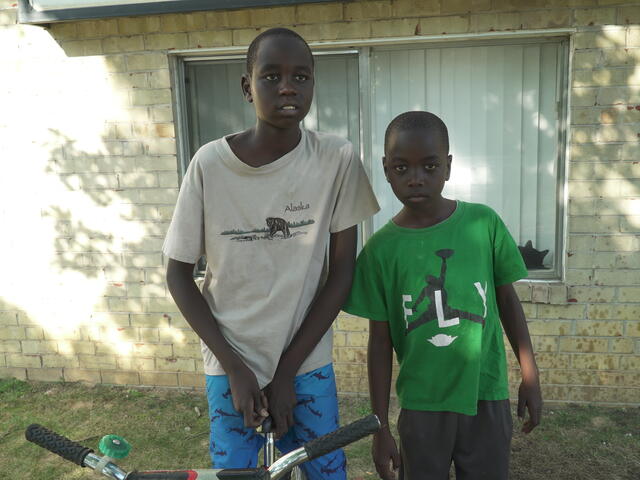 Timothy and Abang's two sons, Emmanuel and Akwai, are doing well in school in Baltimore. Education was out of reach for the family when they lived in Kenya.
Photo: Sean Grossman/IRC

While he’s at the plant, Abang provides guest services at a Hilton hotel in downtown Baltimore. She too puts in many hours, but finds the work rewarding. “It’s what I enjoy doing.”

In their spare time, Abang knits colorful Sudanese-style textiles as Timothy continues to paint. Acrylics are neatly stacked in the living room, depicting scenes such as herds of elephants in Kenya with impressive realism. A successful artist everywhere he goes, he was even invited to the president’s personal home in Kenya after painting an almost photographic portrait of the former president, Mwai Kibaki.

Now, standing proudly beside his art in his apartment in Baltimore, Timothy radiates a sense of perseverance, patience and hope, traits honed by so many years of waiting in uncertainty as a refugee.

“Becoming an American, to me, is the greatest thing I have ever achieved in my life,” he says. “God was delaying me until all this came together.”