Meet Alex Cruz: a 21-year-old who refuses to turn her back on asylum seekers

At the welcome center in Phoenix, Arizona, run by the International Rescue Committee, shelter specialist Alex Cruz usually doesn’t take breaks. But for a brief moment, she sat to share her story, at first slouching over with her arms wrapped around her stomach, her forehead resting on the table.

In July, Alex experienced abdominal pains at a family gathering. Thinking nothing of it, she called it a night and went home to rest. Then the uncontrollable shaking and vomiting began. She was rushed to the hospital, where doctors confirmed a serious flare up of a chronic condition caused by abdominal adhesions. Alex needed surgery immediately. 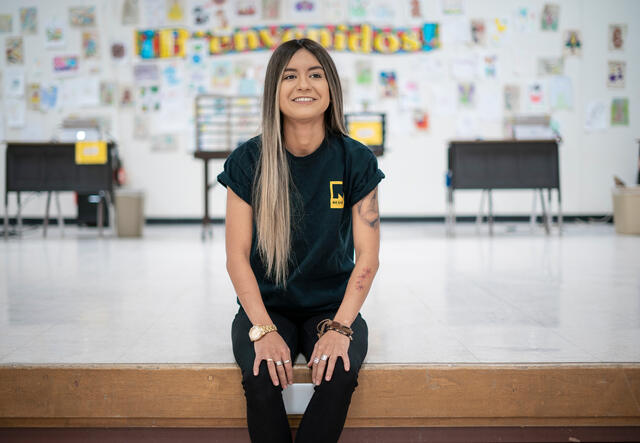 Alex Cruz is a shelter specialist at the IRC's welcome center for asylum-seeking families in Phoenix, Arizona. Despite being in constant pain from health issues she’s had since birth, Alex chooses to focus on assisting families looking for safety and protection. “My job is the only reason I get up in the morning,” she says.
Photo: Andrew Oberstadt/IRC

“There was a chance I wouldn’t make it out alive,” she recalls. “At one point, I remember reflecting on my life and asking myself: ‘Is this really all you did? Is this the mark you’re leaving behind?’”

Alex’s fear was not death, but the possibility of no longer helping the families seeking asylum. As a shelter specialist, Alex explains the services the IRC provides to them, gets them in touch with family sponsors, and helps them prepare for immigration court dates.

“If I can’t keep serving these people, then I don’t know what I can offer to anyone.”

Fortunately, Alex survived the surgery, but she continues to struggle with life-threatening medical issues she’s had since birth. Alex suffers from the effects of twin-to-twin transfusion syndrome, a prenatal illness where identical twins share a placenta, causing one to lose blood to the other. 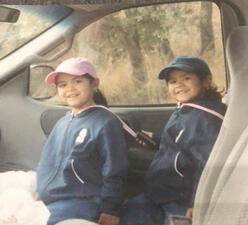 Alex (right) and her twin sister, Sam in Sonora, Mexico, where the sisters grew up before moving to Phoenix.
Photo: Courtesy of Alex Cruz

The condition is most often fatal for one or both babies, but Alex and her sister, Sam survived. Alex, however, has faced countless health scares like the one that threatened her life last summer.

In addition, when Alex turned 9, she tested positive for leukemia. Now 21, she lives with constant pain, weakness and fatigue. She worries it’s only a matter of time before her health turns for the worse. But Alex refuses to give up her work.

“I get strength from what [the families] have gone through,” she says. “Regardless of being sick…it's really hard for me to stay in bed. It seems like their struggle is way bigger than mine.”

She pauses, then continues. “You know, if I go to the doctor and get a lot of medication, maybe I can fix my issues, but theirs won't be fixed. It's a really long process for them. So why should I sit when they're on their own two feet? I got to be on my two feet too.”

“These are fathers, mothers, children…”

It’s 10 am at the IRC welcome center, formerly an elementary school, where the IRC provides food, water, clothing and overnight shelter, along with basic medical assistance and legal counseling, to people who have crossed the U.S.-Mexico border seeking safety.

Alex greets two families who have arrived at the center. “Families, I’m going to give you an explanation of everything that is going to happen here,” she tells them in Spanish. “First, you’re in Phoenix, Arizona. You’re not being detained. We’re not part of immigration. We’re the International Rescue Committee.” 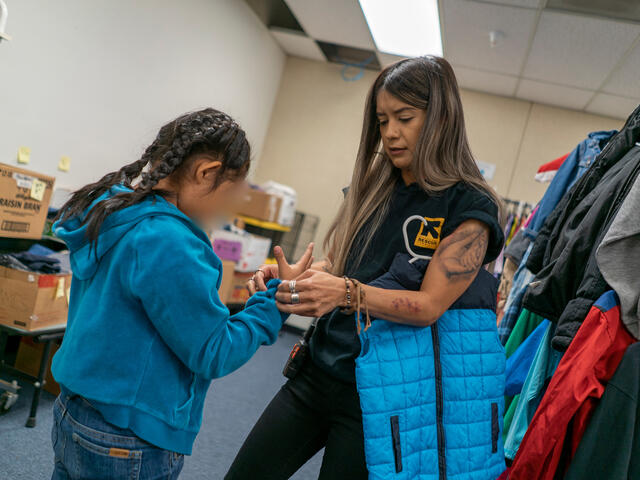 Alex helps 7-year-old Maria try on a new coat at the IRC welcome center, where the IRC provides families with fresh clothing and other essentials after their long journey to the U.S. border and time in detention.
Photo: Andrew Oberstadt/IRC

She then talks with Marta and Julio*, a couple from southern Mexico who fled from dangerous gangs with their three young children. They sit at a desk in front of a large Bienvenidos ("welcome") sign surrounded by colorful art made by children at the center.

Alex takes down Marta and Julio’s basic information so she can help them contact their sponsor family in the U.S. She explains the additional services the family will receive while at the center and makes sure Marta and Julio record the dates for their asylum hearing. Slowly, the family begins to relax.

Before Alex joined the IRC, she was working as a detailer at an auto body shop in Arizona.

As a Mexican-American, she was distressed by news reports about the hardships suffered by asylum seekers, and about immigration officials failing to provide help. 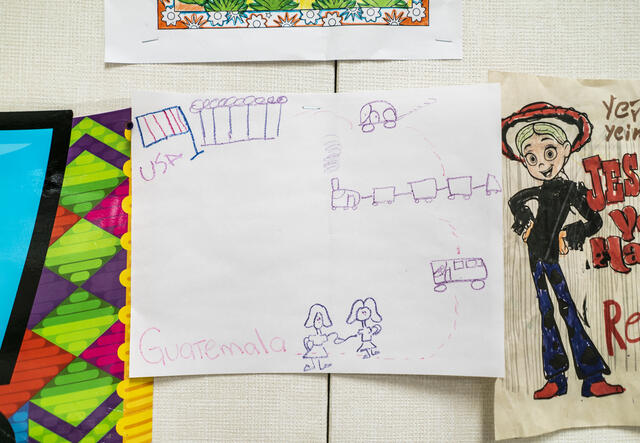 A drawing made by a child from Guatemala at the IRC welcome center shows a fence with barbed wire, a U.S. flag, and two people holding hands.
Photo: Andrew Oberstadt/IRC

“I couldn’t grasp what was happening to these families who were just looking for protection and safety,” she says. “These are fathers, mothers and children…you can’t put a monetary value on that.”

Today, Alex is making a difference. She has reached Marta and Julio’s sponsor and is able to tell the family that they have bus tickets that will take them to their temporary home. Alex sighs with relief. Families want nothing more than to be reunited with their loved ones.

I get strength from what [the families] have gone through. Regardless of being sick…it's really hard for me to stay in bed. It seems like their struggle is way bigger than mine.

Next, Alex accompanies the family to a medical check-up and then brings them to the “ropa room,” which she describes as a free-spirited and magical place. Ropa is Spanish for clothing, and the room is filled with clothes, shoes, coats, undergarments, toiletries and baby supplies. Alex explains to Marta that she can pick out anything for herself and her family—for free. Marta breaks into tears.

“No, don’t worry,” Alex tells her, speaking Spanish. “We’re here to help. These services are from the heart, truly. Go get some clothes and get cute!”

“It's overwhelming at times,” Alex says later. “Families arriving in America are anxious but also feel a sense of freedom. We want to remind them that they have strength and worth.” 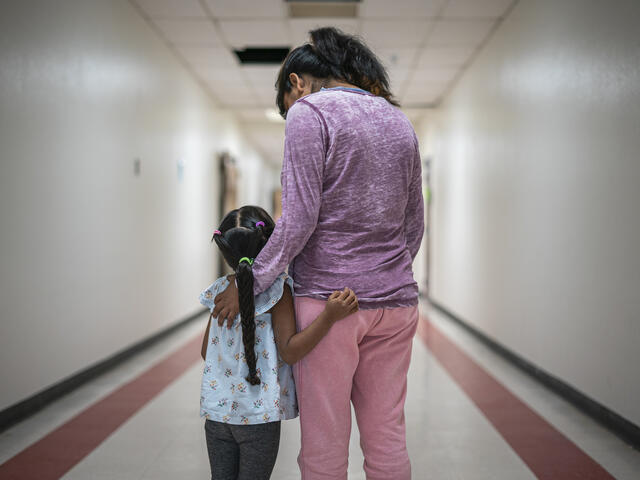 “What they give is larger than what I provide”

Whenever she can, Alex tries to set aside time to talk and connect with families. “For many of these families, especially the moms, they haven’t talked to anyone about what they are truly feeling. It’s therapeutic for them. All the emotions, frustrations, sadness, anger and fear come out.”

Alex initiates a conversation with Alejandra, who left Mexico to seek asylum in the U.S., where she hopes to find safety for herself and her 5-year-old daughter, Ana. 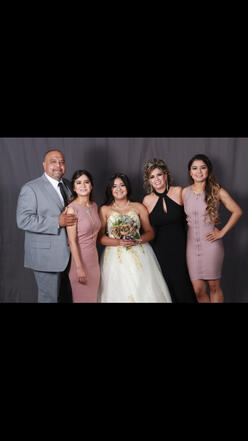 Alex (far right) celebrates her younger sister's quinceañera (15th birthday) with her family, whom she describes as an "incredible support system."
Photo: Courtesy of Alex Cruz

“This was the only choice I had to protect my daughter,” says Alejandra. It is hard for her to tell her story without crying. But at the IRC center, Alejandra has found comfort. “For the first time, I see Ana happy again. Her spirits are high, and she feels like she’s in a better place.”

“Most of the time, my job is the only reason I get up in the morning,” says Alex, reflecting on Alejandra’s gratitude. “I think I live to work, not work for a living. I get strength from what [these families] have gone through. What they give is a lot larger than what we are able to provide.”

Alex must live with the uncertainty of her health, and the worry that cancer may return. But between her colleagues and family, she has a solid support system.

“I’m not meant to last forever,” she says, “but hopefully our impact on these people does.” 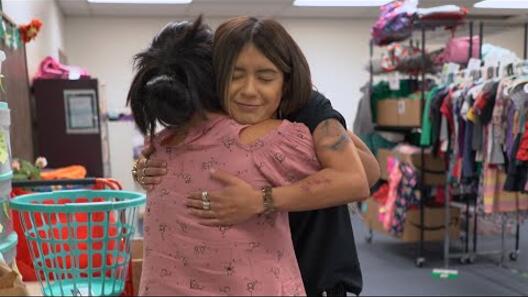 *Names have been changed for security and to protect privacy.

How you can help asylum seekers

In Phoenix, Arizona, the IRC and its local partners are providing food, water, basic medical assistance, legal counseling, clothing and overnight shelter to people who have crossed the U.S.-Mexico border to seek safety. Since its opening last summer, the IRC center has helped more than 600 asylum seekers. Here are six ways you can help.