Firas* remembers the day he received a desperate plea for help from a man he’d never met. “He was Syrian and was stuck in Moria refugee camp on the Greek island Lesbos,” Firas recalls. “He said he couldn’t trust anyone, that everyone was lying and he was going to kill himself.”

A Syrian refugee himself, Firas understood the stranger’s dilemma. He offered words of reassurance. “I told him, ‘I was in your situation, but look how different my life is now, and yours will be, too.”

Firas, 22, worked with Refugee.Info, a digital service created by the International Rescue Committee in partnership with Google, Microsoft and Trip Advisor. The online and mobile platform provides crucial information to refugees seeking asylum from war and persecution. In this case, Firas, then living in Athens, was able to assist someone on the other side of the Aegean Sea by listening to his needs and providing counsel.

“The man told me I’d given him hope and he would persevere,” Firas says. ”I knew how our refugee clients felt, and could help them by providing answers.”

Refugee.Info, launched in Greece in 2015 and expanded to Bulgaria, Serbia and most recently Italy, is primarily accessed through its website or Facebook page and is designed to be easy to use on mobile phones. Refugees can access local support services—where to find shelter and access to legal aid, transportation and medical facilities—in Arabic, Farsi, French and English. Fellow refugees serve as site moderators to answer questions and tailor the service to meet the specific needs of their clients. 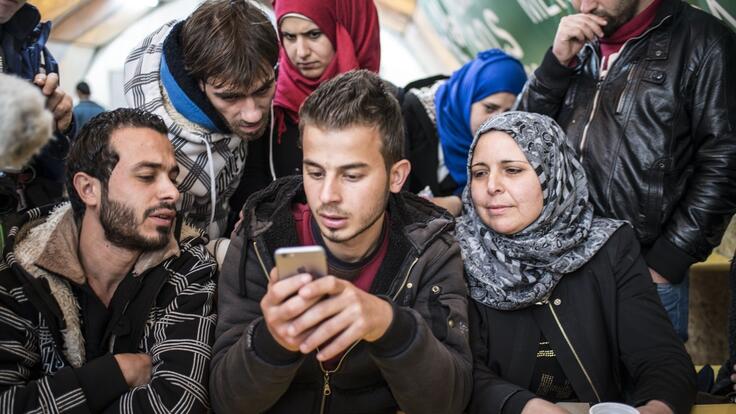 Using Refugee.Info on a mobile phone or computer, refugees in Europe can find shelter and access to legal aid, transportation and medical facilities. The service was created by the IRC in partnership with Google, Microsoft and Trip Advisor.
Photo: Monique Jaques/IRC

While Firas is proud of the work he has done, it isn’t exactly what he had planned for his life. In fact, his ambitions were once very different. “I was studying biomedical engineering in Syria,” he says. “It’s a new field that brings medicine and engineering together. It’s all about using technology to help human beings—for example, developing artificial heart tissue or robotic prosthetic limbs.”

He completed two years at Damascus University before the war changed everything. His father, a teacher, had to pass through military checkpoints to get to work each day. One day he didn’t come home. It was also the day Firas’s mother, far into her pregnancy, went into early labor.

“We rushed to the hospital and I remember running with the nurses, pushing my mother on a hospital bed to the operating room,” he says. She had an emergency Caesarean, and I was the first person to hold my baby sister. My father was able to come home, and we called my new sister Sara.”

But by the time Sara had reached age two, the family knew they had to leave Syria. Firas stayed behind, but soon realized the danger was too great. “I, too, was forced to flee. I traveled alone to Turkey and then continued on to Greece.” There he reunited with his extended family—uncles, aunts and cousins—in a makeshift camp in Idomeni, a small village on Greece’s northern border.

I knew how our refugee clients felt, and could help them by providing answers.

“We were 48 people in 13 tents, enduring the cold, the wind, the rain,” says Firas. At the time, overwhelmed European nations were closing their borders to new arrivals, and Firas found himself moving from one camp to another, one of thousands of refugees whose lives were in limbo.

All the while, Firas strove to keep active, continued his education by taking computer courses online, and helped others. “I was living in a camp near Thessaloniki and I saw lots of food being wasted,” he recalls. “I decided to collect it for people in need, many of whom were Greek.” Then Firas discovered Refugee.Info.

“There were so many rumors flying around: ‘The border will open tomorrow…There’s a new route to go north.’ Through Refugee.Info, I found accurate information about what was actually happening. Eventually I became an official moderator.” 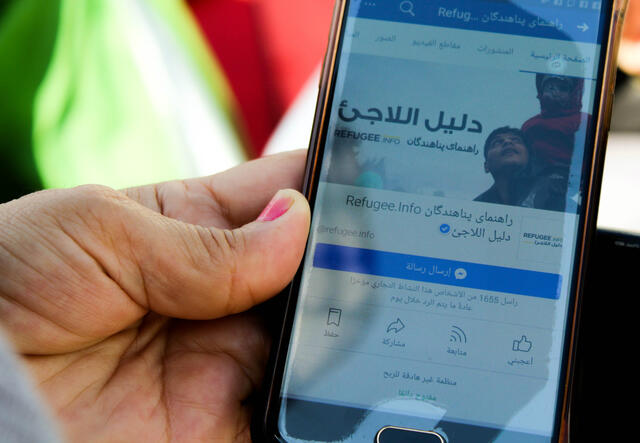 More than 600,000 people in Europe have accessed Refugee.Info resources, which are available in Arabic, Farsi, French and English. The IRC and its partners are launching similar sites in Jordan and El Salvador.
Photo: Daphne Tolis/IRC

Firas and his family now live in Germany. His girlfriend, Anna, whom he met while she was volunteering in Greece, is from Germany and has helped the family adjust to their new home. “Anna’s grandparents invited me to spend Christmas with them. They are kind people and welcomed me into the family. They are open to the fact that their granddaughter’s boyfriend is a refugee from Syria!”

Firas, who was separated from his baby sister for most of their years living in the camps in Greece, is getting reacquainted with Sara. “After two years apart she was too shy to come to me,” he says. “I was sad because in Syria I could always comfort her, and in Germany she saw me as a stranger.… Now when Sara learns something new, like a German song at kindergarten, she comes to me to sing it!”

Life in Germany is by no means secure for Firas. “I’ve been here for four months now, and I don’t want to give my family the false hope that we’ll be together from now on. I’ve been officially relocated to France, where I know no one. I have appealed to the court and am hoping to stay in Germany. We are waiting to find out.”

*Names in this story have been changed to protect privacy

Based on the success of Refugee.Info, similar sites are being launched in Jordan and El Salvador, under a new global platform, Signpost. Learn more.