A new life for 4-year-old Nasrin

A proud and grateful father reflects on his family’s journey from Iraq to England—a last-minute flight to save his daughter’s life.

As Hiba brushes her daughter’s hair, getting her ready for the first day of preschool, 4-year-old Nasrin chats away excitedly. She grins as she brushes her teeth and talks about how much she loves her mummy while she puts on her shoes.

Apart from a small scar at the bottom of her neck, barely visible at the top of her T-shirt, no one would know that Nasrin has had two rounds of open-heart surgery. 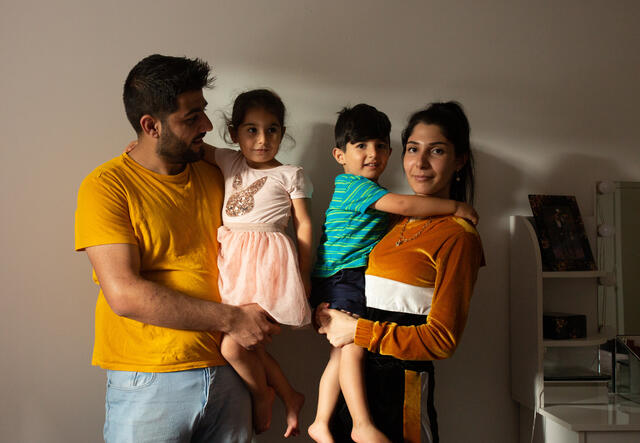 My children give me strength and courage.” Kurdish-Syrian refugees Maasom and his wife Hiba have been living in Andover, in southeastern England, for almost three years. They have two children, Nasrin and Omar.
Photo: Elena Heatherwick/IRC

“I still cannot believe that Nasrin now is growing and learning,” says Maasom, her father, as he walks with Nasrin hand in hand to school.

The flight to life

The family now live in Andover, a market town in southeast England. Kurdish-Syrian refugees, Maasom and Hiba were living in a refugee camp in Iraq when Nasrin was born. She seemed like a normal, healthy baby … until her skin turned blue.

Nasrin in the hospital in Iraq.
Photo: Nasrin&#039;s family

“We took her to the doctors,” says Maasom, “Her oxygen level was 45 percent.” A normal level is 95 or above.

A heart scan revealed that Nasrin needed a procedure that required two complicated operations—and Iraq did not have necessary medical facilities. “We had to find a way to take her abroad,” says Maasom.

The family applied for resettlement to a third country. Meanwhile they waited. “We were always worried and concerned and scared of unexpected incidents,” says Maasom. “Her body turned blue on several occasions. One time she had a convulsion where she passed out because of a lack of oxygen.” The family made do with temporary treatment for a year and three months. “Luckily, we managed to come to the U.K.,” says Maasom. 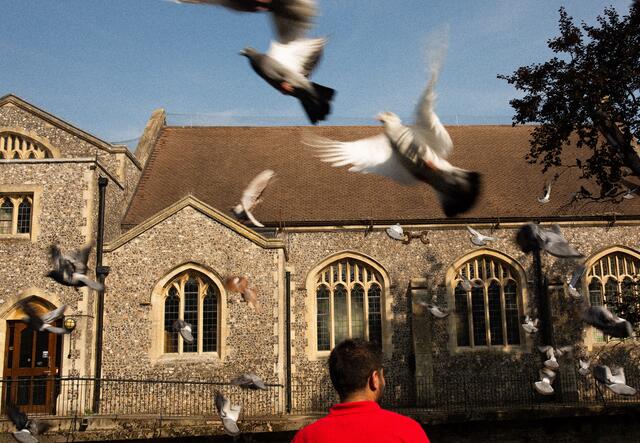 “The feelings of alienation were new to us and very difficult to comprehend," recalls Maasom of the family's first days in the U.K.
Photo: Elena Heatherwick/IRC

Nasrin was accepted by the United Kingdom's resettlement program, which gives a small number of vulnerable individuals the chance to rebuild their life in the UK.

Nasrin’s journey to England was touch and go. “On the way from Turkey, Nasrin’s condition became unstable,” says Maasom. “She suffered from a lack of oxygen and a high fever.” 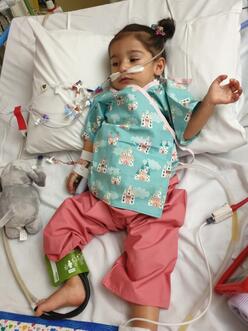 Nasrin in the hospital for surgery.
Photo: Nasrin&#039;s family

Upon arrival, the family were taken straight to Southampton Hospital, where Nasrin was stabilized and prepared for the first of two surgeries. The operation lasted eight hours.

“It was a really hard feeling,” recalls Maasom. “There was no one around to support us emotionally in these circumstances. We were on our own.”

After 40 days, and a second operation, the family was able to travel to their home in Andover to start life in their new country

“Life in the U.K. is very beautiful, if you get it right,” Maasom says, explaining his qualifier. “My language is still weak.” Despite their time in a refugee camp, he and his wife experienced unfamiliar feelings of alienation. They received support from the Hampshire county council, which in turn introduced them to the International Rescue Committee. The IRC recently had started a program to help resettled refugees integrate into southeast England.

“With the IRC cultural orientation program, we learned new things we didn't know before,” says Maasom. 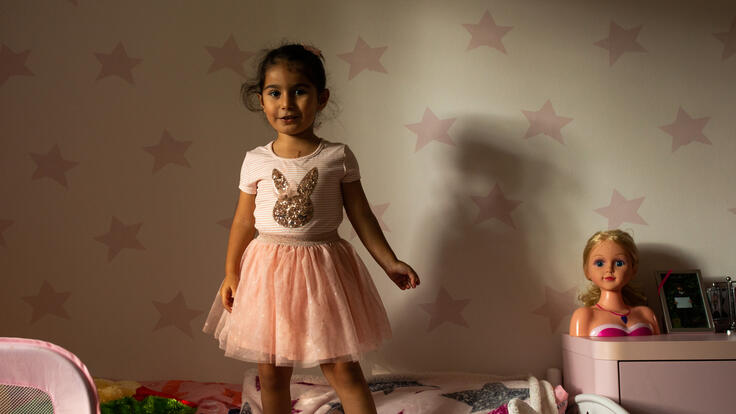 “We learned about our rights and obligations. We have a better idea of how to book appointments with the GP [general practitioner], how to get a driving licence, how to apply for a job.” 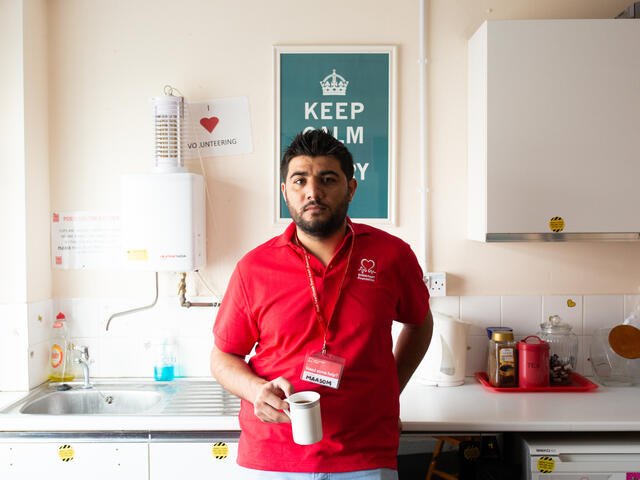 Maasom volunteers for the British Heart Foundation, a charity that funds research into heart and circulatory diseases like the one that nearly took his daughter’s life.
Photo: Elena Heatherwick/IRC

Maasom started volunteering at the British Heart Foundation, both to make friends and improve his English. “We are trying to learn and improve ourselves and to adapt to life in the U.K.”

Today Nasrin is a confident girl who makes friends easily and dreams big. When she returned home from her first day at school, she was beaming. “Oh, I have friends now! We were playing together." 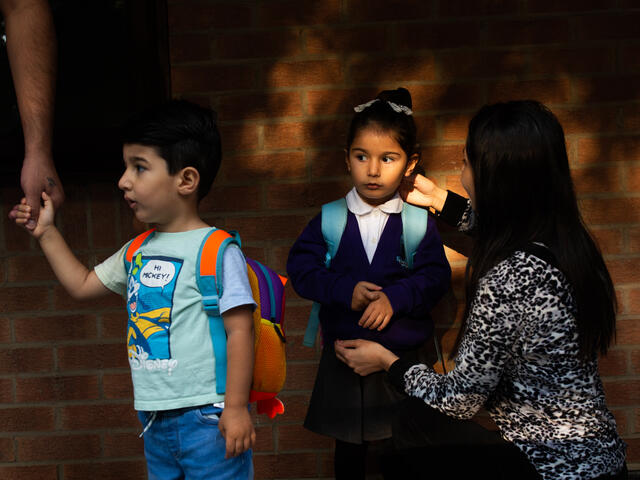 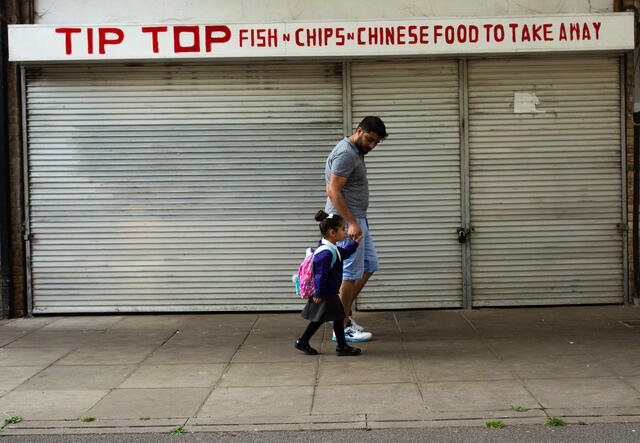 Proud father Maasom walks Nasrin to school. “She always tells me that she wants to be a doctor,” he says.
Photo: Elena Heatherwick/IRC

Maasom can’t be prouder of his daughter, or more thankful for their new life. “It's a great feeling seeing Nasrin going to school,” he says. “For my children to grow up and study here [in the U.K.], they’ll have many opportunities. That's what gives me hope to keep going.” 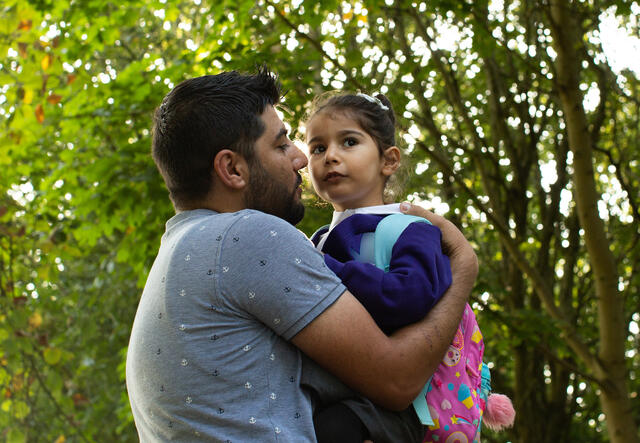 “When Nasrin got treated, it was a wonderful feeling,” says Maasom. “We can’t believe that she has recovered.”
Photo: Elena Heatherwick/IRC

Video
"My children give me strength and courage": life as a refugee in the UK

The Refugee Integration in Southeast England (RISE) project is part-funded by the European Union’s Asylum, Migration and Integration Fund and Khalsa Aid International. This story was originally published by IRC-UK.