A Syrian family’s overwhelming struggle to survive in Zaatari camp

It’s another dusty day in Zaatari refugee camp when I meet 46-year-old Abu Raed at the International Rescue Committee’s health clinic. He seems to be well-known, everyone greeting him while we make our way to an empty caravan where we can talk. We sit facing one another. His skin has been scalded by the hot desert sun, and his eyes express deep sadness.

Abu Raed is from Dara’a, Syria, where he worked as a school janitor. “We came here to Zaatari almost five years ago because of the clashes between opposition forces,” he tells me. “We wanted to get away from that.”

Abu Raed and his wife, three sons and two daughters journeyed across the berm, a no man’s land between the Syrian and Jordanian borders, to reach the camp. But conditions at Zaatari proved challenging for the family, especially when Abu Raed’s health started deteriorating. “First, I suffered from a cough, but I didn’t think too much of it. Then, I felt discomfort in my chest, so I went to the hospital."

He was diagnosed with asthma and given an inhaler, but his condition only worsened; he became sensitive to everyday odors—fried food, perfume, smoke, the ever-present dust. As his sensitivities increased, work opportunities faded. “I’ve been here in the camp for almost five years, and so far I haven’t been able to secure a job,” he says. 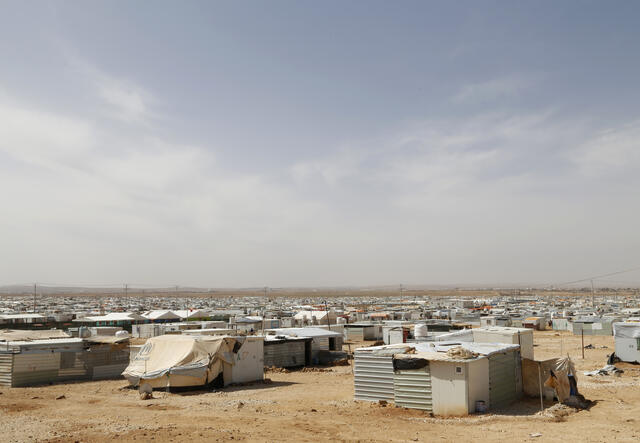 Last June, Abu Raed got some good news—an IRC health clinic opened its doors just five minutes from his caravan. One of only two primary health clinics in the camp, the facility can accommodate 200 patients a day, providing not only primary and reproductive health services, but also health and lifestyle education.

“I come here regularly, and I feel better,” he says. “Dr. Mohammad Al-Omari has treated me extremely well. He’s the one who has followed my case and made me feel better. The first time I came to him, I was suffocating … I was begging him to save me.”

He describes moments when his condition becomes so severe that he feels a dying sensation, relieved only with an injection and oxygen supplied by the clinic. For asthma patients, the dying sensation is a result of chest pain and shortness of breath.

Dr. Al-Omari recalls that when Abu Raed first visited the clinic, he was disoriented, semiconscious, because of the low levels of oxygen in his blood. The doctor eventually prescribed a hydrocortisone intravenous drip. “We don’t really have an emergency section here, but we do our best to deal with such cases.” 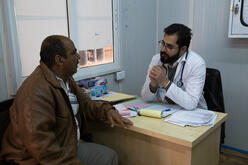 Abu Raed visits Dr. Mohammad Al-Omari at the IRC's health clinic in Zaatari refugee camp for a check-up and advice on how to manage his asthma.
Photo: Kaity Kawar/IRC

Abu Raed has developed a further complication. He now suffers from agoraphobia, an anxiety disorder precipitated by perceptions that one’s surroundings are unsafe. “He definitely needs psychological support to parallel his medical treatment,” Dr. Al-Omari tells me, noting that the majority of Zaatari camp residents suffer from psychological as well as physiological disorders. Abu Raed is grateful for the clinic’s treatment, but harbors feelings of guilt. “I’m just living day to day on charity, and I feel bad,” he says. “I want to live in dignity.”

After talking in the empty caravan, Abu Raed insists I visit his home—he wanted me to bear witness to his weary living conditions. We make our way to his white caravan, one among thousands in the camp. A blanket covers the entrance to the trailer. Inside, his two adolescent boys sit on the floor, their legs bent awkwardly, feet at backward angles. Abu Raed tells me they are paralyzed.

“Because they were frightened by the bombings [in Syria], my two sons, 15 and 16, collapsed and never stood up again,” he explains. “Many organizations came to see them, and they tried physiotherapy, but nothing seemed to work with them.” I try to converse with the boys, but they barely speak a word. They shyly tell me that they want to go back to school. I learn, talking patiently, that they have lost sensation in every part of their bodies, so it is difficult for them to write or even read.

Abu Raed’s adolescent daughter comes into the caravan, a shy girl, quick to hide. She has beautiful deep-blue eyes. Abu Raed tells me that she also suffers from trauma, which has caused her to develop epilepsy. “Sometimes, my daughter falls and starts trembling,” he says. “She’s only 17 years old.” 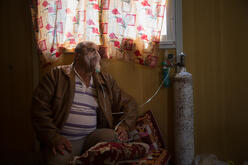 Abu Raed often relies on an oxygen mask to treat his asthma. He describes the chest pain and shortness of breath he experiences as a "dying sensation."
Photo: Kaity Kawar/IRC

Before the war, Abu Raed says, his children were fine. “They used to go to school and lead a normal life. Now, they just sit at home all day.” The pressures of life in the camp also took a toll on Abu Raed’s marriage; he and his wife have divorced. She, too, is ill and can barely walk, so his children are left unattended while Abu Raed looks for work. For a time, the children were transported to a special school in wheelchairs, but those services were short-lived—the resources in Zaatari camp are stretched too far.

Abu Raed’s eldest son managed to work for a period, earning enough to keep their household intact. That job has ended—the family’s condition is dire. “We live on people’s charity,” Abu Raed repeats. “Sometimes our neighbors give us food—that’s how we live.” Each family member receives US$28 in food vouchers every month, but the aid cannot sustain them.

It is difficult to ask Abu Raed about his hopes for the future, but I do. “I don’t want anything in this world except for my family and I to live a dignified life,” he says.

The IRC’s clinic in Zaatari refugee camp in Jordan is supported by aid from the United Kingdom.