A Syrian ten year old’s decade in a refugee camp

Meet Nawras*,  a 10 year old whose name means “seagull” and whose best friend is a rooster.

Nawras and his family are among the 675,000 Syrians registered as refugees in Jordan. His parents Adham and Samar had to flee their home in Damascus in November 2012 as the war in Syria intensified.

Samar was expecting their first child—she gave birth to Nawras just three days after arriving in a new refugee camp set up in northern Jordan.  A decade later, that camp—Zaatari—has grown into a small city with a population of more than 80,000. 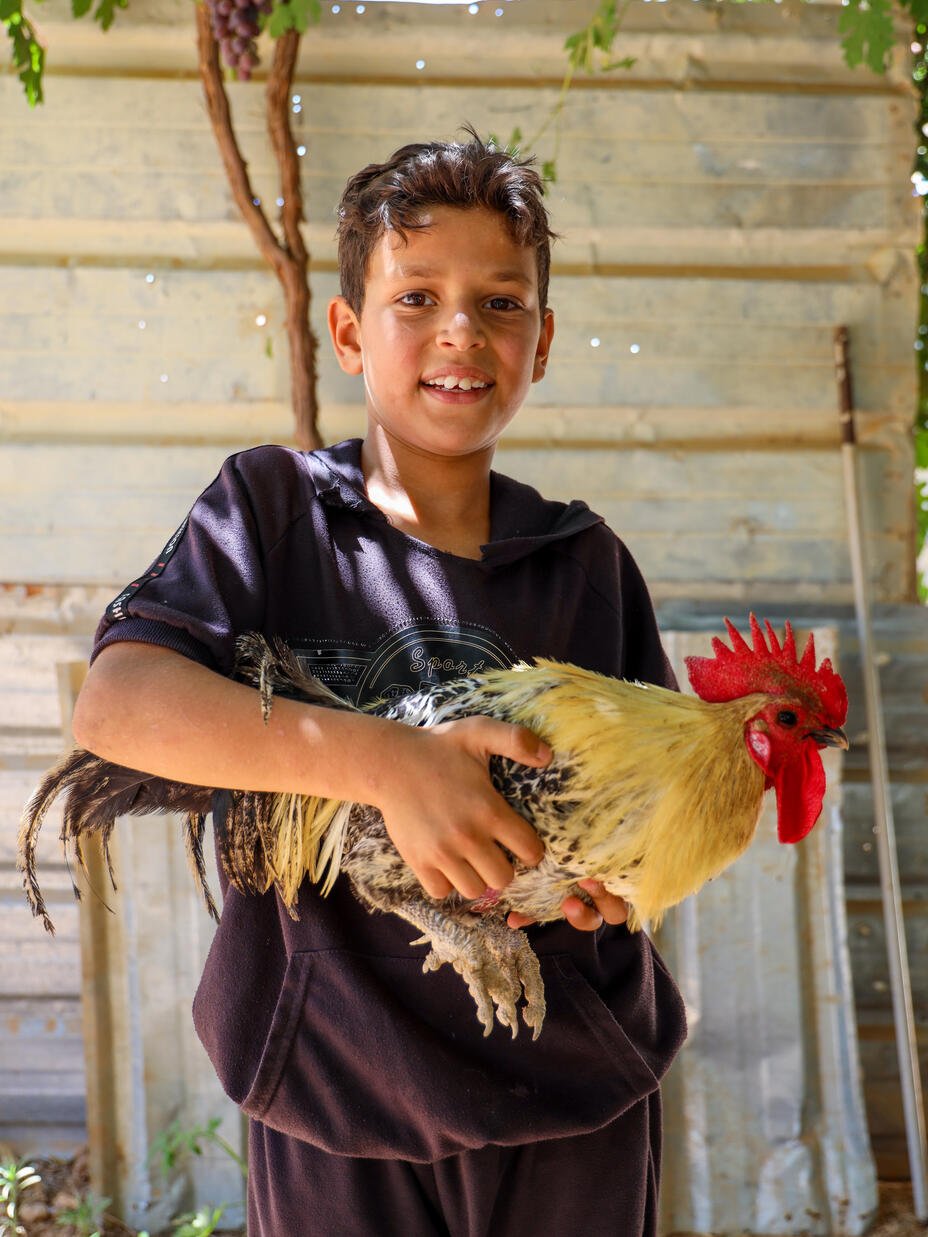 Narwas, 10, and his pet rooster at home in Zaatari refugee camp in Jordan.
Photo: Ahmad Al-Jarery for the IRC

Nawras and his brother Joud, 8, and sister Bisan, 5, are three of the approximately 30,000 children who have been born in Zaatari. Most of them have never lived anywhere else.

Nawras has only left the camp once in his life, for a three-day visit to his uncle in Irbid, Jordan last year. Such trips are rare as transportation is expensive and Zaatari is far from urban centers.

I would love to live outside the camp.

“I saw big buildings and trees, and there was a wall made out of stones,” Nawras says, recalling his visit. He proudly describes how he walked along the top of the wall and wasn’t afraid.

“I went as far as I could and got back all by myself.  I would love to live outside the camp.”

At home with Nawras

Nawras’s family have lived on the same block since they arrived in Zaatari. "We used to live in tents, but now there are caravans and better bathrooms,” his father Adham says of the improvements camp residents have seen over the years. “We have electricity for 12 hours daily, from 12pm to 12am."

But settling into the camp proved difficult at first: Not long after they arrived, the family were displaced from their tent by torrential rains, and then—shortly after they moved back in—it burned down. 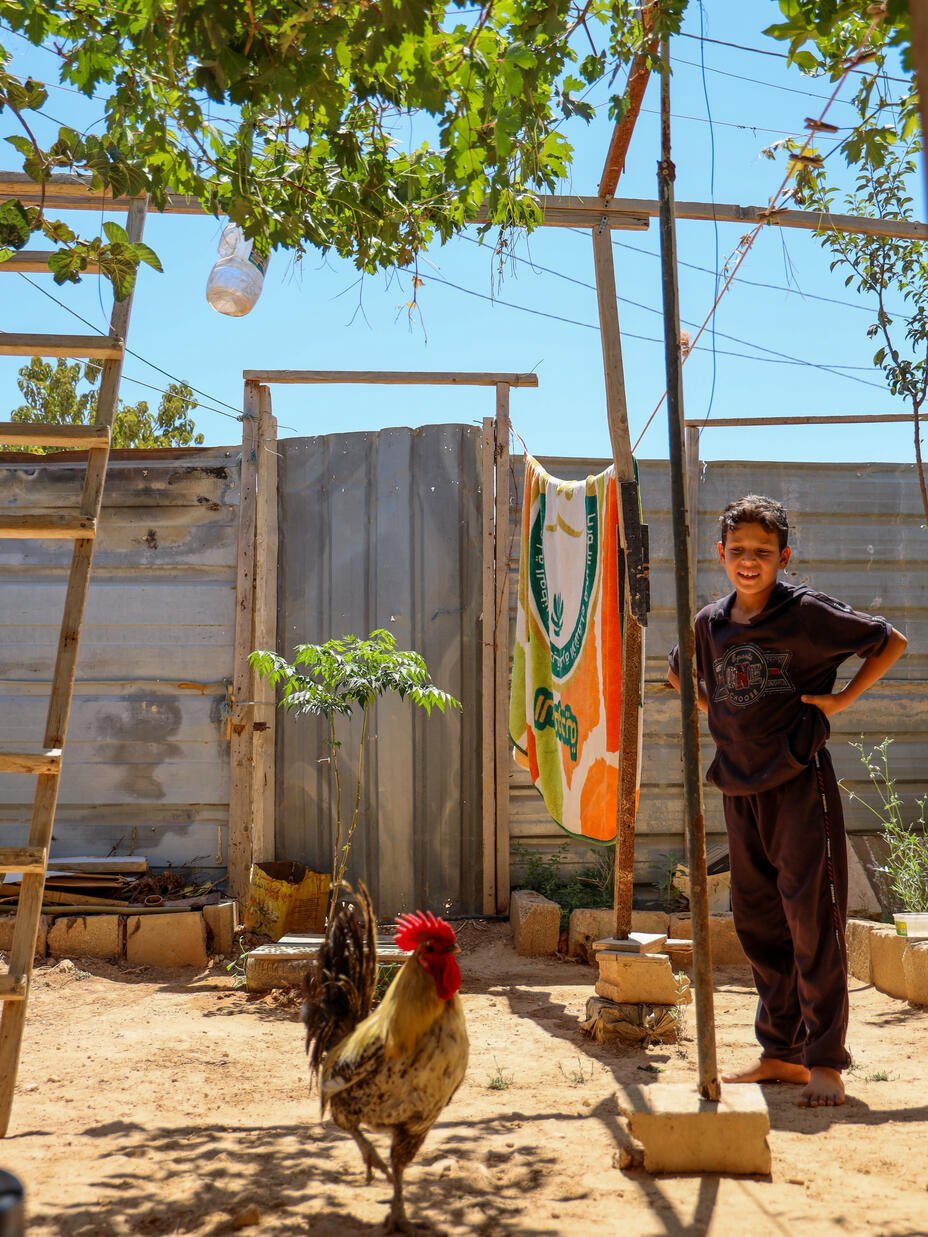 Nawras's family have lived on the same block since they arrived in Zaatari. His pet, White Rooster, likes to strut around their yard.
Photo: Ahmad Al-Jarery for the IRC

Today they live in a caravan, a sturdy container home set on a small plot of land shaded by grapevines. Nawras likes to show visitors the tiny garden his father planted next to the house and introduce them to his pet rooster, White Rooster, who roams the yard.

"I take care of White Rooster, I'm his only friend, and he won't let anybody touch him but me,” Nawras says. “I raised him, I give him food and play with him."

I take care of White Rooster, I'm his only friend...

Nawras also looks forward to seeing his friends at school when it starts again in September. “I will be in the fifth grade next year,” he says. “I like math the most, and I want to become a teacher."

However, Adham and Samar are concerned about the quality of the education Nawras and his siblings are receiving in the camp’s schools, so they signed them up for extra coursework offered by the local Makani Center, which is part of a UNICEF-supported program in Jordan.

"My children have benefited from the remedial courses more than school,” Adham says. “Nawras has been going to remedial classes for four years now."

Education is not Nawras’s parents’ only concern. Although the family’s health care is provided for free by the International Rescue Committee (IRC), one of the humanitarian organizations working in Zaatari, Samar and Adham are finding it hard to access other necessities. "Here in the camp, people don't have enough money to buy what their children need," Adham says.

The United Nations refugee agency (UNHCR) adds credit to the family’s prepaid Visa card each month, but amid a growing global economic crisis those funds no longer go very far. “This money used to be enough, but for a year now, it's not enough to buy half what we were able to buy before,” Adham says. “The prices have tripled." 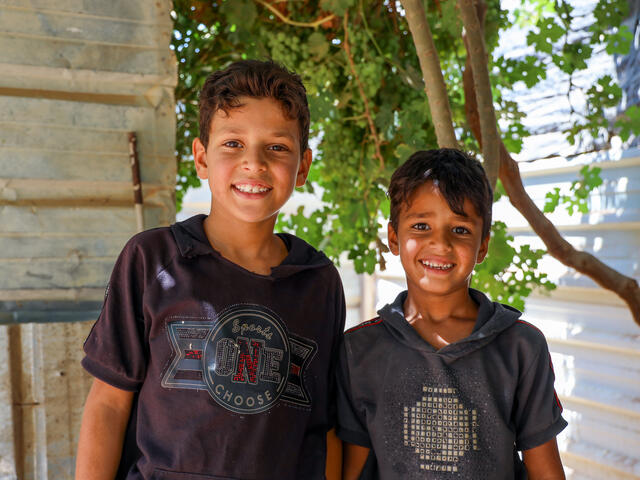 Nawras with his younger brother Joud: "Here in the camp, people don't have enough money to buy what their children need," says their father, Adham.
Photo: Ahmad Al-Jarery for the IRC

The cards can only be used in certain local stores on certain items, so families like Adham’s must sell approved items they’ve purchased with their cards to buy clothes for their children.

Like other parents in Zaatari, Adham and Samar are doing their best to make life easier for their children amid the hardships of a refugee camp. Looking to add to the family’s income, Adham has taken courses offered by another nonprofit in the camp to learn how to fix appliances and start a business. “I’m now thinking of opening a repair shop in Zaatari for home appliances,” he says.

Dreams for the future

Even as he continues to rebuild his life in the camp, Adham’s ultimate goal is to return home. “My family would love to move back to Syria one day,” he says, “but it is not safe there.”

Instead, he says he now dreams of going to a third country where his three children can have a better education and future—but resettlement is an opportunity offered to just a fraction of a percent of the world’s refugees. 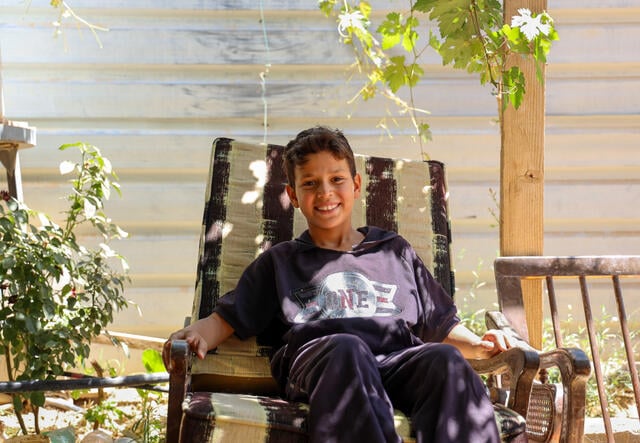 Nawras looks forward to seeing his friends at school when it starts again in September. “I will be in the fifth grade next year,” he says. “I like math the most, and I want to become a teacher."
Photo: Ahmad Al-Jarery for the IRC

With no end in sight to the conflict inside Syria, and opportunities for refugees outside of the camp extremely limited, many Syrians are likely to remain in Zaatari for years to come.

For now, Nawras’s family keep in touch by phone with relatives back home, and recently Nawras had a chance to meet his maternal grandmother for the very first time when she visited them in the camp.

"I was very excited to see her,” he says. "She stayed with us for three days. We had so much fun.

“She told me about my aunts. I would love to see Damascus."

IRC teams and partners currently reach over 1.2 million people inside Syria and in neighboring countries—Jordan, Iraq and Lebanon—with lifesaving support. We also assist Syrian refugees who are rebuilding their lives in the United States and Europe.

An IRC clinic in Zaatari: The IRC has been providing free-of-charge primary health care to thousands of Syrians living in the camp.
Photo: Timea Fauszt for the IRC

Since 2016, the IRC has been providing free-of-charge primary health care—including vaccinations, medications, reproductive health services, and health education programs—to thousands of Syrians living in Zaatari refugee camp. Our primary health clinic in Zaatari was selected by Jordan’s health ministry as a COVID-19 vaccination site in 2021 and since then has provided nearly 30,000 doses of vaccine.

​Refugee families around the world are fighting every day to survive, recover and rebuild their lives. Support the IRC's work.