President Trump has signed an executive order that would slash refugee admissions by more than half, halt all resettlement, indefinitely ban Syrian refugees, and favor religious minorities. These changes fly in the face of our country’s best values of freedom, fairness and compassion.

Depriving families of safety based on their religion or country of origin is irresponsible, immoral and un-American. It puts innocent lives at risk and does not make us safer. 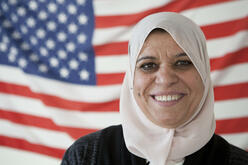 Bushra Naji, a refugee from Iraq who was resettled by the IRC, became a naturalized U.S. citizen on Sept. 10, 2013 in a ceremony in New York.
Photo: Donna Alberico/IRC

With more people than ever before displaced worldwide by violence, it’s critical that we urge our elected leaders to oppose these measures.

With a proud tradition of welcome, America has long been a beacon of hope for the persecuted. We must show our elected officials that we believe in a country that stands for freedom and stands up to fear.

Call your members of Congress.

Write to your members of Congress.

What you need to know about refugees in America