Tell your elected officials, “I stand with refugees” 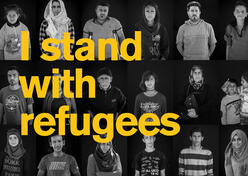 The United States has long been a beacon of hope for refugees fleeing war and persecution. Until now.

On January 27 the Trump Administration halted the U.S. refugee resettlement program, and blocked Syrian refugees indefinitely. Americans are speaking out in opposition to this inhumane ban, letting their elected officials know through calls, emails and social media that they support refugees.

Writing a letter is one of the best ways to let your representatives know where you stand.

Print and fill out this postcard with your own personal reasons for supporting refugees (these have the biggest impact!) and mail it to your elected officials. Here's where to find their addresses:

Share this postcard with your friends, family, local groups and faith communities and ask them to contact their representatives. You can even host a letter-writing party.

I support refugees, no matter where they're from. Join me and @theIRC: Send Congress a postcard