Women’s rights activists in Uganda have joined together to become powerful forces for change in their communities. Whether it’s ensuring girls have access to school and aren’t forced to marry, preventing domestic violence or getting women into work, they’re determined to build a better world where all women have the chance to thrive.

I’m a feminist, a strong one. 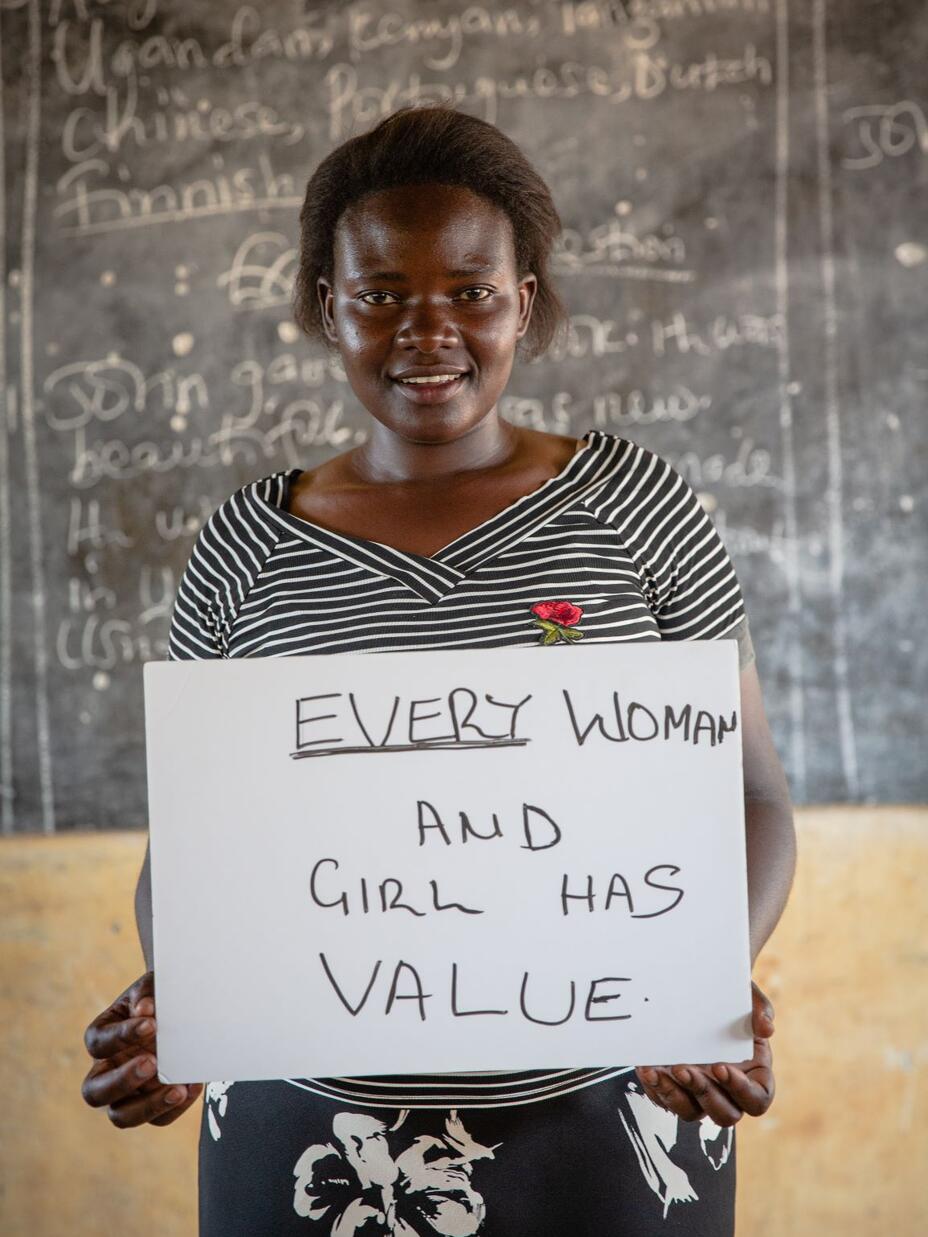 As a teacher, Jackie challenges sexism in her classroom. She cultivates a culture where girls know their value and are respected.
Photo: EstherMbabazi/IRC

Twenty-nine-year-old Jackie lives just around the corner from the school where she teaches in Yumbe district, northern Uganda.

“One of my responsibilities at the school is being a leader to girls,” she explains, while her children, Jovan, age three, and Jedidah, age seven, play quietly next to her. “It is so important for both boys and girls to have education. Education is a key to their success.” 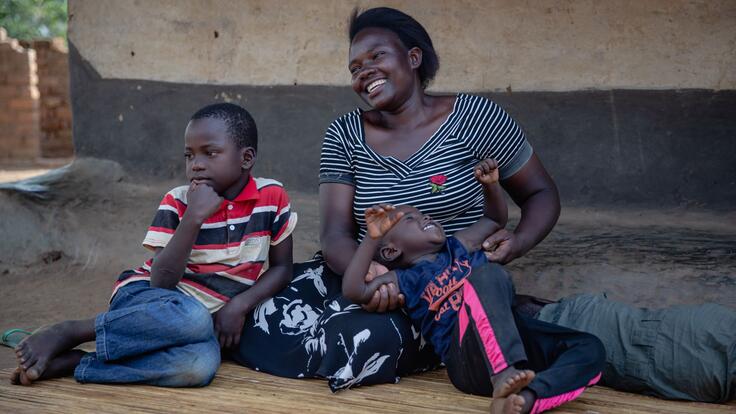 Jackie lives with her children around the corner from the school where she works and is “a leader to girls.”
Photo: EstherMbabazi/IRC

Jackie has been fighting for girls’ rights in the classroom her entire life. “When I was first told I was an activist, I was surprised, then I was really happy that I was doing something someone is recognising.”

Two years ago, she joined Logoa Women, a Ugandan women’s activism group, to take her campaigning to the next level. The IRC is partnering with Logoa and other activist groups in Uganda to work towards their goals on gender equality.

We deliver training on topics like sexual harassment and how women can report abuse, while providing direct support to women and girls affected by violence.

Jackie performs plays in the community that help to raise awareness about the issues facing women and girls. 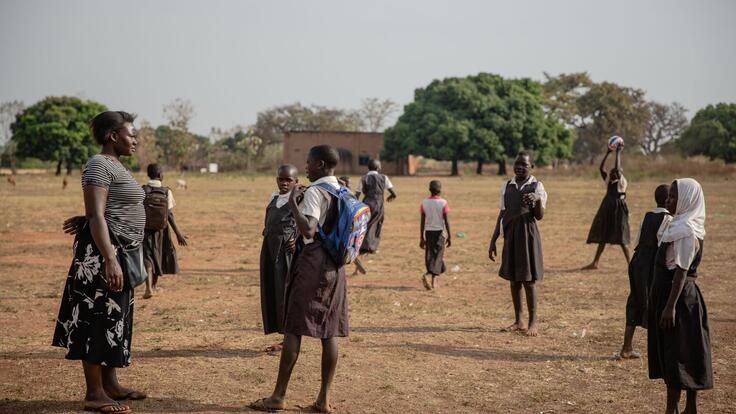 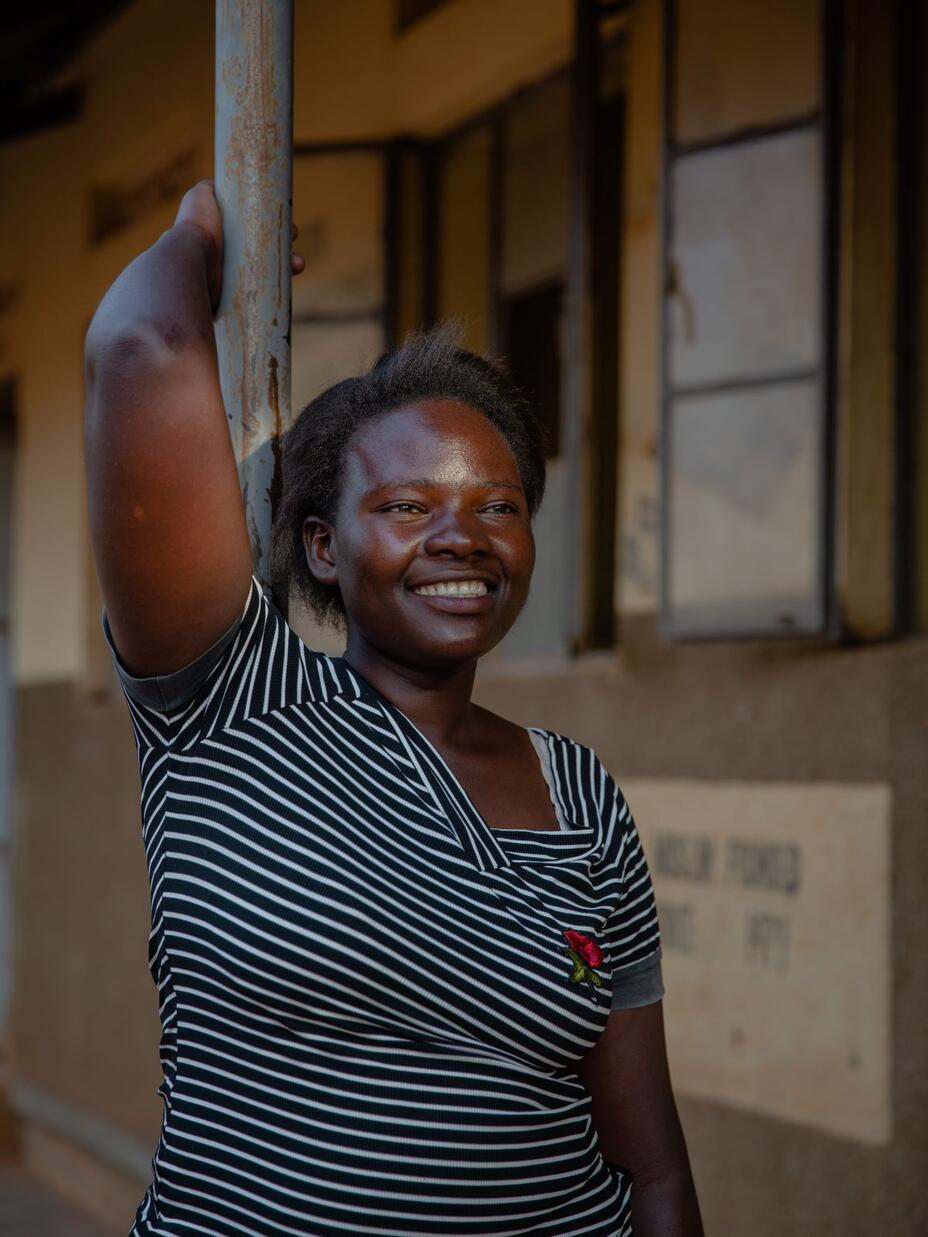 “We, as human beings, are just like money: When we scramble it and throw it down, it still has value. When you pick it up and stretch it out, you can still take it to the market and buy something. So a human is just like that, if any obstacle comes and squeezes you, you still have that value in you somewhere, somehow.”

We can all stand together and do something where the world can recognize that women also exist. 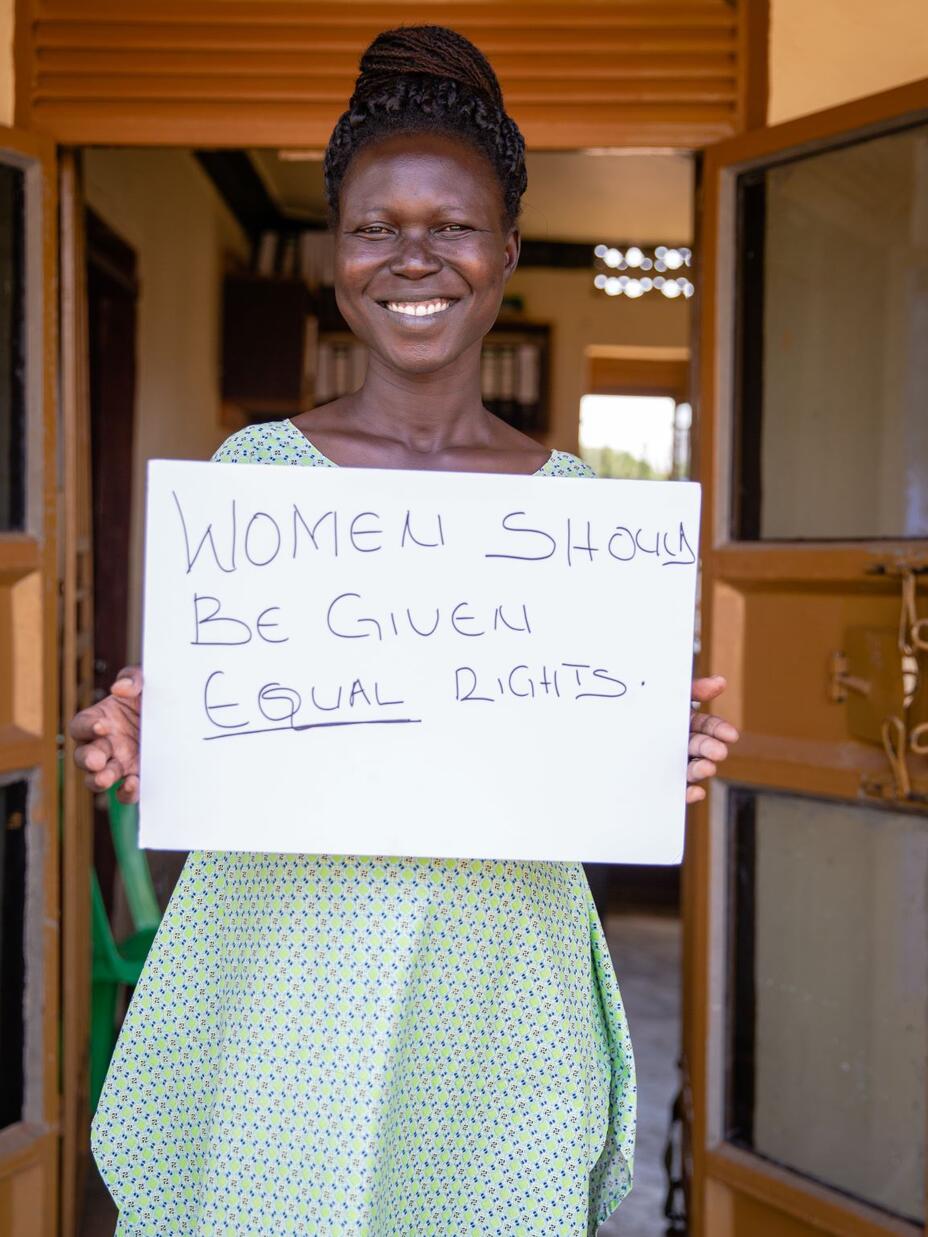 Grace Muuduru works for COSMESS, a women’s rights group in northern Uganda, where she helps both refugee and Ugandan women.
Photo: EstherMbabazi/IRC

Twenty-seven-year-old Grace has been standing up for women since she was at school. She remembers confronting boys bullying her friend and telling them: ‘One day this girl could be President!’

Today, she works for COSMESS, a women’s rights group in northern Uganda that helps both refugees and Ugandan women. Uganda currently hosts over 800,000 South Sudanese refugees who have escaped a brutal conflict that’s been waging since 2013.

The group offers training to enable women to enter professions like carpentry and auto-mechanics. 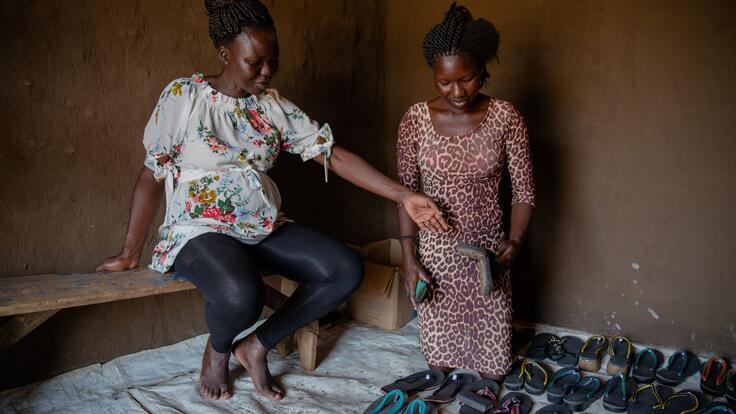 Grace works with refugees like 19-year-old Vivian to help them start their own businesses. Vivian opened her own shop selling crafts and shoes.
Photo: EstherMbabazi/IRC

“At high school, they say that instead of doing sciences, ladies do arts. People feel that women are not capable of some things. So we always say, we’re equal, girls can do the same as men can. If they’re given the opportunity, women are really the best.”

COSMESS also runs awareness-raising sessions about sexual harassment. “It’s a really common thing in our communities,” Grace explains.  “And you find these women, at times, they don't know that they're being sexually harassed. We tell them the forms of sexual harassment and we have some people in the communities where they can report if something happened to them.” 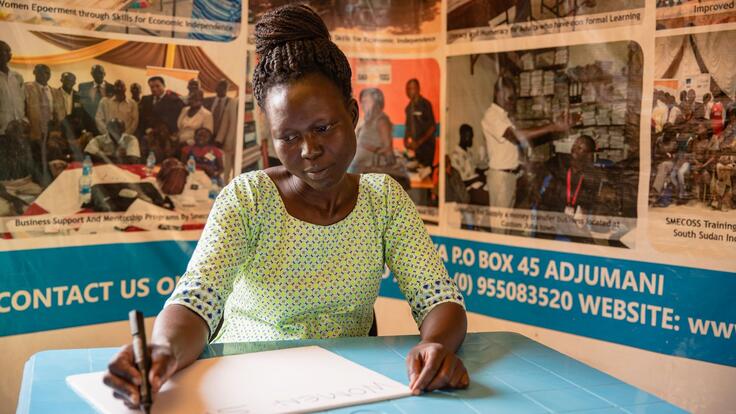 Grace writes her message to the world in the COSMESS office. She’s committed to ensuring that women can live free from sexual harassment and abuse.
Photo: EstherMbabazi/IRC

Her work has not come without criticism. “People oppose us a lot. Somebody may come and say ‘who are you? These are things we started [a] long time [ago]. Do you think you can change the culture?' At times you feel down, but you say no, you have to really stand [up] for your rights. 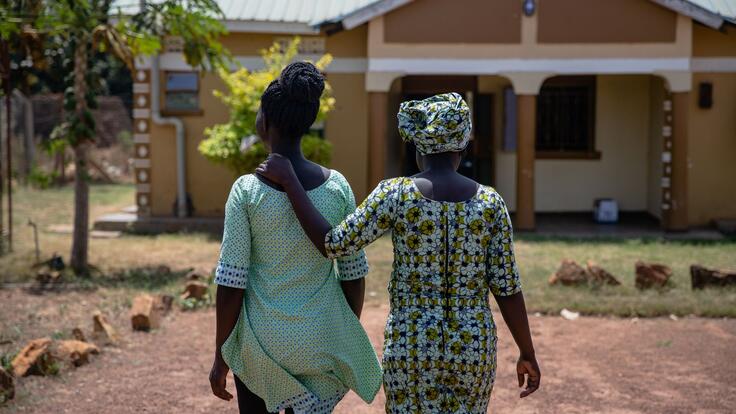 Grace, and her colleague Fatuma Jamila, have been supported by the IRC’s Listen Up program, which aims to amplify the voices of women and girls.
Photo: EstherMbabazi/IRC

“I became an activist because women are really violated. People don’t get to hear their voices. I felt that I should really support them if I can, stand up for them—we can stand all together and do something where the world can recognise that women also exist.”

In years to come, I want women also to be leaders. Women should be given that right to lead. What men can do, women can do too. 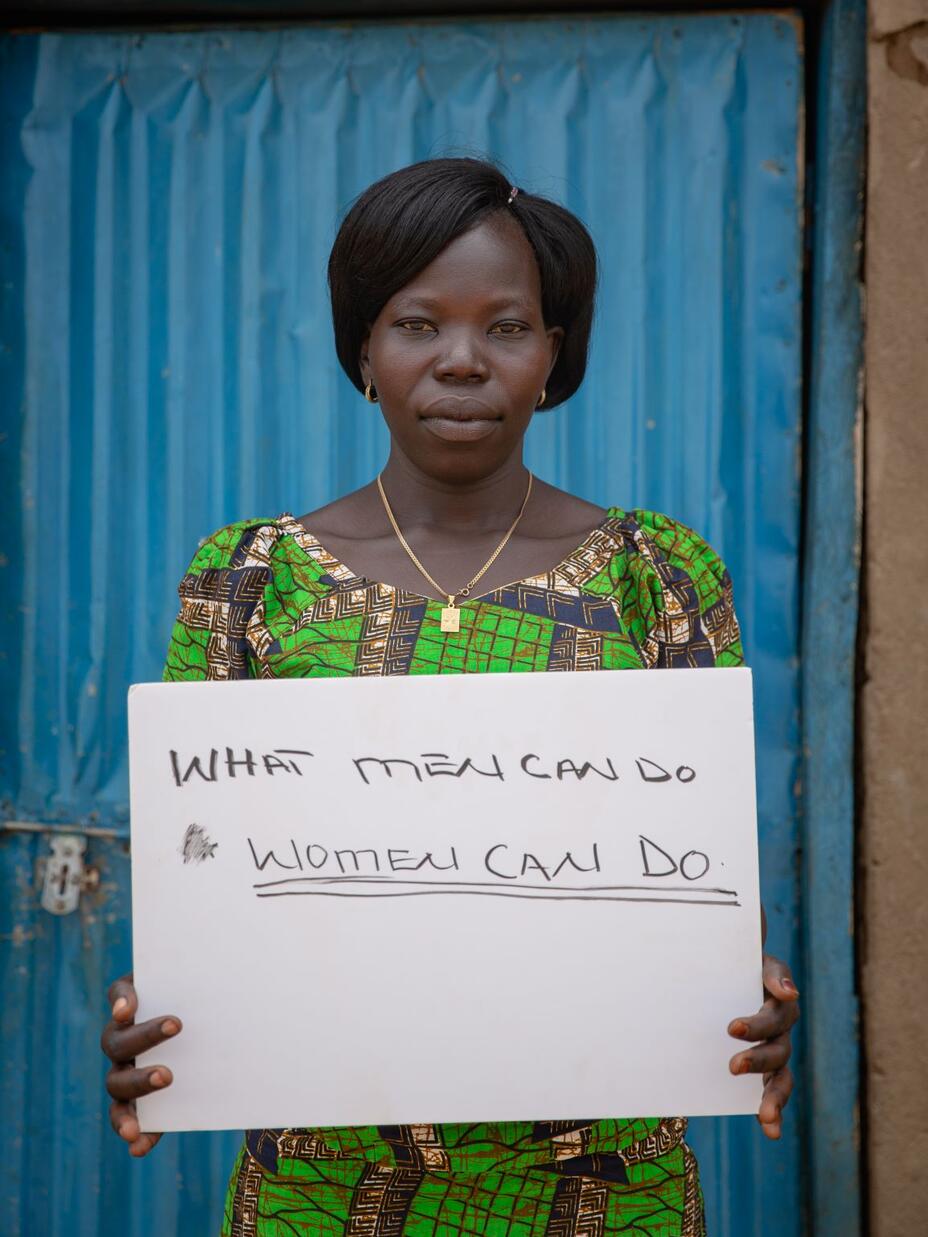 “In years to come, I want women also to be leaders. Women should be given that right to lead. What men can do, women can do too.”
Photo: EstherMbabazi/IRC

Thirty-year-old Foni Grace fled war in South Sudan and came to Uganda in 2016, taking her two daughters with her to live in Bidi Bidi, the second-largest refugee camp in the world. “In South Sudan, children cannot access school, there’s no proper education, children are killed, women are also killed.” 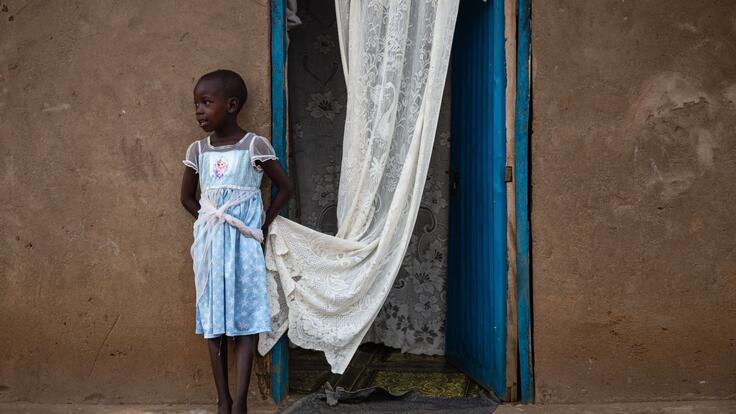 Today, she’s part of Togoleta, a refugee women’s activist group that provides counselling to refugees in the camp to prevent violence and help women and girls recover from abuse. Evidence shows that when crisis and instability strikes, violence against women and girls spikes, so it is vital that activities to prevent violence and support surviors are provided in settings like Bidi Bidi. 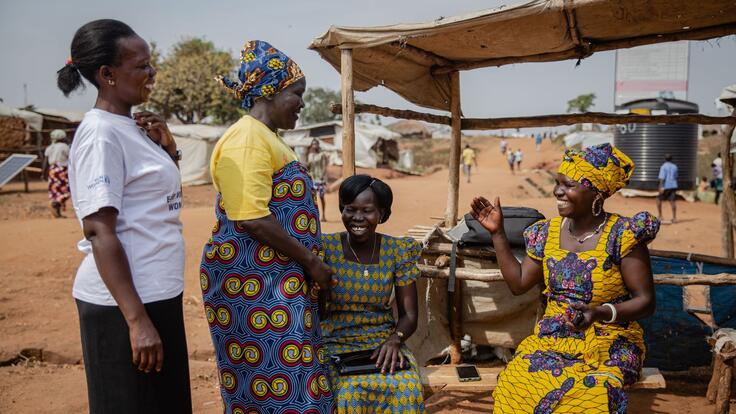 Foni Grace is part of Togoleta, a refugee women’s activism group that work together to provide counselling to women affected by violence in the camp.
Photo: EstherMbabazi/IRC

“My work for women will be permanent, even if I’m in South Sudan, even when I go back, I feel I have to continue with my work in activism. In years to come, I want women also to be leaders. Women should be given that right to lead. What [a] man can do, a woman can do too.”

We call women together to get out of their situations, so they leave their problems behind.

Fifty-four-year-old Jemimah, who is also from South Sudan, is the founder of Togoleta. Building up her grass-roots women’s movement in Bidi Bidi has been a huge part of her life since she found safety in Uganda.

“We will go there with a heart of love,” Jemimah says before she begins a counselling session. Foni Grace and her other fellow activists nod in agreement. “We have to sit with [the women] and hear from them what they want to say, then we shall tell them how they can continue to stay strong.” 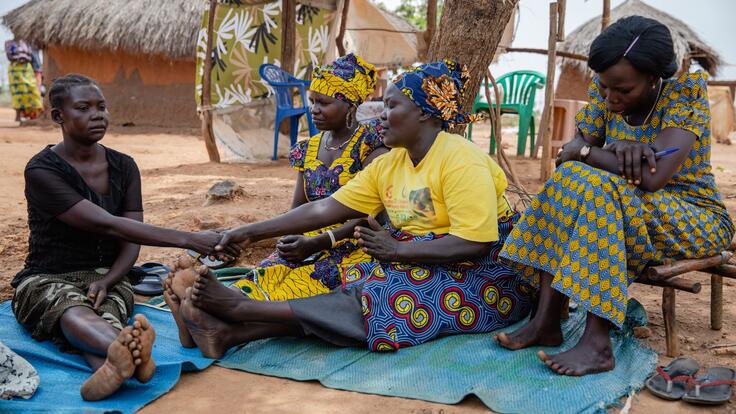 Jemimah and the other Togoleta members sit and counsel Cecilia, a fellow refugee woman in the camp who was facing difficulty. “We make women strong.” Jemimah says.
Photo: EstherMbabazi/IRC

“The IRC has trained us to take care of girls forced to marry, especially those who get pregnant. After giving birth, they have to go back to school. We have to take care of these girls.” 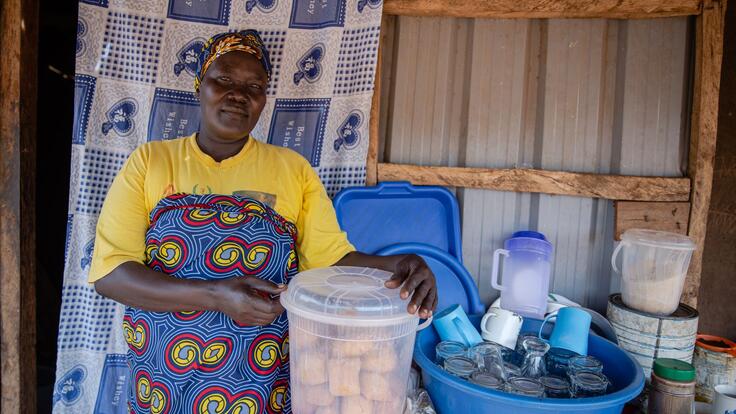 In addition to being a full-time activist, Jemimah has her own busines selling cakes to the community in the camp.
Photo: EstherMbabazi/IRC

Among many other accomplishments, Togoleta has supported a woman who was suicidal and saved her life. “Togoleta makes women strong: We call women together to get [them] out of their situations, so they leave their problems behind,” Jemimah explains. 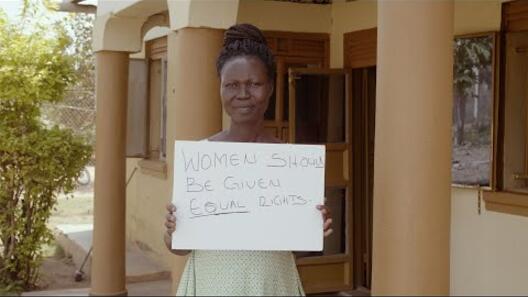 The activists who shared their stories are part of the IRC’s Listen Up program, which aims to amplify the voices and power of refugee women and girls. The program is grounded in the understanding that women and girls are forceful agents of change who can improve the entire humanitarian system and catalyze institutional reform—if we listen to them.

The Listen Up team in Uganda works with activist groups in Bidi Bidi and Yumbe, providing training, funding and support so they can better advocate for the prevention of sexual harassment, exploitation and abuse. The team consults with refugees and the host community to strengthen reporting of cases of violence.

Listen Up is funded by the Department of State, Bureau of Population, Refugees and Migration and is a Gift of the United States Government.