The Mt. Nyiragongo volcano is one of the most active in the world. It overlooks Goma, a city in eastern Democratic Republic of Congo that is home to 2 million people.

The volcano last erupted on May 22, leaving at least 32 people dead and pushing tens of thousands to flee to neighboring Rwanda and other parts of Congo as lava flowed toward the city. More than 500 children are still missing after being separated from their families in the rush and confusion.

Over the past week, Nyiragongo’s crater has quickly refilled with lava, and hundreds of tremors have shaken the region. These and other warning signs that another eruption may be imminent prompted local authorities to order a partial evacuation of Goma on May 27.

The eruption destroyed some 3,000 homes, and the earthquakes that followed it have caused cracks in roads and buildings. Many people who remain in Goma are sleeping outside for fear their damaged houses will collapse.

Researchers observing Mt. Nyiragongo have a limited sense of the current risk level and cannot rule out the possibility of a new eruption in the next few days. And the volcano itself is not the only source of danger: There is a high risk of a limnic, or gas, eruption from nearby Lake Kivu, which could suffocate people living on its shores with a release of carbon dioxide.

Congolese authorities say last week’s eruption recalls Nyiragongo’s devastating 2002 eruption, which killed more than 250 people and left 120,000 homeless. As in the wake of that disaster, people will need shelter, water and sanitation, economic support, protection for women and children, and counseling and other psychosocial support. 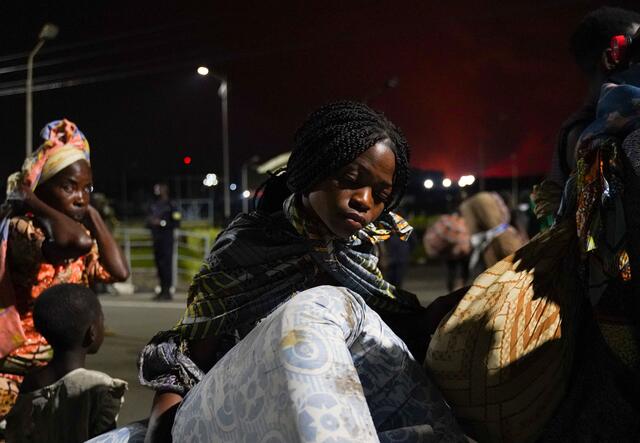 People carry their belongings as they flee from Goma, Democratic Republic of Congo, after the May 22 eruption of Mt. Nyiragongo.
Photo: SIMON WOHLFAHRT/AFP via Getty Images

“The memory of the 2002 eruption is still raw, and Saturday’s eruption has led to mass displacement,” says Borry Jata, IRC country director for the Democratic Republic of Congo. "The IRC is concerned about the continued risks in Goma as earthquakes persist, destroying buildings, homes and other infrastructure—and gas emissions, acidic rain and volcanic dust pose continued health risks."

The IRC is monitoring the situation and assessing the growing needs in eastern Congo, with a particular focus on child protection, emergency cash needs, and water and sanitation. We are preparing our response to the eruption of Mt. Nyiragongo in collaboration with government officials in Congo and other humanitarian organizations, and calling for an urgently needed increase in aid funding.

The IRC in the Democratic Republic of Congo

The IRC has been working in the Democratic Republic of Congo since 1996. As the country faces a challenging recovery from decades of conflict and widespread disease, we are providing emergency health care, shelter, water, sanitation services and emergency supplies to hundreds of thousands of people in eastern and central Congo.