Why is there a Refugee Olympic Team?

The Refugee Olympic Team will be returning to the Games, held this summer in Tokyo, Japan, between July 23 and August 8, 2021.

This is the second time the refugee team will be competing. The first time was at the Summer Olympic Games in Rio de Janeiro, Brazil, in 2016. The team has almost tripled in size since 2016, from 10 to 29 members, and comprises athletes from 11 countries living and training in 13 host countries. This is also the first year that there is a Refugee Paralympic Team.

Why is there a Refugee Olympic Team?

In 2015, 65 million people had been displaced from their homes as a result of conflict or natural disaster. In that year, more than one million refugees entered Europe after fleeing wars in the Middle East, Africa and Central Asia.

That summer, the International Olympic Committee (IOC), the guardian of the Olympic Games, established a Refugee Emergency Fund: $1.9 million was donated to help international aid agencies integrate refugees in sport. In the same year, the IOC announced it would be inviting refugee athletes to compete in the Olympic Games in Rio de Janeiro.

The creation of the refugee team sent a message of hope and inclusion to millions of refugees around the world. The 10 athletes who competed in Rio de Janeiro came from Syria, South Sudan, the Democratic Republic of Congo and Ethiopia.

Following the success of the 2016 team, the IOC decided to enter an IOC refugee team in the 2020 Tokyo games (postponed one year due to COVID-19).

Who is competing on the Refugee Olympic Team? Where are they from?

The athletes are selected from refugees supported by the IOC through the Olympic Scholarships for Refugee Athletes program.

The 29 athletes come from Syria, the Democratic Republic of Congo, South Sudan, Eritrea, Venezuela, Iran, Afghanistan, and Cameroon. Many of these countries are in the midst of conflict or civil wars, making it too dangerous for the Olympians to return.

Weightlifter Cyrille Tchatche II arrived in the United Kingdom at age 19 to compete for Cameroon at the 2014 Commonwealth Games. Realizing it wasn't safe to return to his home country, he slipped away from his team's lodgings. He slept on the streets, becoming increasingly isolated and depressed. Eventually he called a suicide hotline, and police arrived to pick him up.

Cyrille applied for asylum while in custody (it took nearly two years to get his refugee status), was offered a home, found treatment for depression—and started weightlifting again. It wasn't long before he was winning national championships. He also went back to school: Now the Olympian is a mental health nurse who has been supporting patients through the pandemic. "I will be honored to represent not only refugees but all the estimated 80 million displaced people around the world," he told Middlesex University.

Refugee @Olympics Weightlifter @Iicyrille has been working as a nurse for the @NHS throughout the pandemic alongside his training for #Tokyo2020!

Join us in cheering on the #Refugee Olympic Team this year. Good luck Cyrille! https://t.co/xcQMXpQpdM

The year before she competed in the Rio Games, winning her heat in the 100m butterfly, Syrian swimmer Yusra Mardini had to swim for her life. She and her sister kept themselves afloat for three hours while pushing their foundering boat—which carried other refugees trying to reach Europe—to the safety of a Greek beach. This summer she’ll be competing in the Olympics for the second time with the Refugee Olympic Team.

Now 22 and living in Germany, Yusra is ready for Tokyo 2020. "My dream is for the world to be at peace and there will be no more refugees anymore,” she told Eurosport. “That those wars will end and that we are all equal in the world and live peacefully and in harmony. I know it's hard but this is my dream."

Escaping violent conflict in South Sudan with her aunt at just 8 years old, Anjelina resettled in Kenya’s Kakuma refugee camp, one of the largest refugee settlements in the world. She hasn't seen her parents, who are still in Sudan, since she fled. It's the hope of reuniting with her family that motivates her. "If I go far and [have] success, then my dream is just to help my parents."

Karate star Hamoon Derafshipour won bronze in the 2018 World Championships while representing his homeland Iran. But a year later he and his wife Samira Malekipour left for Canada so that Samira—the former coach of Iran’s women’s karate team—could train him ahead of the Tokyo 2020 Games.

"I wanted my wife to be my coach, which was not possible back home due to the existing rules," Hamoon told The Record*. Hamoon says Samira is the key to his success, and the two have big goals for the Tokyo games. "We want to go to the Olympics for results, for a medal." 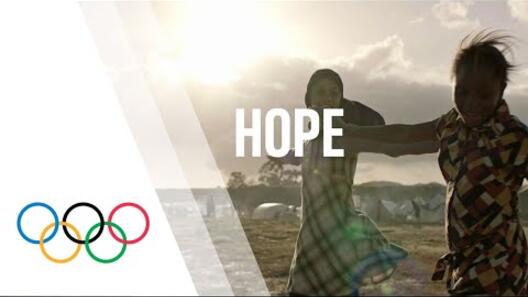 Aram Mahmoud, from Syria, now living in the Netherlands  –  Badminton

Muna Dahouk, from Syria, now living in the Netherlands – Judo

Popole Misenga, from the Democratic Republic of Congo, now living in Brazil – Judo

Sanda Aldass, from Syria, now living in the Netherlands – Judo

Read about all the Refugee Olympic Team athletes in detail.

Why is the Refugee Olympic Team important?

With over 82 million displaced people worldwide, we are living in the worst refugee crisis since the Second World War. The Refugee Olympic Team sends a powerful message of solidarity and hope. The team showcases the incredible talent of already extraordinary people who have been through so much.

Join us as we cheer on the refugee team at the Olympics this year.