The arrival of unaccompanied minors from Central America to the U.S. border 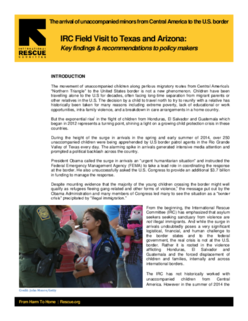 Report: The arrival of unaccompanied minors from Central America to the U.S. border

The movement of unaccompanied children along perilous migratory routes from Central America’s “Northern Triangle” to the United States border is not a new phenomenon. Children have been travelling alone to the U.S for decades, often facing long-time separation from migrant parents or other relatives in the U.S. The decision by a child to travel north to try to reunify with a relative has historically been taken for many reasons including extreme poverty, lack of educational or work opportunities, intra-family violence, and a breakdown in care arrangements in a home country.

But the exponential risei in the flight of children from Honduras, El Salvador and Guatemala which began in 2012 represents a turning point, shining a light on a growing child protection crisis in these countries.

During the height of the surge in arrivals in the spring and early summer of 2014, over 250 unaccompanied children were being apprehended by U.S border patrol agents in the Rio Grande Valley of Texas every day. The alarming spike in arrivals generated intensive media attention and prompted a political backlash across the country.

President Obama called the surge in arrivals an “urgent humanitarian situation” and instructed the Federal Emergency Management Agency (FEMA) to take a lead role in coordinating the response at the border. He also unsuccessfully asked the U.S. Congress to provide an additional $3.7 billion in funding to manage the response.

Despite mounting evidence that the majority of the young children crossing the border might well qualify as refugees fleeing gang-related and other forms of violence,ii the message put out by the Obama Administration and many members of Congress led many to see the situation as a “border crisis” precipitated by “illegal immigration.”

From the beginning, the International Rescue Committee (IRC) has emphasized that asylum seekers seeking sanctuary from violence are not illegal immigrants. And while the surge in arrivals undoubtedly poses a very significant logistical, financial, and human challenge to the border states and to the federal government, the real crisis is not at the U.S. border. Rather it is rooted in the violence afflicting Honduras, El Salvador and Guatemala and the forced displacement of children and families, internally and across international borders.

The IRC has not historically worked with unaccompanied children from Central America. However in the summer of 2014 the IRC began to explore how it might tap its global child protection expertise and its experience resettling refugees in 21 cities across the U.S.iii to help Central American children fleeing violence.

The IRC began by engaging with Executive Branch officials and Congressional staffers to discuss the evolving situation. To inform these conversations with policy makers, an IRC researcher visited Texas and Arizona to conduct an on-the-ground field assessment. The purpose of the assessment was to better understand the root causes of the flight of so many children to the U.S., their needs, and the problems that have hampered the U.S. government’s response.

This report provides a summary of the findings and recommendations that arose out of the field assessment which are aimed to help policy makers improve the current and future response to the arrival of unaccompanied children from Central America.