Bipartisan Support for Welcome Lives On: From Afghanistan to Arizona 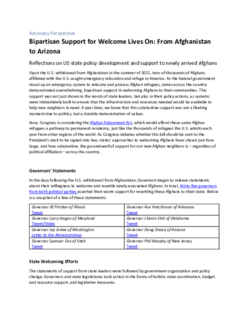 Report: Bipartisan Support for Welcome Lives On: From Afghanistan to Arizona

Upon the U.S. withdrawal from Afghanistan in the summer of 2021, tens of thousands of Afghans affiliated with the U.S. sought emergency relocation and refuge in America. As the federal government stood up an emergency system to relocate and process Afghan refugees, states across the country demonstrated overwhelming, bipartisan support in welcoming Afghans to their communities. A year later, we know that this substantive support was not a fleeting moment due to politics, but a durable demonstration of values. Now, Congress is considering the Afghan Adjustment Act, which would afford these same Afghan refugees a pathway to permanent residency, just like the thousands of refugees the U.S. admits each year from other regions of the world. As Congress debates whether this bill should be sent to the President’s desk to be signed into law, states’ approaches to welcoming Afghans have shown just how large, and how substantive, the groundswell of support for our new Afghan neighbors is – regardless of political affiliation – across the country.