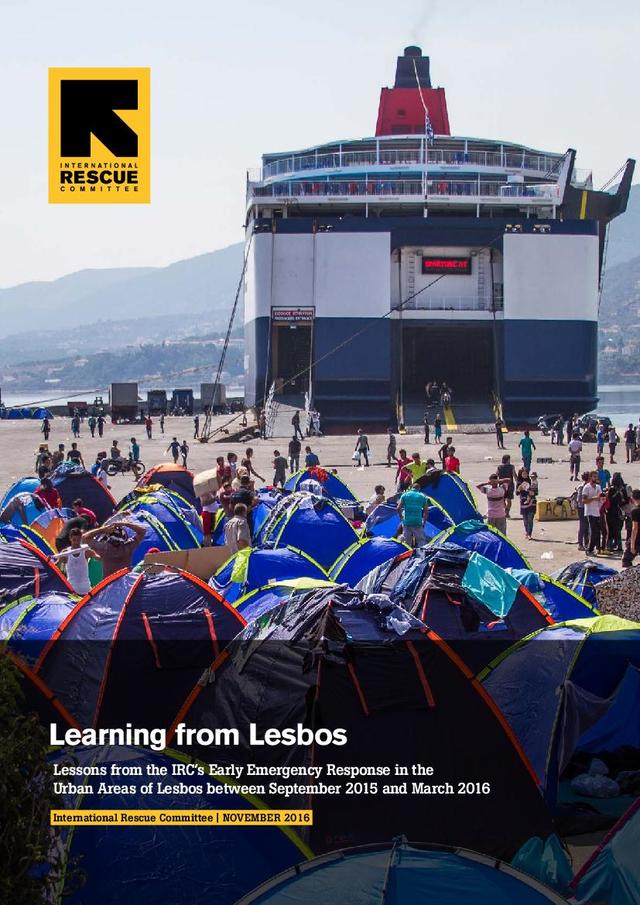 Report: Learning from Lesbos: Lessons from the IRC's emergency response in the urban areas of Lesbos

As the European refugee crisis highlights, displaced people are increasingly travelling to or through towns and cities, rather than being accommodated in centralised camp settings. Today, more than half of the world’s displaced people live in urban areas and will, on average, continue to be displaced for over a decade.

The humanitarian sector must adapt to meet the challenges of an urbanising world and the increasing role of cities as places of refuge, as well as sites of heightened risk of crisis, marginalisation, and inequality. It is therefore critical that humanitarian actors take a coordinated and collaborative approach to supporting refugees and migrants, tailoring their response to suit the urban context and its various stakeholders.

Urban areas are characterised by the size, diversity and mobility of their populations, the density and diversity of the built environment, the number and diversity of government, civil society, private sector and academic organisations, and the reliance of urban populations on social, political, technical and economic systems rather than the natural environment for their livelihoods. These characteristics create both opportunities and challenges for actors responding to urban crises. In particular, they create an imperative for the humanitarian sector to adapt to the complexity of urban environments, the diversity of their populations, and the large variety of stakeholders present within them.

The arrival of large numbers of people in an urban area brings challenges for both displaced and host populations. It also presents opportunities. Currently, however, both the challenges and opportunities are not adequately recognised or addressed in humanitarian response. The emergency response to an unexpected influx of asylum seekers and other migrants in a town or city sees “traditional” humanitarian actors sharing the field of operations with a broader range of stakeholders than they are used to cooperating and coordinating with. Additionally, this is an environment in which local and/or national actors will often have an existing operational presence and where local authorities will expect to continue to exercise (and have respected) their mandate for oversight of the activities taking place in their constituencies.

This report underlines the importance of a coordinated and collaborative approach to emergency response in urban areas. The recommendations, addressed primarily to humanitarian actors, reflect lessons learned from the International Rescue Committee’s (IRC) initial emergency response programming on the island of Lesbos, Greece, between September 2015 and March 2016, while the crisis on Lesbos was at its peak. This report is not a reflection of the IRC’s current programming on the island. The findings recognise the complexity of urban areas and the need for greater coordination of response activities and better collaboration among responders, stakeholders, and local communities.

This report also contributes to the continuing discussion around how to improve urban humanitarian response. The findings and recommendations are intended to build on the growing knowledge base around good practice. It is not an evaluation, but rather a product to inform and influence operational practices and policies in ongoing and future responses to humanitarian crises in urban settings.

The findings and recommendations in this report look for ways to overcome the challenges and leverage the opportunities arising from humanitarian operations in urban areas, bringing benefits for both displaced populations and the communities in which they reside. The main findings, in summary, are: