Mortality in the Democratic Republic of Congo: An ongoing crisis 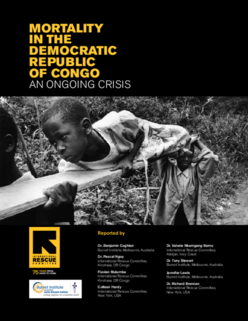 Report: Mortality in the Democratic Republic of Congo: An ongoing crisis

The Democratic Republic of Congo (DR Congo) has been mired in conflict for over a decade, with devastating effects on its civilian population. The most recent war of 1998–2002 was characterized by mass displacement, collapse of health systems and food shortages, all contributing to major elevations of mortality. Although a formal peace accord was signed in December 2002, the war has since given way to several smaller conflicts in the five eastern provinces that have continued to exact an enormous toll on the lives and livelihoods of local populations.

Since 2000, the International Rescue Committee (IRC) has documented the humanitarian impact of war and conflict in DR Congo through a series of five mortality surveys. The first four studies, conducted between 2000 and 2004, estimated that 3.9 million people had died since 1998, arguably making DR Congo the world’s deadliest crisis since World War II. Less than 10 percent of all deaths were due to violence, with most attributed to easily preventable and treatable conditions such as malaria, diarrhea, pneumonia and malnutrition.

Recent political developments together with improvements in security and humanitarian funding have raised hope that DR Congo could emerge from years of crisis. A number of international agencies have expressed optimism that such progress would yield an early humanitarian dividend. But DR Congo faces many challenges on its road to recovery and development.

This fifth and latest survey, covering the period from January 2006 to April 2007, aims to evaluate the current humanitarian situation in DR Congo by providing an update on mortality. Investigators used a three-stage cluster sampling technique to survey 14,000 households in 35 health zones across all 11 provinces, resulting in wider geographic coverage than any of the previous IRC surveys.

The key findings and conclusions are:

The IRC survey overlaps only partially with the period since December 2006, during which there has been an escalation of violence in North Kivu province, resulting in the displacement of more than 400,000 persons. Recent political and humanitarian gains are in jeopardy and further escalation of the conflict could potentially destabilize the region beyond DR Congo’s own borders. Steadfast international commitment to secure recent gains, prevent further deterioration and scale up assistance to other regions of the country is as necessary now in DR Congo as at any other recent period.