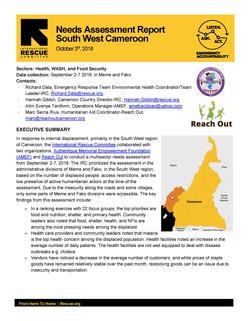 In response to internal displacement, primarily in the South West region of Cameroon, the International Rescue Committee collaborated with two organizations, Authentique Memorial Empowerment Foundation (AMEF) and Reach Out to conduct a multisector needs assessment from September 2-7, 2018. The IRC prioritized the assessment in the administrative divisions of Meme and Fako, in the South West region, based on the number of displaced people, access restrictions, and the low presence of active humanitarian actors at the time of the assessment. Due to the insecurity along the roads and some villages, only some parts of Meme and Fako divisions were accessible. The key findings from this assessment include: