New Responses to the Refugee Crisis: Promises and Challenges in Uganda A case study of World Bank financing for refugee-hosting nations 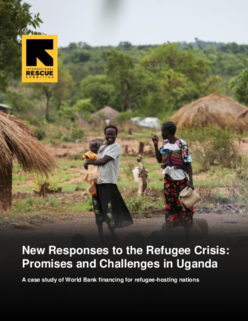 Report: New Responses to the Refugee Crisis: Promises and Challenges in Uganda A case study of World Bank financing for refugee-hosting nations

Uganda, in many ways, is ground zero for new global initiatives to address large-scale, protracted displacement. It has hosted refugees from neighboring countries for decades, and today hosts the largest refugee population in Africa.

At the 2016 Leaders’ Summit on Refugees and Migrants, Uganda doubled down on its progressive refugee policies, which allow refugees to work, go to school and access land. It opted to be the first country to pilot the Comprehensive Refugee Response Framework of the New York Declaration. And it is among the first countries to receive financing through a new sub-window of the World Bank’s 18th replenishment of its International Development Association (IDA18), created to provide additional concessional financing to low-income countries hosting large numbers of refugees. Together, these commitments, framework and financing offer immense potential to meaningfully improve the lives of refugees and Ugandan host communities.

All eyes are on Uganda as an early adopter of these new tools and funding. How will World Bank-funded projects be balanced with existing humanitarian interventions for refugees—which are extensive in Uganda? How will the Bank interact with the complex set of actors, including the government, UN Refugee Agency (UNHCR), non-governmental actors (NGOs), civil society, and refugees themselves? Will the Bank adapt its projects or move forward with business as usual in these unique contexts? Will the Bank’s initiatives encourage other donors to provide multiyear financing and support long-term solutions for refugees and host communities?

This case study starts to answer these questions by examining Uganda’s recent policy approaches and initiatives that respond to refugee and host populations. Although it is still early days, observations so far suggest mixed results. The Government’s willingness to engage with these new platforms and maintain its progressive refugee policies, especially in the face of global actors retreating from their share in the responsibility for responding to refugee crises, is impressive and important.

However, early concerns about implementation have been, in some instances, validated. While the World Bank’s financing and CRRF are “pulling in the same direction”, there are no formal agreed on outcomes and no formal linkages between the funding and the framework. The process for making decisions about policies and programs have seemingly marginalizes NGOs and refugees themselves, even though there are new structures meant to give them a voice. And most Bank-funded projects in the pipeline piggyback on existing Bank programs, bringing refugees into projects that were already in train; it is unclear to what extent these projects will adapt to reflect refugees’ experiences.

Based on these observations, this case study offers recommendations for the Government of Uganda, donors like the World Bank, UNHCR and other stakeholders. It calls on the Government to foster better coordination and collaboration between different levels of government and to lead on simplifying and aligning decision-making processes for the CRRF implementation and World Bank financing. It recommends the World Bank and UNHCR develop more deliberate consultative process to include a broader range of actors; help bring other development actors to the table; and to work with partners to identify a clear set of outcomes they want to achieve with the new financing and frameworks. It suggests NGOs more proactively engage with the World Bank to share their expertise and help shape program and policy decisions based on their years of working with refugees.