Pushing the boundaries: insights into the EU’s response to mixed migration on the Central Mediterranean Route 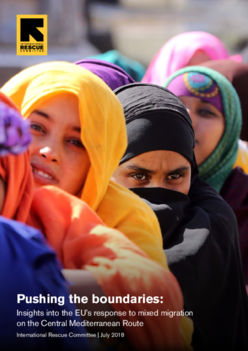 Report: Pushing the boundaries: insights into the EU’s response to mixed migration on the Central Mediterranean Route

Migration has been at the top of the European political agenda since 2015 following a spike in people, including refugees and asylum seekers, arriving to southern European countries by sea. Today, European Union (EU) leaders remain constrained by internal political divisions over how to manage arrivals to Europe. The resulting shortcomings in the European policy response have been seized upon by populist movements across Europe as evidence that migration is out of control, in turn fueling anti-immigrant sentiments.

However, the fact is that people have always, and will always, move across borders – pushed out by violence, persecution and conflict, by poverty, climate change or attracted elsewhere by work, study or family ties. The
migration that Europe is seeing is part of a much wider global pattern of population movements, including record levels of forced displacement, which are a fact of the modern world. Rather than trying to stop migration, leaders should seek to manage migration so that it is safe, orderly and humane.

In the absence of agreement on a fair and efficient system to share responsibility for arrivals inside Europe, an issue which came to the fore in the run-up to the June 2018 European Council meeting, leaders have found greater unity of purpose in their foreign policy approach. This has focused on two broad aims: on the one hand, the EU has sought to intensify cooperation with third countries with a view to curbing future arrivals to Europe, including through substantial investments in border security measures. On the other, it has focused on addressing the drivers of migration by fostering economic development, governance and building resilience in countries of origin and transit. Funding has been mobilised to address these two objectives through the EU Emergency Trust Fund for Africa (EUTF for Africa), launched at the Valletta Summit on Migration in 2015. High Representative of the European Union for Foreign Affairs and Security Policy, Federica Mogherini, said in a recent interview:

If you want to manage migration and if you want to prevent further security threats, in particular terrorism, there is one single place where you have to invest all your political, economic and diplomatic efforts and that is the
belt of the Sahel and the Horn of Africa. That is where all our challenges could be solved, or could deteriorate into something dangerous.”

The International Rescue Committee (IRC) works with vulnerable migrants in Niger, Libya and Italy, along what has become known as the Central Mediterranean Route (CMR), which stretches from Sub-Saharan Africa to Italy via Libya. Providing humanitarian assistance to people on the basis of need, the IRC works with all people on the move, including refugees, asylum seekers and economic migrants (all referred to in this report as ‘migrants’ unless otherwise specified), to provide emergency health care, cash support, information, and case management for particularly vulnerable people, including children and survivors of gender-based violence (GBV). People moving along this route do so for a range of reasons. Whatever first drove them to leave, they are all ultimately exposed to significant risks on the journey, including exploitation and abuse at the hands of people smugglers and security services. This report aims to draw greater attention to the humanitarian crisis facing people on the move along this route, and to offer insights into the impact of EU interventions on the situation they find themselves in.