(Un)welcome: the state of refugee resettlement in America 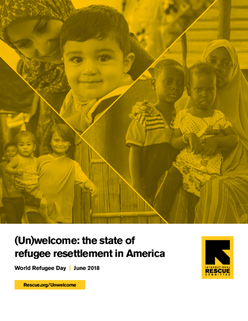 Report: (Un)welcome: the state of refugee resettlement in America

Refugee resettlement to the U.S. has been ground to a halt. Under the Administration, a series of policy changes will result in no more than 21,000 refugees being welcomed to the U.S. in Fiscal Year 2018. This will mark the lowest arrivals ever in the program’s history at a time when global needs have never been greater.

This International Rescue Committee (IRC) report includes an analysis of the current Administration’s refugee resettlement policy and its impact on businesses and local communities, and an IRC-commissioned poll, surveying those from the United States, for a better understanding of Americans’ views on refugees and the country’s role in solving the refugee crisis.

The impacts of reduced refugee resettlement are far-reaching at home and abroad: The U.S. is abandoning the most in-need refugee populations, including religious minorities; those who assisted U.S. troops and missions overseas; families seeking to be unified with their loved ones; and the 50 percent of refugees who are children. Our allies hosting more than their fair share abroad and our local communities across the U.S. are also feeling the consequences.

This slowdown is in stark contrast to the resettlement program’s long history of support and success, with over 3 million refugees resettled in the U.S. since 1980. Resettled refugees provide widespread economic benefits across the country and revitalize local communities experiencing demographic decline. The program is also instrumental to U.S. foreign policy, supporting the success of diplomatic missions and national security objectives overseas.

The bottom line: a policy that hurts refugees, Americans on Main Street, and allies abroad

The time is now for the American people and Congress to be on the right side of history and stand up for refugees.