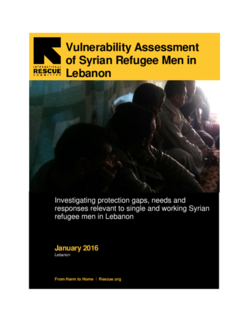 This assessment aims to fill a gap in available data about protection vulnerabilities faced by Syrian refugee men in Lebanon. This gap is significant, as the lack of clear evidence regarding vulnerabilities of Syrian refugee men reinforces a misperception that they face no or minimal vulnerabilities compared with other demographic cohorts. This, in turn, is problematic: both giving unwarranted force to generalizations about the vulnerability of women and children, which can undermine genuine efforts to support and empower those groups, while also leaving the very real vulnerabilities faced by refugee men (as well as other underserved groups) unrecognized and, therefore, not addressed. This is not an argument for reducing focus on any one demographic cohort in favor of another, rather, it is an attempt to highlight the gaps that emerge when humanitarian responses draw on status based categorizations to determine vulnerability at the expense of a more holistic approach. Truly needs-based prioritization and targeting of responses must be based on a comprehensive assessment of the protection context, rather than by equating vulnerability with particular groups or demographic categories.

The assessment relies on data collected through community level assessments, typically conducted with groups of men and women of varying ages drawn from either the refugee or host communities, as well as tailored individual surveys and focus group discussions conducted with single refugee men. A total of 10,113 people participated in community level assessments, while 468 refugee men responded to individual surveys and a further 100 contributed to focus group discussions. Data was collected on five areas of specific focus: (1) threats to personal safety; (2) exposure to abuse and exploitation; (3) access to services and assistance; (4) access to informal networks; and, (5) agency and self-perception.

Key findings included the disproportionate, and sometimes aggressive, targeting of refugee men by both government authorities and host community members. Over two-thirds of refugee men individually surveyed reported experiencing threats to their personal safety. Incidents of abuse and/or exploitation were recounted by 17.74% of respondents, with over half of those incidents related to work. Both in cases of threats to personal safety and exploitation incidents, refugee men reported not seeking help from authorities due to lack of confidence that justice would be afforded them. Nationally, fewer than one in ten individually surveyed refugee men reported receiving assistance in the 30 days prior to the survey (8.12%), and of those who did receive it over 55% described it as only ‘somewhat useful’. Commenting on their capacity to ‘stand up’ for themselves, surveyed refugee men drew a sharp contrast between their ability to do so in interactions with other refugees, as opposed to the context of interactions with the host community. The majority reported a significant reduction in capacity to disagree with others, if the ‘others’ were host community individuals.

This assessment concludes that refugee men, a category not prioritized by the humanitarian system for support, are often not able to access support that they need and, even more often, feel themselves to be excluded from it. In addition, refugee men’s engagement in informal work creates specific vulnerabilities to abuse and exploitation for which effective and consistent responses have not been formulated. These are exacerbated by refugee men’s lack of confidence reporting work-related and other rights violations to authorities, which contributes to an atmosphere of impunity that enables those perpetuating the abuses. Specific recommendations are provided at the conclusion of the assessment; the most important of these being that the humanitarian community more readily recognizes that single and working refugee men have specific protection needs, and strengthen efforts to ensure their inclusion in holistic assessments of the protection environment.