SDG progress: fragility, crisis and leaving no one behind 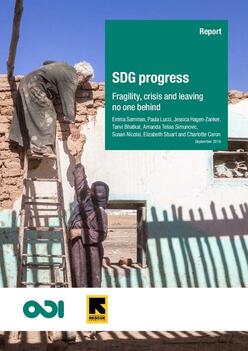 Report: SDG progress: fragility, crisis and leaving no one behind

Up to 82% of fragile and conflict affected states - or up to 4 in 5 - are off track to achieve Sustainable Development Goal targets according to a new report by the International Rescue Committee and the Overseas Development Institute.

Our analysis shows that millions of ‘people caught in crisis’ -  people living in conflict, and/or who are displaced within their own countries or across borders – are in fact being left behind. Failure to take action now means that the Sustainable Development Goals (SDGs) will not be met, undermining the credibility of the international community and leaving millions to die unnecessarily.

The report, SDG Progress: Fragility, Crisis and Leaving No One Behind, examines country level progress against the SDGs and makes projections as to how much more effort will be needed to reach them by 2030. The findings come one year before the first heads of state level SDG Summit to track progress on the global goals will take place.

Despite the 2015 commitment by governments to ‘leave no behind’ as part of the UN’s 2030 Agenda, unless significant progress is made in reaching the poorest and most marginalised people, including those refugees, internally displaced people, and people living in conflict zones, the SDGs will not be met.

The report concludes by laying out five recommendations to ensure people in crisis and other marginalised groups are prioritised in SDG implementation. Recommendations include the establishment of a high level panel of global leaders to catalyse international action over the next 12 months, and a formalised process for tracking progress at country level. The report argues that 2019 is the moment to review progress and revise our strategy before it is too late.

This report provides the hard facts, but behind these numbers is the harsh reality of disrupted lives. Conflict and crisis leaves families without hope or a home, children out of school, young people with no jobs and poor health. Survival is a daily struggle for the majority of these people, who live in fragile and conflict affected states, many as refugees in new and unfamiliar countries that are often already grappling with their own poverty and lack of opportunities.

Our analysis shows that progress is possible even in the most challenging situations. Without this action, the world will fail to meet the SDGs. But it’s not too late if we act now.

The International Rescue Committee has partnered with Richard Curtis—renowned filmmaker and advocate for the sustainable development goals set by the United Nations—to produce a short film that explains how world leaders can turn the tables on extreme poverty, injustice and climate change.