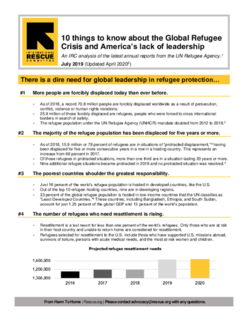 Resource: 10 things to know about the global refugee crisis and America’s lack of leadership

On the heels of news that the Trump Administration is considering resettling zero refugees next year, a new IRC report shows that America’s retreat from global leadership in refugee protection comes at a time of acute global crisis. The IRC analyzed the latest annual reports from the UN Refugee Agency, Global Trends: Forced Displacement in 2018 and Projected 2020 Global Resettlement Needs.

The facts are clear: in the midst of the largest refugee crisis in history when more people have been forced to flee their homes than ever before, the U.S. is stepping away from leadership in refugee protection. And, as the U.S. leads this global race to the bottom, pathways to safety are woefully insufficient for millions of refugees.

Read our report for these takeaways and more: