After 15 years in a refugee camp, this Congolese family is finally together in America

For years, Divin, 28 and Nadine, 24, worried if their family would ever be whole again.

Divin’s mother and two siblings were the first ones to resettle in Boise, Idaho, in 2015. Divin came two years after, forced to leave behind his wife, Nadine, and son, Joe, who came in April. Nadine’s parents and siblings were supposed to arrive with her early this year, but when the Trump Administration slashed the number of refugees admitted into the United States, their flight was cancelled—four times.

“Coming to the U.S. as a refugee is the most difficult way to enter the country,” says Julianne Donnelly Tzul, who runs the Boise resettlement office at the International Rescue Committee. “Refugee resettlement is a lifeline for the most vulnerable. Thousands of families, like Divin and Nadine’s, have gone through the rigorous vetting process, been cleared for travel, and yet remain stranded, their lives in limbo.”

Divin was 13 years old when he fled from the Democratic Republic of Congo. Nadine was 10.

“There was a lot of violence,” Divin recalls. His father had survived a gunshot wound. “Killings were often.”

Both of their families left on foot, crossing the Ruzizi River and into neighboring Burundi.

Growing up in a refugee camp had its hardships and difficulties. And returning to Congo was never an option as the country remained embroiled in conflict for decades.

“There was a lack of food, health assistance and education,” Divin describes. “We were living a desperate life without any hope.” 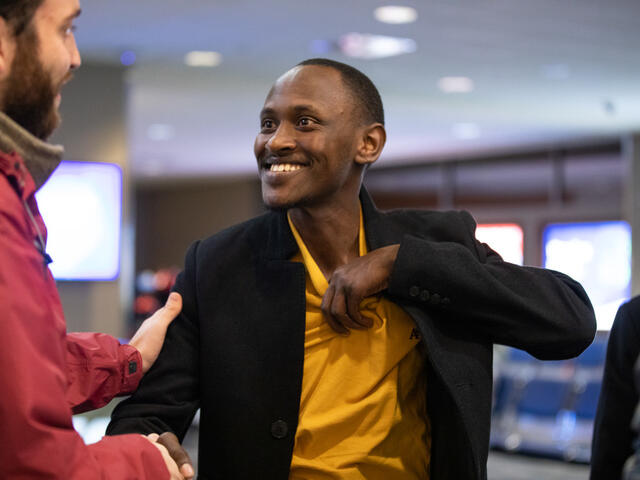 Divin, 28, was one of the last refugees to arrive in Boise, Idaho before an executive order barred refugees from entering the U.S. He had lived in a refugee camp since he was thirteen years old.
Photo: Angie Smith/IRC

Divin doesn’t remember when his family applied for refugee resettlement, but he recalls the exhaustive vetting process. The family underwent countless interviews, repeatedly recounting why they fled Congo and why they could not go back; they endured background checks, medical screenings and other security-related procedures.

They were approved for resettlement in the summer of 2015, but only Divin’s mother and two siblings were scheduled to fly out to Boise for resettlement by the IRC. Divin was never told why he couldn’t join them.

He wouldn’t see his family for another two years. But he wasn’t alone. He met Nadine, and they married and had a son, Joe.

Thousands of families, like Divin and Nadine’s, have gone through the rigorous vetting process, been cleared for travel, and yet remain stranded, their lives in limbo

Joe was six weeks old when Divin learned he would be traveling to America. He departed without his wife and son as they were at a different stage in the resettlement process.

“It was the hardest and saddest decision I have ever made,” Divin says. “It’s never an easy decision to make, to leave your family behind.” But he and Nadine decided that Divin would set down roots, find work, and acclimate to American culture.

Divin was one of the last refugees to arrive in Boise before Trump’s executive order barred refugees from entering the U.S. He was unaware of the mass protests against the travel ban, until he landed in Chicago. 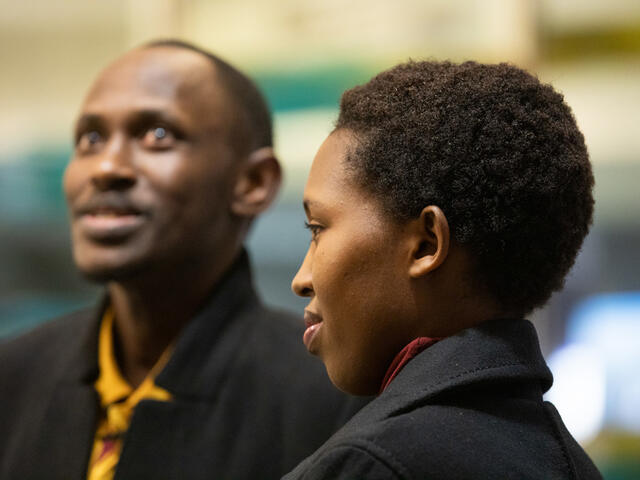 Divin's wife Nadine, who came to the U.S. in April, was separated from her parents and siblings for almost seven months because of current U.S. policies. “I can’t describe the feelings I will express when I see them,” she said.
Photo: Angie Smith/IRC

“I had [a layover in Chicago] and that’s when I saw the crowd of protesters,” he says. “It was very shocking to hear that there was a ban on people who are fleeing from war and violence.”

Divin started thinking: Will I see Nadine and Joe again? Will they be prevented from coming to America? He tried to stay positive and kept in touch with his wife and son via WhatsApp and Facebook. With the help of the IRC, Divin taught himself English by reading books, secured a job at a warehouse, saved money and kept current on news regarding refugee resettlement.

Two years and four months later, Divin was reunited with Nadine and Joe. “It really hurt to not see my son grow up and see his first moments,” Divin says tearfully. “It was very hard to say goodbye to them, but seeing them again after so long...I thought it was a dream.”.

Unfortunately, Nadine remained separated from her mother and four siblings aged 9 to 14, who had been scheduled to arrive with Nadine on April 10. 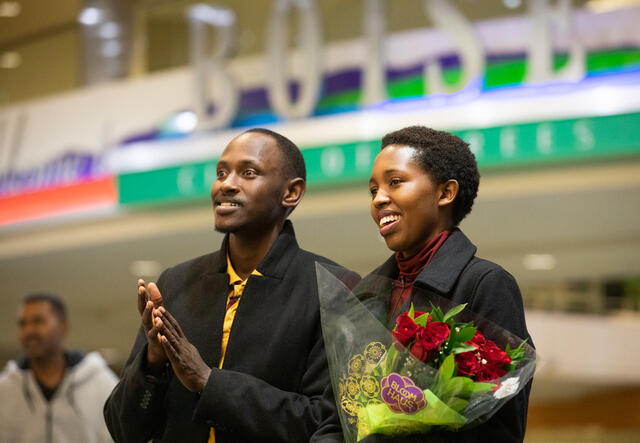 Nadine and Divin wait at Boise Airport to welcome her parents and siblings who were traveling from Burundi, where they lived in a refugee camp for 15 years.
Photo: Angie Smith/IRC

Three-year-old Joe stays close to his father, Divin, tugging at his sleeve as he points to the arrival gates at Boise International Airport. “He’s so excited to see his grandfather,” Divin says, smiling at Joe. “He’s been asking about his grandfather and when he will see him again...and his uncles. He missed them a lot.”

Joe scoots over to his mother, Nadine, who with a bouquet of flowers in hand, holds back tears as she awaits the arrival of her family.

“I can’t describe the feelings I will express when I see them,” Nadine says softly. “But you can imagine, these people are my family.”

When they arrive, Nadine rushes to embrace her mother. Joe's uncle Fidele  who is 19 years old picks up his nephew and kisses his cheek. Divin shakes his father-in-law’s hand. Everyone takes selfies and family photos. 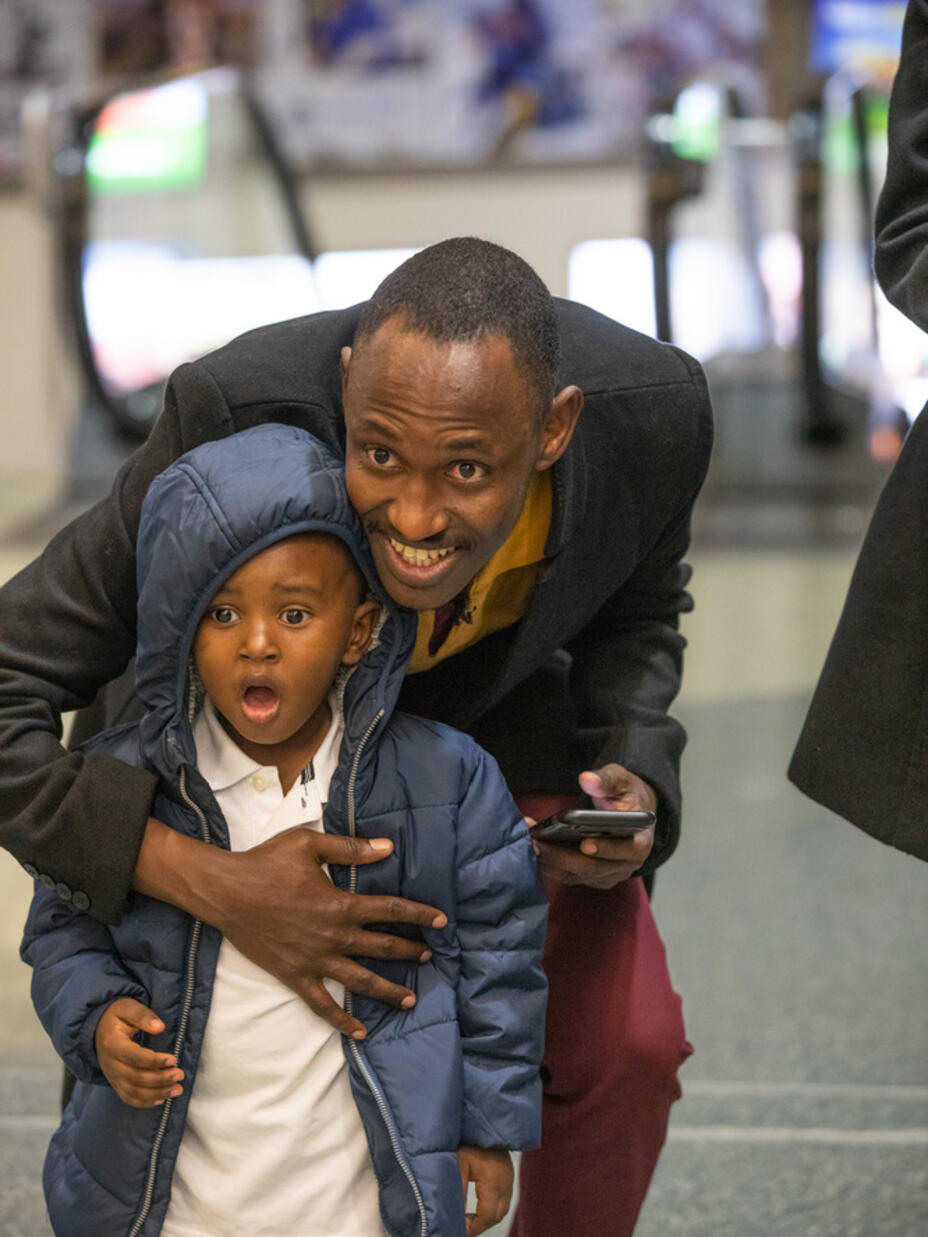 “He’s so excited to see his grandfather,” Divin says of his son Joe, as the three year old catches sight of his grandparents in the airport terminal.
Photo: Angie Smith/IRC

Nadine and Divin’s families are together again, at last.

“I want to thank the U.S. government and all those people who have opened their hearts to welcome refugees,” Divin says, reflecting on the journey his family has endured for more than 15 years. Now he wants to pursue his dreams of studying law or getting a degree in environmental studies. Nadine hopes to work in the humanitarian field.

“For us, we just want to be self-sufficient and live a peaceful life,” Divin says.

The Trump Administration has cut the number of refugees admitted in the U.S. this fiscal year to 18,000. The decision will turn back thousands already cleared for admission. 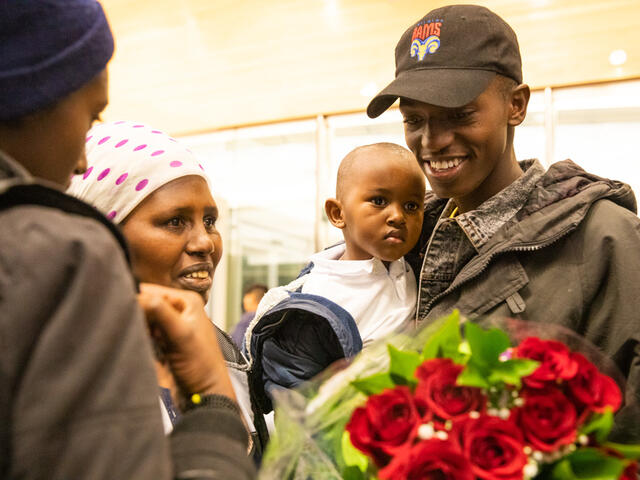 Joe‘s uncle Fidele who is 19 years old arrived with his mother and three other siblings.
Photo: Angie Smith/IRC

Currently, the U.S. has around 30,000 people who have completed Department of Homeland Security interviews for resettlement and are ready for travel. Divin wants Americans to know who refugees really are.

"They are human beings who still have protections and rights," he says. "And it’s important to remember that these people have gone through unimaginable hardship, war and persecution."

“We don't choose to be refugees—it's not a choice."