Meet the Americans who are giving a warm welcome to refugees uprooted by conflict and violence, and helping families start anew in the United States.

One frigid afternoon in December, Jamie Utz drove Naima Samatar and her son, Muhammed, to Camel’s Back Park in Boise, Idaho. The eight-year-old hopped out of the car and anxiously put on a pair of baggy purple snow pants, gloves and an oversized winter jacket.

Hand-in-hand, Jamie and Muhammed walked up the snowy foothills until they reached the top. The boy plopped down on a sled, while Jamie squatted behind. He was nervous but all smiles: It was his first time.

Muhammed let out a joyful shriek. His mother, bundled up in robe, scarfs, gloves and hijab, watched him fly down the steep slope, carefree—reminding her of her own plunge into her strange new life in America. 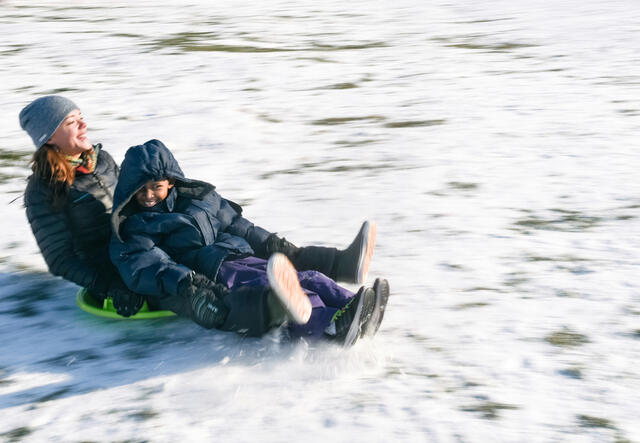 Naima, 28, arrived in Boise last October. She admits she was afraid to navigate the city alone as a single mom without friends, family or personal income. She had never heard of Boise until coming here.

Jamie, a 32-year-old wildlife biologist, had worked with refugees as an English instructor, and the experience prompted her to seek out organizations that help Americans connect with people in their new communities. She could imagine how intimidating it must be to restart your life in a country where you don’t even speak the language.

"I wanted to be a part of helping someone make that transition a little bit easier and just feel like they’re welcome here,” she says. “It all comes down to just being a friend.”

That’s when Jamie discovered the IRC’s mentorship program that allows Americans to help refugees get acquainted with services and resources in the community. Jamie wanted to find a young mother who might benefit from a friend. 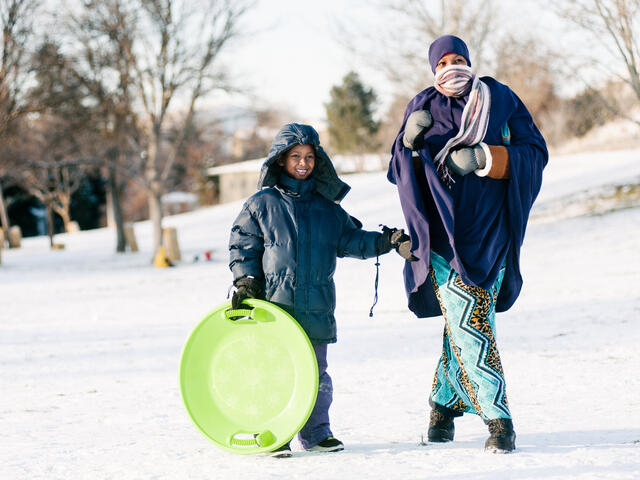 Naima Samatar, right, with Muhammed at a park in Boise. Upon arrival, Naima was matched with a family mentor who helped her adapt to American customs.
Photo: Jonathan McBride/IRC

Family mentors become a critical resource within the community, Jamie explains. She and Naima run errands together several times a week. Naima has learned how to cash checks, pay bills and shop at thrift stores to save money. She also got a job working in the laundry room at a hospital.

"She's really industrious and inspiring,” says Jamie. “She wants to make herself a new life here and that's really wonderful. Naima is living proof that refugees do work hard."

Jamie also spends time with Muhammed once a week and has watched him make massive strides learning English and making friends—not an easy task for a child who never attended regular school while growing up in a refugee camp.

"We are now one family," Naima says. "I don't sleep without saying goodnight to Jamie. Muhammed loves seeing her." 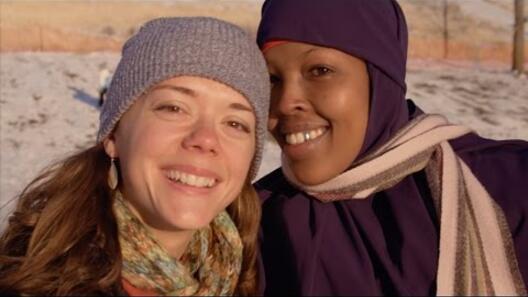 Family is very important Naima, who lost her own. As a teenager, she fled from Somalia—one of the poorest, war-torn countries in the world—after her twin brother and father were kidnapped during a raid on her village.

Her mother, whom she hasn’t heard from since that day, urged her to leave for Uganda, where Naima found safety in a refugee camp.

Away from her family, Naima tried to create her own. She married and became pregnant with Muhammed. Her husband never saw his son, disappearing after leaving the camp to find work.

Soon after Muhammed was born, Naima applied with the United Nations for refugee resettlement in a third country where she would be able to build a new life—a process that took eight years, including three years of rigorous security screenings, interviews and background checks. In the middle of it, Naima remarried. Her husband, Hassan, was obliged to file a separate resettlement application.

Welcoming refugees who have fled from unimaginable brutality is a testament to American ideals...Who are we now, if not this?

“I came here for my son, Muhammed,” Naima explains. “I want him to go to school, grow up and be a good person. He’s doing so well in school, learning English. Refugees are hard workers.”

For her part, Jamie is thrilled to share the family’s learning experiences. Muhammed recently learned how to ride a bike (which was donated by the local community). “He excited about everything” Jamie says. “Every experience is just a joy for him and Naima.”

But President Trump’s executive orders targeting refugees have Naima on the edge. She’s worried that the new travel ban may affect her husband, still in the early stages of the resettlement process. “Why doesn’t Donald Trump like me?” asks Naima. “He doesn’t know me.” 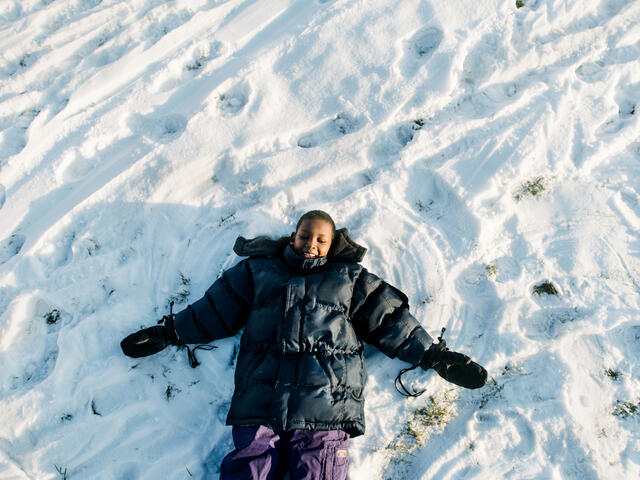 Muhammed creates a snow angel at a park in Boise.
Photo: Jonathan McBride/IRC

Jamie puts it this way: “Welcoming refugees who have fled from unimaginable brutality is a testament to American ideals and to this nation’s history of opening its arms to those in need. Who are we now, if not this? This kind of acceptance is what we all take pride in, and so does Naima.”

Meanwhile, Naima takes comfort in her new friendship with Jamie, who peppers their conversations with optimistic statements to reassure Naima that she will be reunited with her husband.

“I remind her how she is strong and she’s come so far,” says Jamie. “She always says: ‘Maybe next year, we all will have a picnic together with Hassan.’ These are the moments she holds on to for the future.”