Young, pregnant and running from ISIS

After fleeing ISIS in Iraq, a young woman starts over in a refugee camp in Syria—with her infant son.

Almost 17,000 people live in Al Hol camp in northeast Syria, most of them Iraqi refugees fleeing the battle in Mosul, where coalition forces are fighting to retake the city from ISIS.

Among them is 20-year-old Sherine, who left Mosul last November.  Nearly six months pregnant at the time, she, her mother, brother, and five sisters would embark on a journey that found them wandering in desert, fleeing waves of fighting and dodging landmines—searching for a safe haven to give birth to her child.

Like so many expectant parents, Sherine and her husband spent her first trimester dreaming of the future. “In Mosul, we were planning, talking about how to raise the baby, so many things,” she says, staring blankly ahead as she remembers. Then she glances at baby Ihab, her three-week old son, and she smiles. “He looks like his father, but he has my eyes.”

But Ihab’s father is not with her—he died in the early days of fighting in Mosul.

After her son-in-law’s death, Sherine’s mother, Noor, decided it was time for the family to leave the city.

“Life under ISIS was like a prison,” recalls Noor. “It got worse and worse.” Noor, too, had lost her husband, left to raise her seven children alone.

“We heard about Al Hol camp, that life was okay there,” she says. “But the route going west was difficult, and I had no money to pay a smuggler.” 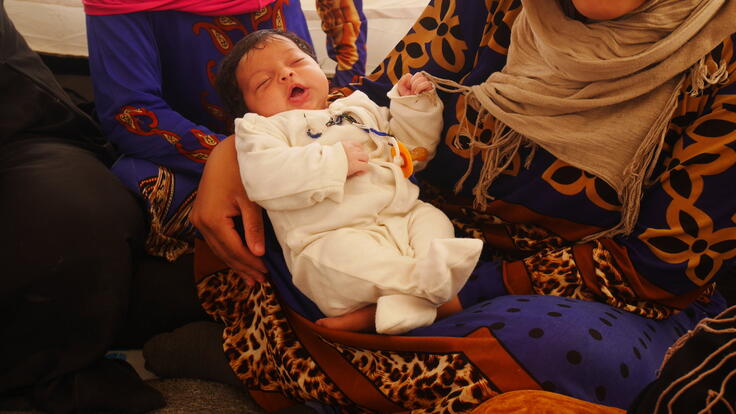 Ihab was born as his mother fled the battle for Mosul. His father was killed in the early days of the fighting.
Photo: IRC

Other families fleeing Mosul made room for pregnant Sherine and her family, who climbed onto the flatbed of a truck. For nine cold hours they rode under the cover of night, finally arriving in Baaj, a town about 25 miles from the Syrian border.

Noor looks over at Sherine as she recounts their two months in Baaj. “She would cry and say, ‘If my husband were here he would take me to the doctor and care for me.’ The baby had started kicking.”

Back on the road

The family was not safe in Baaj. In January, airstrikes forced them into the desert closer to the Syrian border. They moved between villages gutted by years of armed conflict. Sherine had advanced into the final weeks of her pregnancy.

“We sheltered in bombed-out huts, collecting rain water and eating food from others,” says Noor. “We were waiting for a chance to go to the border, but we didn’t know the way.”

As her mother speaks, Sherine lifts the hem of her robe and pulls down her dusty sock, revealing white rings of fungus covering her skin. “I’ve had these for a while,” she says. “In the villages, we only had dirty rain water and no soap. I didn’t bathe for a month.” She sighs. “In Mosul, we took showers every day.”

Labor and birth on the border

In late March, Sherine went into labor in a cold, windowless room. “Labor was so hard,” she says. “I was scared.“ Her 19-year-old sister, Rima, remembers the moment. “We were all in the same room when she gave birth to Ihab. Water was coming through the roof. She was bleeding. We were so cold, but we used all of the blankets for Sherine and the baby. We didn’t want to lose them.” 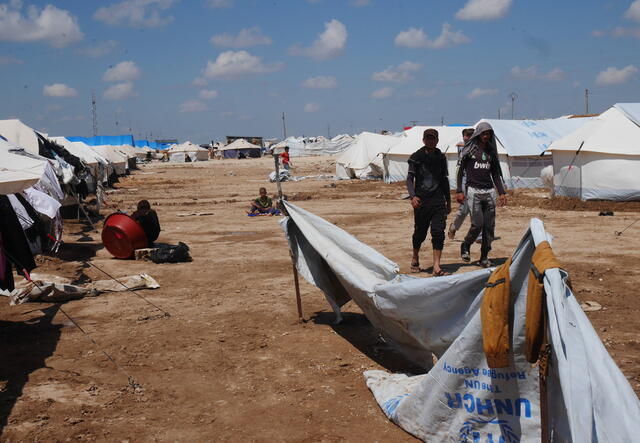 Two days later, Sherine walked for 11 hours carrying her infant son to reach the Syrian border. The family joined others on a route strewn with mines. “We were terrified,” says Sherine. “People were literally moving mines out of the road with their hands. ISIS fighters were also on the road, trying to leave Iraq. We didn’t know who to trust.” After days waiting at the border, the family was transported to Al Hol, joining thousands of other traumatized Iraqis and Syrians, all fleeing ISIS.

The start of a new life

It is now mid-April. Sherine and her three-week-old baby are struggling. The camp has limited health services. Pregnant women, lactating mothers, grandmothers like Noor who cope with chronic disease, go without care or medication.

Sherine and Ihab get help at a temporary International Rescue Committee clinic that treats 100 patients each day. The IRC’s outreach workers also visit her family. “They listen to us,” says Noor. “We told them about everything that happened. They make us feel comfortable, give us hope.”

There are positive developments. The IRC is building a permanent health clinic, and a new center for women and girls, scheduled to open in May, a refuge in the desert camp with air-conditioned tents where women can get counseling, join support groups, and participate in recreational activities.

Life is difficult, but Sherine, her mother and her sisters remain together, helping each other. Rima looks around at her family. “Now here we are,” she says. “My sisters are safe, things will get better. We feel we are reborn again.”

Find out more about our work in Syria and how you can support families in crisis.