For children who fled ISIS, a safe space to play, learn and just be kids

Despite her young age, 11-year-old Farah* has gone through more traumatic experiences than most people should in a lifetime. In 2014, her family was forced to leave their village on the outskirts of Mosul and move to the east of the city, where ISIS was gaining control. A few months later, Farah’s father died. She then spent two years with her family living under the harsh rule of ISIS. She has never been to school.

“I barely let my children leave the house—to keep them away from ISIS,” Farah’s mother Yasmin* explains. “ISIS played with children’s brains.”

As the battle to retake Mosul reached their neighborhood, Farah’s family undertook a perilous journey to find safety. 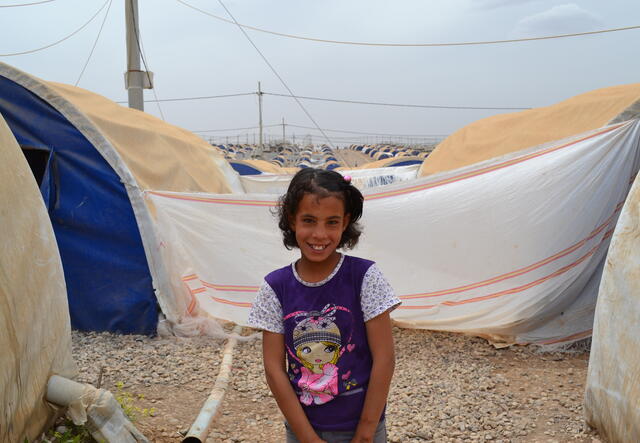 Eleven-year-old Farah outside the tent in Nargazilia camp where her family is living after fleeing the battle to retake Mosul from ISIS. Farah's father died in Mosul.
Photo: Jess Wanless/IRC

“We were starving in Mosul,” her mother Yasmin explains. “We told ourselves, ‘If they shoot us, then so be it.’ We had nothing—no water, no food.”

ISIS placed mines and booby traps in neighborhoods and surrounding areas to keep people inside the city and even used them as human shields.

“There was one person in the neighborhood who knew where all the mines were, and who could keep us safe as we escaped. But he charged money, and we didn’t have any. So we had to risk it alone,” says Yasmin.

Somehow, Yasmin and her children made it out alive. Her extended family tried to flee as well, but they were not as lucky. “We told them which way to go, which way was safe. But three of them were killed by a mine. The rest turned back. At first ISIS didn’t let them bring back the bodies. They stayed in the open for three days and only after that were they able to bury them.”

Inside the IRC safe healing and learning space in Nargazilia camp. It's a place where children who fled ISIS have a chance "to forget their worries, to play and to just be kids,” says the IRC's Mary Winters.
Photo: Jess Wanless/IRC

Today Farah lives with her mother and six siblings in a tent—identical to the thousands of others that make up Nargazilia camp. As summer temperatures rise toward 50 degrees Celsius [122 degrees Fahrenheit], it’s too hot to go outside. This means it’s hard for Farah to meet other children and break the monotony of living in a camp.

As an escape, each day Farah and her six-year-old brother Youssef* spend time in the IRC’s safe and healing learning space.

“The safe space is designed to provide children aged six to 11 with the chance to forget their worries, to play and to just be kids,” explains IRC child protection and education coordinator Mary Winters. “Boys and girls take part in activities and games designed to help them to process the trauma that they have experienced over the past three years and give them the tools to recover and build up their resilience for the future.”

“I really like the teacher,” says Farah. “I learned that I should be nice to my brothers and sisters and to not fight with them.” 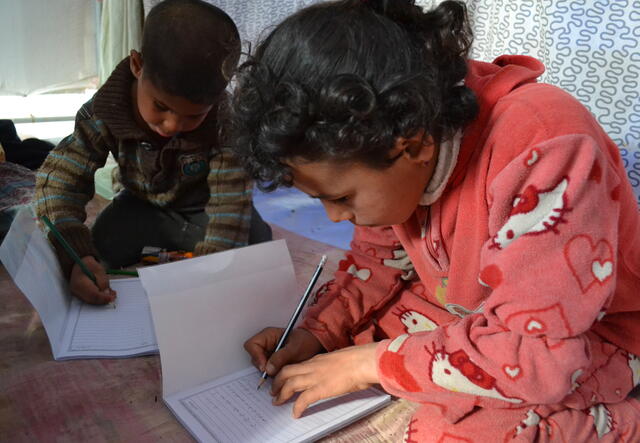 Farah and her little brother Youssef practice their writing at home in their tent after visiting the IRC safe healing and learning space. Farah has never been to school.
Photo: Jess Wanless/IRC

Many children like Farah that have lived under ISIS rule have often seen things that no child should have to see.

“Even now in the camp we still carry this fear with us,” explains Farah’s mother, Yasmin.

Since Farah and Youssef have started going to the IRC’s safe space, Yasmin has seen their behavior change for the better.

“Now Youssef makes everyone laugh,” she says. “He’s always telling us that we have to go and wash our hands before we eat food—something that he learned there.” She adds, “Farah knows exactly what time the activity starts and is always there on time so she doesn’t miss a single minute.”