A mother under fire in ISIS-held west Mosul

First her family were used as human shields by ISIS. Then they were killed by a coalition airstrike.

Alina* vividly recalls the day ISIS fighters moved in with her family.

“ISIS took over one room and hid their guns there,” said the 29-year-old mother, who lived in a two-room house in the Nablus neighborhood of west Mosul. “They warned me: ‘If your children make a sound or tell anyone that we are here, we will beat you and shoot you.'”

Alina, her husband and children were among the more than 1.5 million residents trapped when ISIS captured Iraq’s second largest city in 2014. Coalition forces have since retaken much of Mosul, but as the battle reaches the narrow, winding streets of the old city, some 600,000 people remain under ISIS control. Two-thirds of them live in these densely populated neighborhoods in the old city west of the Tigris River and face increasing danger. Many are being used by ISIS as “human shields.” 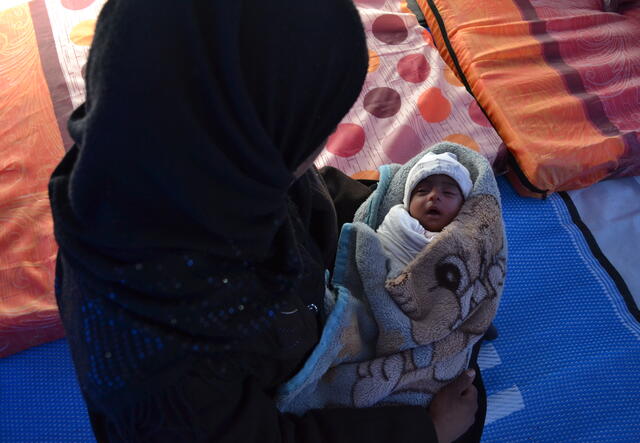 Alina, 29, returned home to ruins just after giving birth to a baby daughter: The rest of her family had been killed in an airstrike targeting the ISIS fighters who took over their house in west Mosul.
Photo: Jess Wanless/IRC

“The ISIS snipers would shoot at helicopters from our roof,” Alina recalls. “Once my husband told them not to go on the roof because it scared my children, so they beat him with the butt of their gun.”

A month ago, Alina left her three daughters and son—aged 2, 5, 8 and 11—at home with her husband to give birth to a baby daughter at a midwife’s house.

“I was away for ten days and when I came back I found my house had been destroyed,” she said. “I lost my husband, my children.”

With ISIS barring civilians from using phones upon pain of death, it is difficult for news to travel across the city. When Alina returned to Nablus, she heard from neighbors that a helicopter had spotted an ISIS sniper on the roof, shot at him, and then bombed the house. 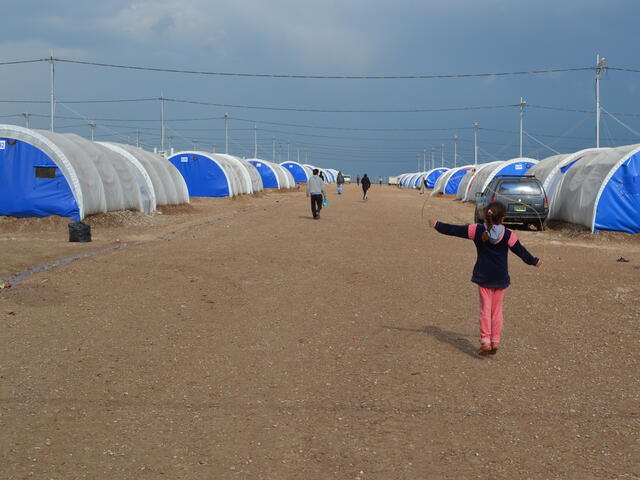 After her family were killed, Alina joined neighbors who were making their way to the shelter of Nargilzila camp, some 20 miles outside Mosul. More than 200,000 people have now fled the fighting in west Mosul.
Photo: Jess Wanless/IRC

“When I saw it I could not breathe,” she said. “I thought I would die.”

“I couldn’t even bury my children—their bodies are still under the rubble. I don’t have anything to live for now.”

Alina says she sat in the ruins of her family’s home for three days, crying. Then she met some neighbors who were making their way to the safety of a camp. She left with them, becoming one of the more than 200,000 people who have now fled west Mosul.

Those who remain face a stark decision: to stay or flee; to risk being targeted by snipers or be victims of air strikes; to endure hunger or to get caught in crossfire. The number of civilian casualties continues to rise as the fighting escalates. 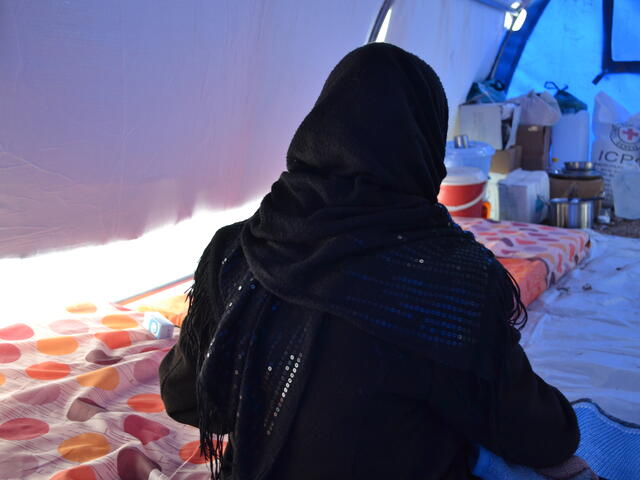 The IRC is providing psychological counseling to help Alina recover from the trauma of losing her husband and older children. Neighbors in the camp have been pitching in to help her care for her infant daughter.
Photo: Jess Wanless/IRC

Alina and her baby daughter are now living in the Nargilzila camp, around 20 miles northeast of Mosul, where the International Rescue Committee is supporting Alina with psychological first aid—and also helping her to locate siblings she hasn’t been able to see in years.

“I don’t have anyone now. It’s just me and my baby daughter," she says. "Her name is Dunya. ‘Dunya’ means ‘world’—because she is my world.”

The IRC has been working in Iraq since 2003. As people flee the fighting in and around Mosul, we are providing emergency cash to displaced families to help them pay for rent, food and other basics. We have provided essential items such as mattresses, heaters and toothbrushes to almost 80,000 people who have fled ISIS. We are also providing support and psychosocial activities for children to help them cope with crisis, and are working to ensure women and girls are protected and supported.