As the battle to retake Mosul from ISIS enters its most dangerous phase, desperate Iraqis are fleeing the city despite the danger of rockets, booby traps and snipers.

They waited until night fell to flee ISIS. Amira* opens the door slightly to check that fighters weren’t patrolling outside her house, which was partially damaged by a bomb.

It would be an extremely risky escape—the family was caught once already trying to leave Mosul, where an ongoing battle to retake Iraq’s second largest city has put a million civilians in the crosshairs. They were lucky—many are executed if they are caught, but Amira was forced to pay a fine and her husband beaten.

The last two years under ISIS rule has been a “disaster,” says 40-year-old Amira, whose two brothers have been killed by ISIS militants.

“If I didn’t dress under the black cover—two layers—and cover my eyes, I would be punished,” she says.

Her husband Nabil* adds: “ISIS would kill me if I shaved my beard. They would cut my head off. Because we were afraid of them, we did what they wanted.”

The one thing the couple refused to do was send their 10-year-old daughter to school under ISIS rule, as students are taught with ISIS’ curriculum. Amira cites an example of one arithmetic lesson, which incorporated shootings.

As the battle for Mosul enters its most dangerous phase, there are growing concerns about the condition of the 700,000 civilians trapped in the western part of the city.

Food, water and other basic necessities are in short supply. Prices for whatever is available have soared—just one egg costs over $1, about 15 times the going rate elsewhere. Despite the risk, more than 5,000 civilians have fled every day since February 26, according to the International Organization for Migration. 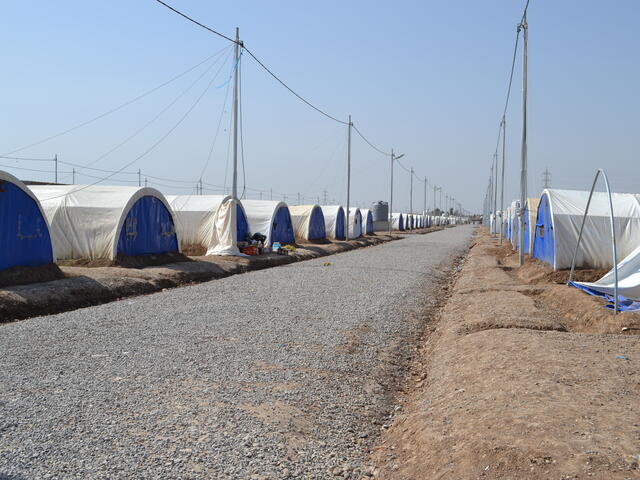 The IRC is providing emergency supplies in the Khazer camp, temporary home to more than 30,000 displaced Iraqis from Mosul.
Photo: Jessica Wanless/IRC

"We must not forget that men, women and children inside western Mosul have suffered for more than two years under ISIS brutality," says Wendy Taeuber, the International Rescue Committee’s country director for Iraq. "Civilians must be kept out of the firing line and given the opportunity to escape the city safely."

Amira and her family had to plan their clandestine escape with great care. Mobile phones are forbidden: In Mosul, merely possessing a SIM card is punishable by death. Nevertheless, a neighbor kept a “secret” phone, so Amira was able to talk to her brother, who resides in the Kurdish region of Iraq.

"The battle was coming to us," she recalls him say during their brief conversation.

With just a few belongings stuffed into their daughter's backpack, the family walked for hours across mostly deserted terrain until they reached what they refer to as an "ISIS fire zone."

"No one was there, but we ran as fast as we could until we met the [Iraqi] army, holding white flags and a torch,” Nabil recalls. "I thought my daughter was not going to make it because she is young…but we made it to safety.”

We must not forget that men, women and children inside western Mosul have suffered for more than two years under ISIS brutality.

After passing through two security checks, the family found refuge in the Khazer displacement camp, where aid agencies like the IRC are providing emergency supplies and access to health care to thousands of Iraqi families. There, Amira and her husband were reunited with relatives who had escaped earlier.

“When we met them we cried for sadness and happiness at the same time,” Amira says.

While the family has found some respite, they worry about relatives left behind, including Amira’s eldest daughter and four young grandchildren.

The battle to retake western Mosul is expected to last several more months—the IRC and other aid agencies are preparing for another 200,000 Iraqis to flee their homes.

“Everything must be done to keep civilians out of the firing line,” says the IRC’s Wendy Taeuber, “and as Iraqi forces reach individual neighborhoods, people must be given the opportunity to escape the city safely."