An aspiring actress, and refugee, helps her friends believe in themselves

Christelle Igihozo never imagined she would leave an impact on other people’s lives. As a refugee from the Democratic Republic of Congo carving out a new life in the United States, she felt she needed others more than they needed her.

Christelle, 23, originally fled with her mother and siblings to South Africa, where they faced xenophobia. The family was then resettled by the International Rescue Committee (IRC) in Boise, Idaho, in 2018. Today, Christelle is an aspiring actress and model, a college student, and a resettlement assistant at the IRC, helping other refugees start their new lives. She is also a cherished friend to some of the first people who welcomed her to Boise, including Janna Brown, 29, and Charlee Andree, 16. Below, they talk about how Christelle has changed their lives for the better. 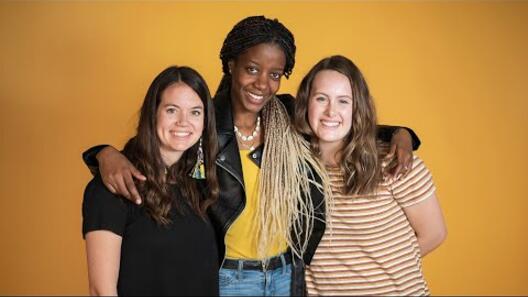 Christelle: I met Janna and Charlee at church…how did you get my number? [Laughs.]

Christelle: Well, [Janna] texted me, “we should hang out,” so we had lunch. Charlee comes to our house to hang out. She loves my little brother. At first, I thought she was my age. When I found out she was only 16, I was like, what?! [Laughs.]

Janna: I wanted to introduce myself and get Christelle’s number ‘cause I had just recently moved to Boise too. I really needed a girlfriend so I thought this would be a good opportunity to make a new friend. 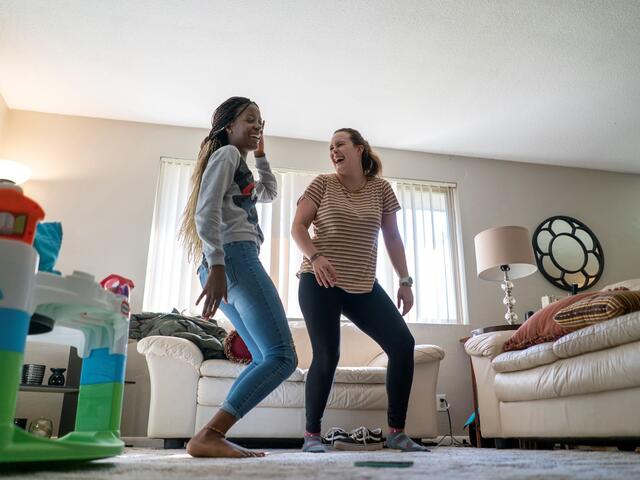 Charlee: I am always very intrigued by different cultures. I wanted to learn from Christelle and her family. I would hang out at their house and a friendship blossomed because I was around all the time. [Laughs.] I made her a friendship bracelet.

Christelle: Janna taught me how to drive.

Janna: We got to know each other really well. I was a relaxed teacher, which is a good thing because I think Uncle Chris (Charlee’s grandfather, Chris Johnson, featured in a story about his friendship with Christelle's mother) stressed you out.

Janna: Hearing about the struggles [Christelle and her family] went through, and then coming to a new country to pursue their dreams was really inspiring. 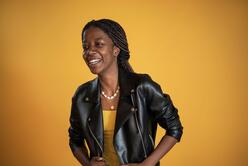 Originally from the Democratic Republic of Comgo, a country that has spent decades in the grip of violent conflict and economic unrest, Christelle and her family were resettled by the IRC in October 2018. She dreams of becoming an actress and model.
Photo: Andrew Oberstadt, IRC

Christelle: Charlee mentioned I impacted her confidence, but that’s something I learned from her. And Janna is a dream chaser, she makes things happen. I’m surprised by what they just said because I needed to learn from people. You don’t realize that you are impacting other people’s lives. That was really touching to hear.

I started to learn to let people come into my life because before I just had my family around me. In South Africa, we all slept in one room. But here, people are friendly and they want to help you-- so I learned to let them be part of my life, to let them love me, and to trust that they’re not going to hurt me.

Charlee: Welcoming…it’s a lot easier than people make it out to be. It’s just about showing up. You go over to their house and you sit on the couch and watch Baby Shark with Alvin [Christelle’s little brother] for two hours. It starts from a place of friendship.

Janna: I have a husband but I needed a girlfriend [laughs] and that’s something I’ve struggled to find here in Boise. So I’m really thankful for Christelle. I am experiencing life with another family, Christelle, her mom Jacqueline and sister Raissa, and I think that is something we miss out on a lot in this very individualistic culture in America.

Charlee: I’m only sixteen and I have three wonderful role models to look up to who aren’t even my family by blood.

Janna: People who don’t want to welcome refugees into the U.S. are missing out on personally seeing resilient, strong human beings who’ve been through so much and have so much to offer to our community.

Christelle and her siblings pose with their mother, Jacqueline Uwumeremyi.
Photo: Andrew Oberstadt

Charlee: It’s only through personal experience and by immersing ourselves in the lives of people like Christelle’s family that we truly learn what it’s like to be human. Humanity isn’t defined by borders, but by love. It’s a scary thing that people close themselves off to that.

Janna: Since moving to Boise, Christelle and her family were the first family I got close to.