For the first time, this refugee mother experiences America’s embrace

Jacqueline Uwumeremyi, 43, fled from the Democratic Republic of Congo to South Africa because of violence. As refugees, she and her family faced constant xenophobia and feared for their lives. In October 2018, she was resettled with her five children in Boise, Idaho, where she “felt love for the first time.”

Jacqueline was warmly embraced by local church members and other neighbors, including Pastor Jenny Hirst, 45, and neighbor Chris Johnson, 63. Below, the three talk about their first encounter, what they’ve gained from their relationship, and why more Americans need to welcome families like Jacqueline’s. 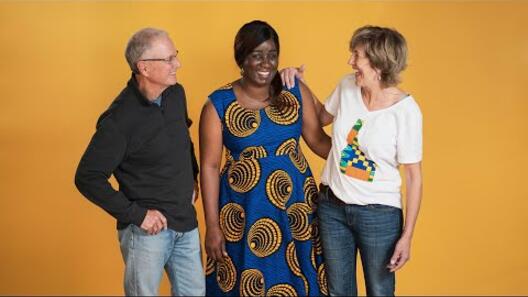 Video
Stories of Welcome: A refugee mother is embraced by her new community

Jacqueline: When we came [to Boise] in October last year, it was our first time experiencing this kind of cold weather. My daughter, Raissa, would wait at the bus stop to go to school. She told me that if she didn’t get another means to go to school, she would drop out because she thinks one day she will freeze and die. [Laughs.]

Chris: It was crazy ’cause I took Charlee [Chris’ 16-year-old granddaughter] to school every day for two months and we would go on a certain route. One day I decided to go a different way. We’re driving by a bus stop in Jacqueline’s neighborhood and there’s this one really tall girl, and I think, “that’s that girl that we met at church yesterday.”

So I pulled over at the bus stop and I told Charlee to [invite] her to jump in with us. Had I not gone on a different route, I would have never seen Raissa and she would have frozen to death. [Laughs.]

Jacqueline: He—we call him Uncle Chris—was so concerned about so many other kids that go to school, but his car could not contain every one. He said if I cannot help all, I can help at least one. 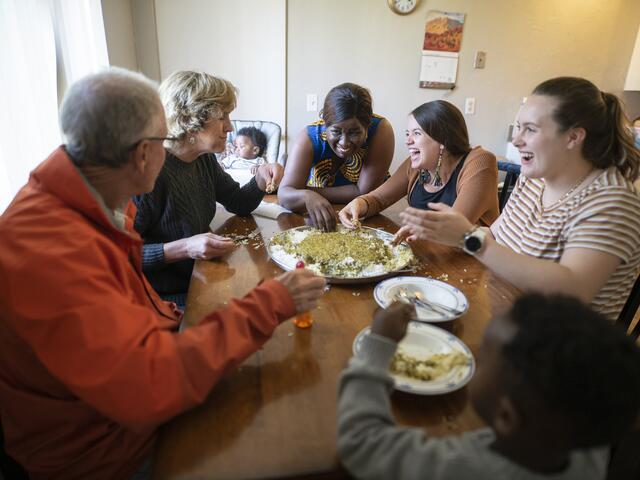 Jacqueline, center, shares a traditional Congolese meal with her neighbors at her home in Boise.
Photo: Andrew Oberstadt/IRC

Chris: Oh, it’s an honor to be considered an uncle in this family.

Jenny: I just remember the very first time I met Jacqueline and her family...there was something about her and the kids that I just wanted to stay there and hang out and get to know them. I think I knew early on that we would become friends.

We sealed the deal of being friends when you came over for Thanksgiving and were introduced to all the different foods.

Jenny: Yeah, I have no idea why we call them deviled eggs!

Jacqueline: We didn’t know that people [in Boise] would help us the way they did. We lived in South Africa where life is also hard, so we were not scared—we knew that we would make it in America—but the love...this love we had never experienced before. Because where we came from in South Africa, they killed [foreigners], so... [Pauses to wipe tears.] 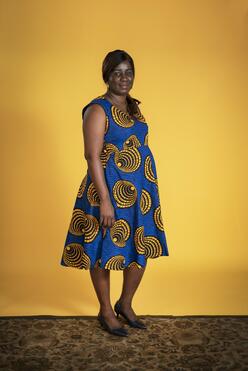 Originally from Congo—a country that has spent decades in the grip of violent conflict and economic unrest—Jacqueline was resettled by the IRC in October 2018. Jacqueline speaks five languages and works as an interpreter for other newcomers in Boise.
Photo: Andrew Oberstadt/IRC

Chris: Jacqueline and Raissa wanted to go somewhere, so I was apologizing ’cause things were running late. Jacqueline felt guilty for using my time. She said, “I’m so sorry, Uncle Chris, I’m so sorry.”

And I said, “Jacqueline, what you need to understand is that living in America is really hard. And then she looked at me and she said, “No, it’s not hard to live here. Let me tell you what’s hard.” And she started sharing some of her stories of surviving in Congo. I was thinking, “I’ll never use that word again to describe what I perceive as difficulties.”

Her family has saved me from my own selfish desire to be comfortable, to have everything go just how I plan it out.

Jenny: Jacqueline has incredible strength and compassion, and [she is] tireless as a single mom, raising the most amazing children. I think that’s how we connected initially, as I saw this drive—to make sure that her children were going to be successful in this new life. I just want to be part of that, cheering Jacqueline on. Jacqueline never knows what’s around the corner, but you [won’t] know if you don’t keep moving forward.

I don’t think we can quantify the impact that refugee resettlement has had on Boise. From businesses to innovative ideas...that all makes us better people. And that’s what we need to express loud and clear to those in our country—it’s not a taking away, it’s adding to who we are.

Chris: I have similar conversations with people. “What are you doing over there, Chris, and why are you taking all this time and energy to help them?” And I say, “You’re missing out.”

What I found is that people drive by their house or drive by the bus stop and make certain types of judgements. Once you know them, you just want to hang out with them.

How do you not show up when the phone rings or how do you not take these kids to do something that they’re cautious of doing because they don’t have anybody to introduce them to what’s out there? It’s about just showing up, listening to their needs and clearing a path. It is not that hard.

I don’t think we can quantify the impact that refugee resettlement has had on Boise. From businesses to innovative ideas...that all makes us better people...it’s not a taking away, it’s adding to who we are.

Jenny: The really cool thing is that, you know, for the first few months you were receiving rides to and from appointments and things like that, but now that you’ve got wheels…

Chris: That used to be my job!

Jenny: You’re serving your community. It’s just this ripple effect. Your story keeps unfolding and we get to witness that.

Jacqueline: I think love is contagious. So, when you are with people who are loving, you become loving and you give love.

Editor’s note: This interview was conducted in 2019, but Jacqueline, Jenny, and Chris’s deep friendship has continued during 2020 and through the COVID-19 pandemic. While disappointed that they cannot physically be together as much as they would like, they are still “constants” in one another’s lives, as Jenny puts it. Jenny chats with the family over Zoom and trades emojis over text with Jacqueline, even as she misses the spontaneous get-togethers and hugs they used to share. Chris checks in with the family once a week and takes pleasure in continuing to offer any help they may need.