Last year, the International Rescue Committee (IRC) in Greece hosted four “master classes” in which refugees living in Lesbos taught and served their favorite recipe from home to residents of the island. Some of the refugees who took part talked to us about their experiences and shared the recipe of the dish they prepared for the group. Jacqueline shares her recipe for vegan Mahshi (vegetables stuffed with rice).

Jacqueline came to Greece two years ago with her brother to claim asylum. She now lives in Mavrovouni refugee camp on the island of Lesbos.

“I want to stay in Greece”, says Jacqueline, who is Kurdish and from Syria, “because I feel like [I’m at] home here”. 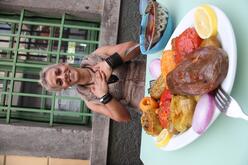 Jacqueline is taking Greek classes organized by the IRC twice a week. She was nervous about starting the language class. “At first, I didn’t want to begin, I was afraid, but after some classes with Maria [her teacher], I felt really comfortable”.

As Jacqueline waits for a decision on her asylum claim, preparing food has brought her joy.

“I want to be happy; this means cooking for other people”.

And her delicious meals have proved very popular.

“I cooked for people inside the camp in Moria and everyone loved the food, so word spread out for my cooking”, she says. “I have since cooked for the management of the camp in Lesbos and NGO visitors.”

One of Jacqueline’s recipes is for Mahshi - a vegan meal made up of stuffed vegetables with rice.

“This recipe is for special guests, when you want to spoil them and show a gesture of hospitality! For us Kurds, the longer a dish takes to be ready, the more you show to your guests how much you appreciate them”.

Jacqueline, who lost her parents when she was young, taught herself how to make the dish.

She says she is like a mother in the camp: “I cook for everyone who doesn’t know how to cook”. 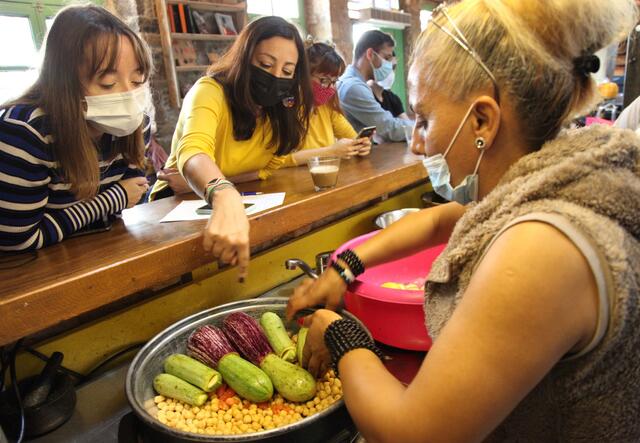 Jacqueline demonstrates how she would prepare the Mahshi dish. “This recipe is for special guests, when you want to spoil them and show a gesture of hospitality!”, she says.
Photo: Stefania Mizara

It’s not easy for Jacqueline to prepare food in the camp’s “complicated” conditions, which include sharing a tent with four other people.

“In the camp, I can only cook when there is electricity”, she explains.

“Living in a tent, I am adapting my cooking to two hours of electricity, and I have to prepare everything beforehand.”

But sharing meals can create a sense of community, Jacqueline says.

“I love making foods to bring people together, laugh, eat and create connections.” 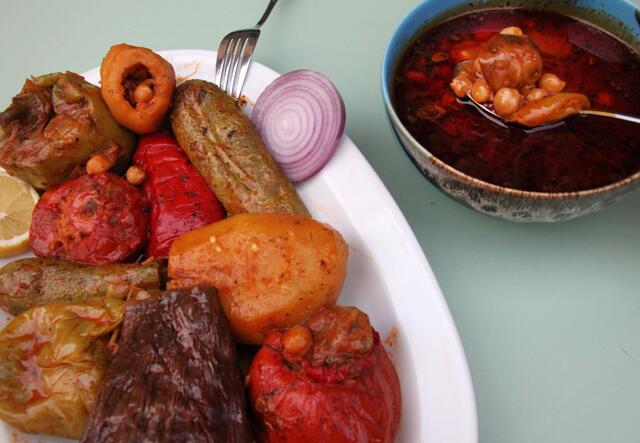 Follow the steps below to learn how to make Jacqueline’s vegan Mahshi. 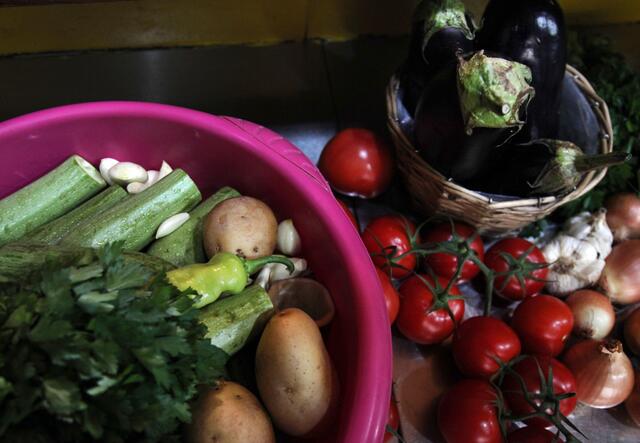 A range of fresh vegetables make up the Mahshi dish.
Photo: Stefania Mizara 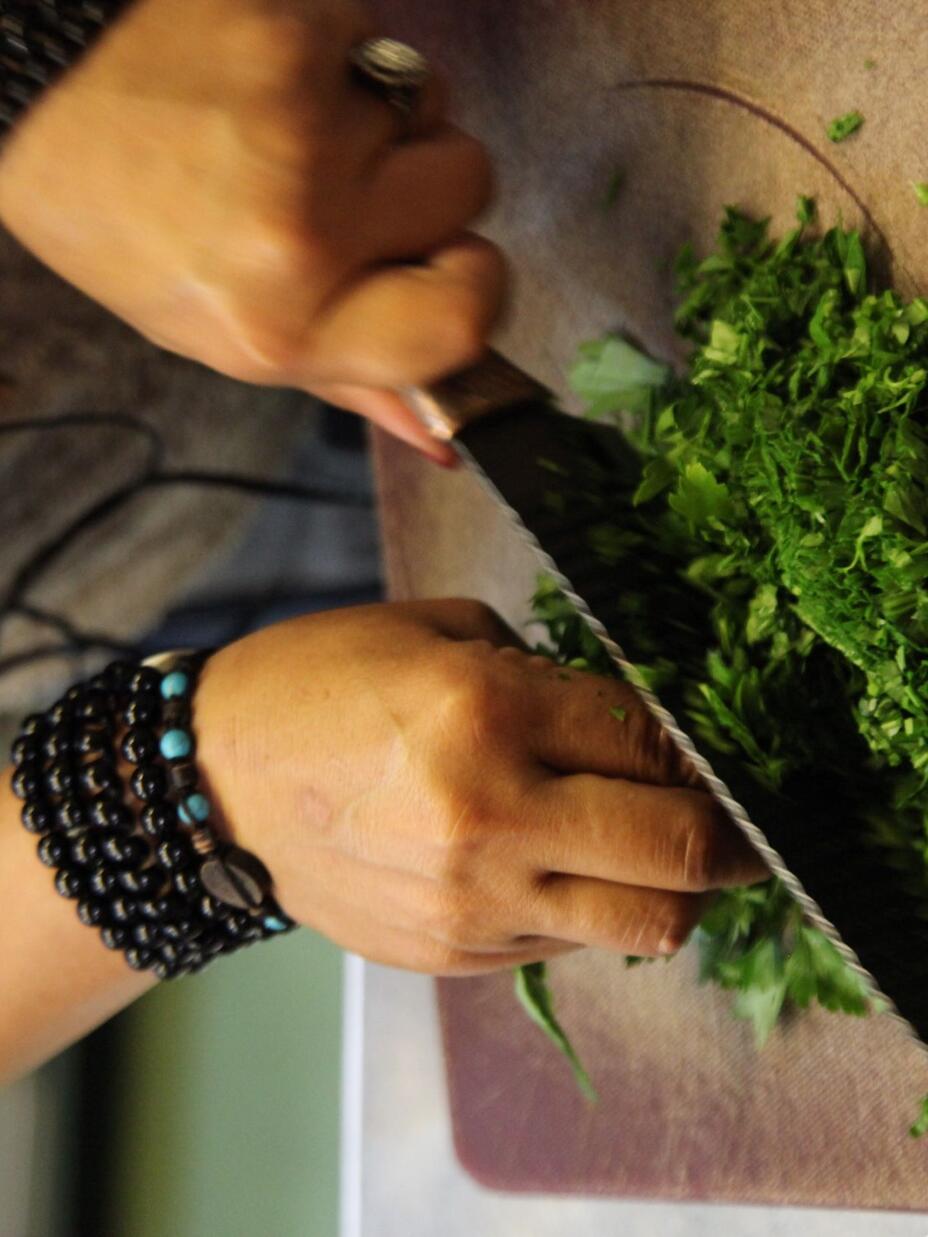 Chopping the parsley before adding it to the mix.
Photo: Stefania Mizara 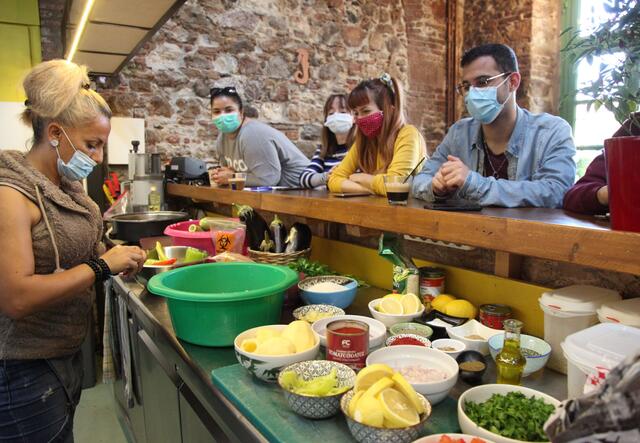 “I want to be happy; this means cooking for other people”, says Jacqueline.
Photo: Stefania Mizara 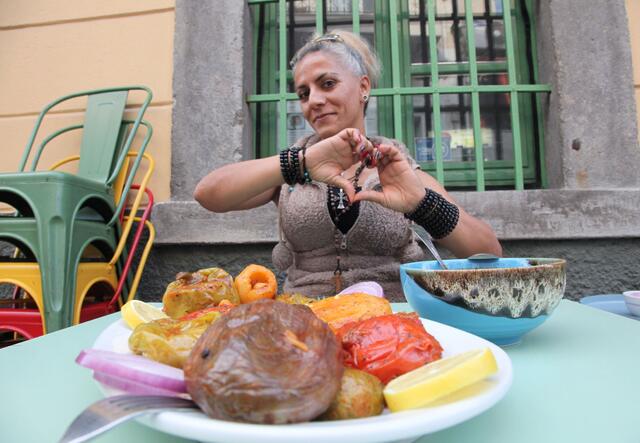