“This is the recipe that changed my life,” says Chef Hamidullah Noori, a refugee from Afghanistan resettled with his family in the United States in 2015 through a Special Immigrant Visa (SIV). “Sometimes I still cry when I peel potatoes.”

Chef Noori remembers his mother frying leftover potato peels, tossing them with sautéed vegetables in a sauce made from roasted red peppers. “This was our survival meal.”

“Life was really tough for us then” he says, “and life is still really tough for people there now. Even worse now. Thousands of kids are suffering … mothers are cooking something for them to survive.’’

Trained to cook in Afghanistan, Chef Noori began working in a kitchen immediately after arriving in Virginia. Several years later, he opened The Mantu, a restaurant in Richmond offering modern Afghan cuisine.

“When I first came to the United States, I went to the IRC to help me find a job in a restaurant. I showed off some of my skills and talents, and they decided to change my position to chef.”

When he opened his restaurant, he called it The Mantu, after the Afghan dumpling. But the word also means “me and you.” 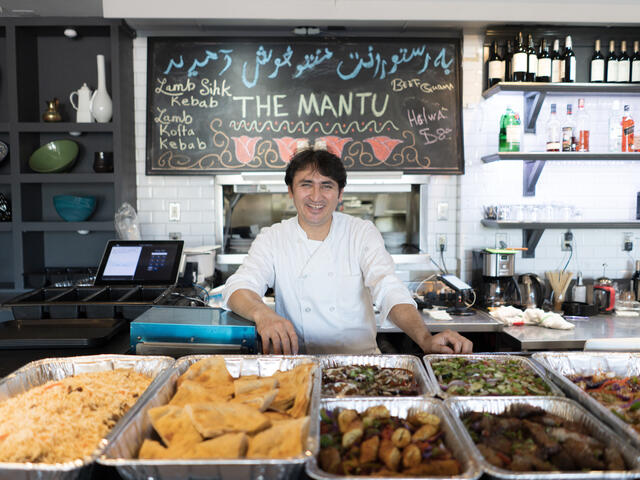 Chef Noori at The Mantu, his modern Afghan restaurant in Richmond, Virginia. He and his team cook meals to welcome newly arrived refugees.
Photo: Andrew Oberstadt for the IRC

“I always feel responsible to hire people who are in need,” says Chef Noori. “I received a call from the IRC, they said, ‘We have an Afghan cook.’ Now he’s the chef at The Mantu.”

Chef Noori also works with the IRC to deliver meals to newly arrived immigrants, especially those from Afghanistan … remembering the welcome he and his family received in their new home in America and the opportunity to make a new start. 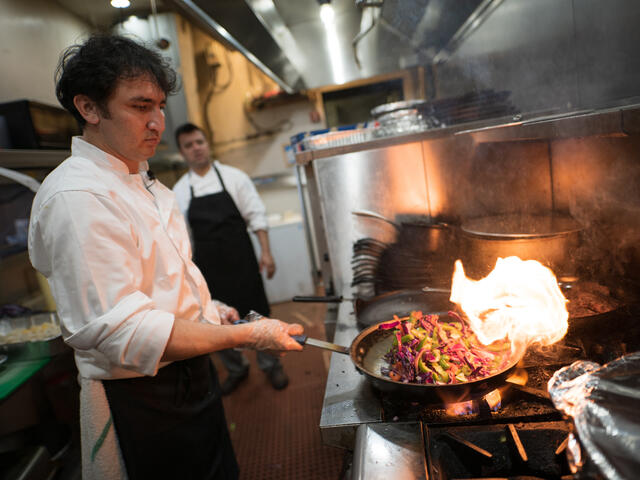 Chef Noori worked as an executive chef in Afghanistan before growing violence forced him to leave his home and resettle in the United States with his family.
Photo: Andrew Oberstadt for the IRC

“Between 1985 to 2015, I had no future,” he says. “Never thought of my dreams and goals, never about tomorrow—we never knew if we had tomorrow. This is the reality people still face today.”

Peeled skins of 5 potatoes, washed and dried with a paper towel
Corn oil for deep frying

Afghan spices, a pinch each of ground:

For the roasted red pepper sauce:

Peel, wash and dry the skins of 5 potatoes.

Heat enough corn oil to cover potato skins on medium-high. Add potato skins and fry for 7-8 minutes or until golden brown. Set aside.

In a blender or food processor, purée the roasted red peppers with extra virgin olive oil, apple cider vinegar, a pinch of minced garlic, and a pinch of salt.

Spoon some of this sauce over the veggies and toss with a pinch each of salt, cumin, coriander, cayenne and black pepper.

Toss the crispy potato skins in the veggies until well coated.

Serve with a generous handful of chopped fresh cilantro and an extra drizzle of the red pepper sauce.

5 ways you can welcome refugees

We stand for a world that recognizes, welcomes and supports all refugees, on World Refugee Day (June 20) and every day.

Explore how you can help welcome refugees on World Refugee Day 2022 and beyond.