A refugee chef shares her story—and her eggplant curry recipe

Shanthini Sivakumar’s recipes, featured in the new cookbook The Kitchen Without Borders, bring the flavors of Sri Lanka to America.

Since 2015, Eat Offbeat has employed immigrants and refugees from around the world to prepare homestyle meals evoking their native cuisines—to the delight of New York City foodies. The meal delivery and catering company was established by 35-year-old Manal Kahi after she moved to the United States from Lebanon and found herself on a quest to find hummus that could rival her grandmother’s.

Now Eat Offbeat has gathered the best of its recipes into a cookbook, The Kitchen Without Borders, featuring dishes from Syria to Venezuela. For every cookbook copy sold, a donation* will be made to support the International Rescue Committee. The IRC has played a key role in Eat Offbeat’s growth by referring resettled refugees to be hired by the company.

Among the contributors to the new cookbook: Shanthini Sivakumar, a native of Sri Lanka, who began cooking only after she and her new husband were forced to flee their country because of civil war.

Chef Shanthini and her son, Sarujen, who manages Eat Offbeat’s delivery service and digital content, discuss their family story—and their favorite foods. As a special treat, Chef Shanthini has also agreed to share her celebrated recipe for fried eggplant curry. 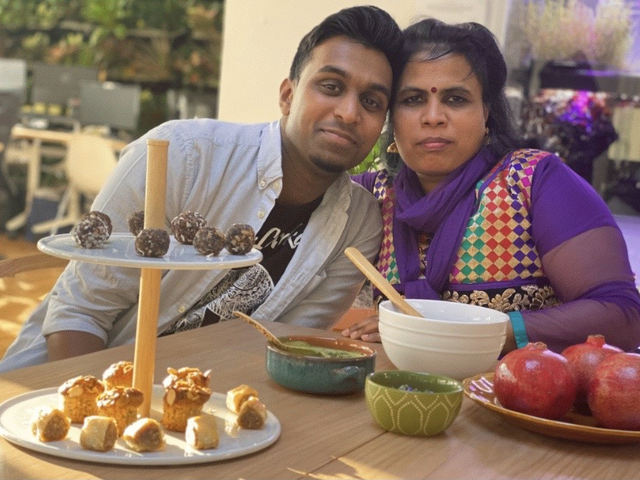 Chef Shanthini and Sarujen. The mother and son both work for Eat Offbeat.
Photo: Courtesy of Eat Offbeat

How did you learn how to cook?

Chef Shanthini: Shortly after I married, my husband and I were forced to flee Sri Lanka because of the war. We moved in with his brother in Lebanon. That’s who taught me to cook. Sarujen was born in Lebanon, but another war forced us to flee again, this time to Turkey, where I gained the confidence to cook on my own.

Because opportunities were scarce in Turkey, we applied for refugee resettlement. With the help of the IRC, we were able to move to the United States in 2013. That’s when I started cooking professionally, for a catering company in the Bronx, until the IRC connected me with Eat Offbeat. 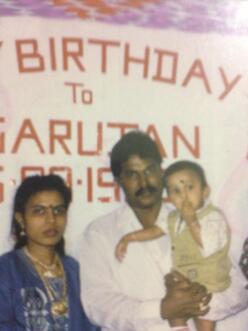 Sarujen and his parents, Shanthini and Sivakumar, at Sarujen's birthday party in Lebanon.
Photo: Courtesy of Sarujen Sivakumar

What’s special about your jobs at Eat Offbeat?

Chef Shanthini: When I used to work at a restaurant, I had to follow a recipe and it was mostly American food, very different from what I cooked at home. Now I get to cook my own food.

Sarujen: Everyone that's working here came to this country in a similar way: we’re immigrants and refugees. Everybody's learning English. Our favorite thing about Eat Offbeat is just talking to our co-workers, and learning their languages and their food.

What is your favorite dish?

Chef Shanthini: Chicken biryani is my favorite dish to cook. With lots of veggies mixed in with the rice, you get all these flavors in one bite. It’s delicious.

If you could choose one dish to become more popular in America, what would it be?

Chef Shanthini: Dosas! I don’t see these in a lot of Indian or Sri Lankan restaurants here. It’s very disappointing to me because it’s such a well known dish in our country. I think if more people here tried it, they could understand our culture more. 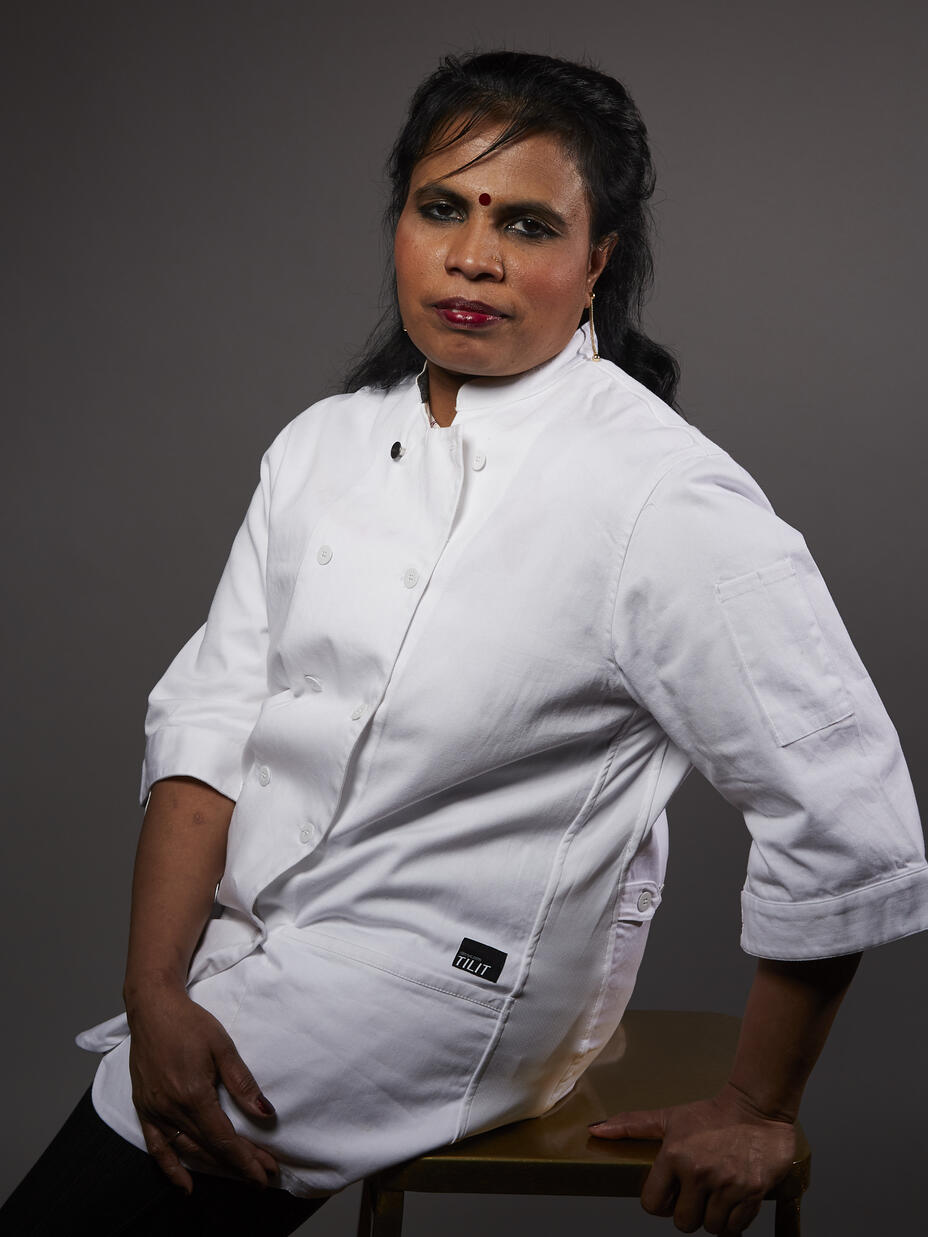 "When I used to work at a restaurant, I had to follow a recipe and it was mostly American food, very different from what I cooked at home. Now I get to cook my own food," says Chef Shanthini.
Photo: The Kitchen Without Borders by The Eat Offbeat Chefs. Photographs by Penny De Los Santos. Workman Publishing © 2021

What are your favorite parts of living in New York City?

Sarujen: My first day here, I realized right away how diverse the city is. Everybody has their own neighborhood; there’s space for so many different restaurants, food, faces and people.

Chef Shanthini: It was my childhood dream to go to the United States. I heard a lot about it growing up. So when I finally arrived, it was very satisfying to see everything for myself.

Have you learned about other types of cooking at Eat  Offbeat?

Chef Shanthini: Yes, the other chefs are from all over the world and we all have to learn each other’s dishes. My favorite so far is chicken cilantro created by Chef Mariama from Senegal. 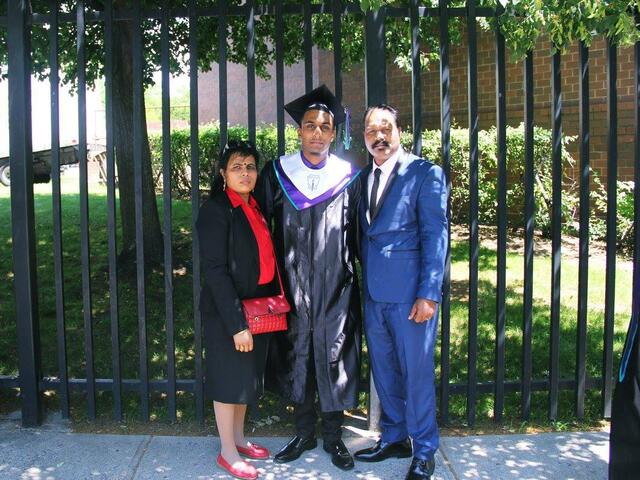 Sarujen and his parents, Shanthini and Sivakumar, at his high school graduation.
Photo: Courtesy of Sarujen Sivakumar

Sarujen: Some easy things. I’ve helped at work sometimes with my mom giving me directions over the phone.

How does it feel to be in the cookbook?

Sarujen:  It’s very moving to see the things we eat at home, as a family, in the book. 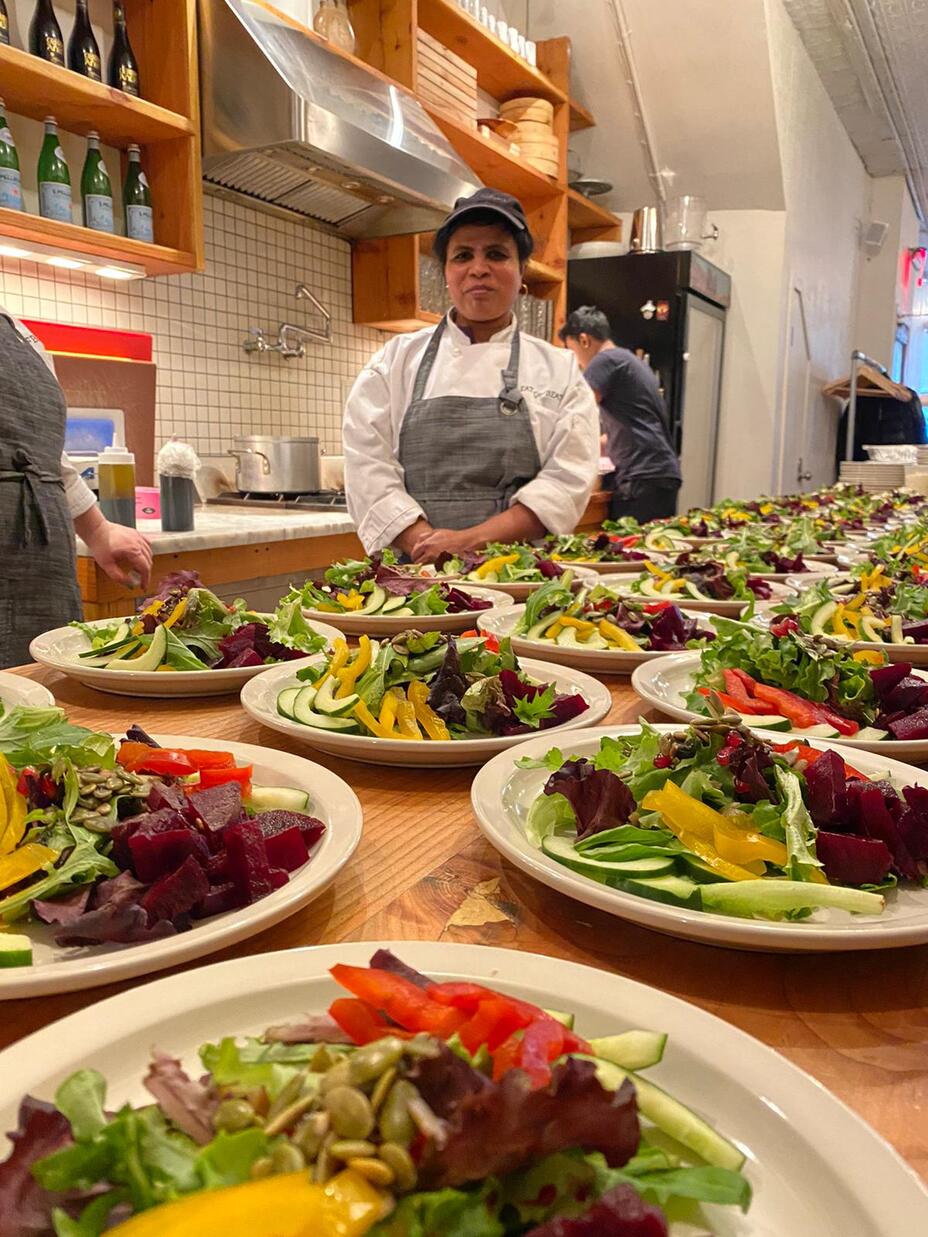 Chef Shanthini has learned to cook dishes from all over the world while working with other Eat Offbeat chefs.
Photo: Courtesy of Eat Offbeat

This eggplant curry is a crowd favorite at Eat Offbeat. The eggplant slices need to sweat a bit prior to frying, which helps them crisp up better. If you have extra hands in the kitchen, the two aspects of this dish could be made simultaneously. Like most curries, this is best served over fresh basmati rice. 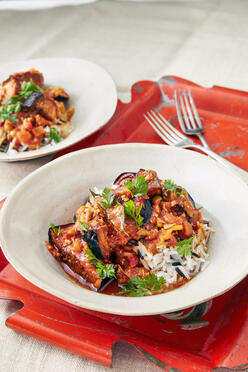 Photo: Excerpted from The Kitchen Without Borders: Recipes and Stories from Refugee and Immigrant Chefs by The Eat Offbeat Chefs. Photographs by Penny De Los Santos. Workman Publishing © 2021