South Sudan marked a decade of independence in 2021, but the country remains wracked by violence. Hunger is growing, driven by conflict, natural disasters—particularly flooding—and the economic impact of COVID-19.

As in any crisis, women and girls are often the ones who suffer the most. But in Jamjang, a remote area of northern South Sudan, women and men are working together for gender equality to help create a better life for everyone in their community. There, at a Women and Girls Safe Space run by the the International Rescue Committee (IRC), women gather and talk about their concerns, staff offer support for those who want to report gender-based violence, and men take classes on how they can better treat the women in their lives.

Go inside this work and see how it has transformed the lives of both women and men in the community. 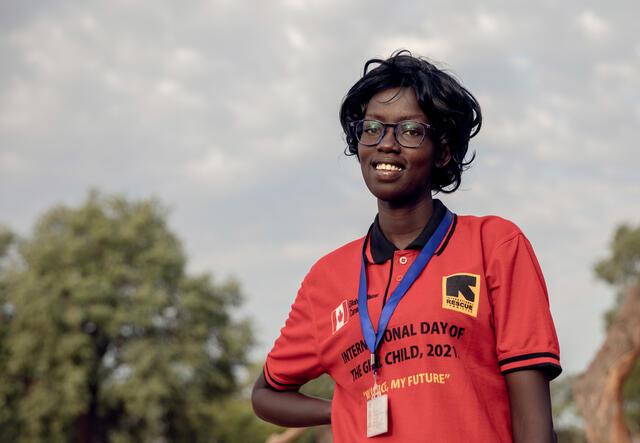 Tabetha, 33, is an IRC case manager at the Women and Girls Safe Space. Having once lived in a refugee camp in Kenya, she was inspired by her own trials to help her community in Jamjang.

“My past has been a struggle,” she says. “I have endured hardship. But I don’t want anyone else to have to endure this hardship.” 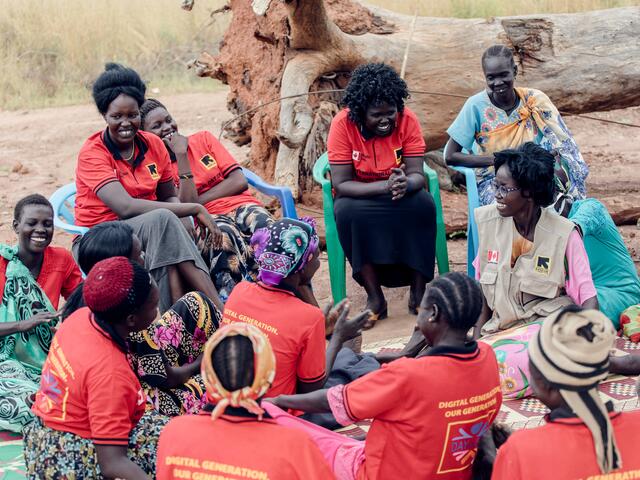 Tabetha runs “coffee, tea and talk” sessions where women gather at least once a week to talk about their concerns.

I want [women] to be aware of their rights. 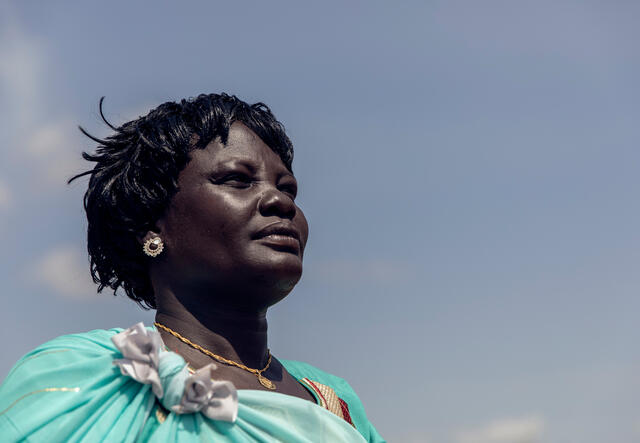 Nyanibioch Arop, 42, is a participant in the program. She says that some of the problems women face include struggles to find food and the inability to have their voices heard. 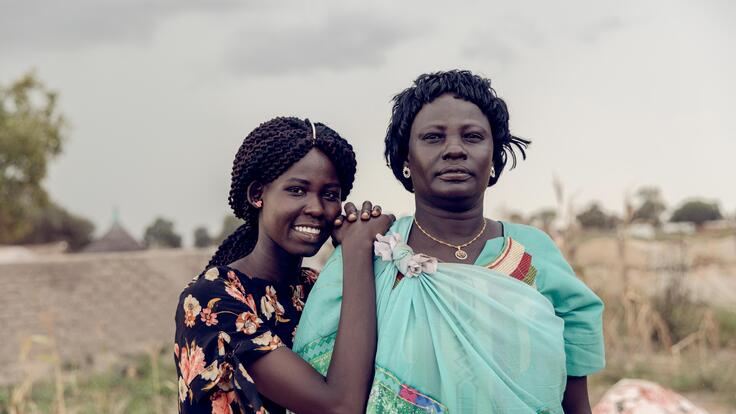 Nyanibioch believes men and women need to have equal rights so that women don’t have to depend on men for their livelihoods. Her daughter, Nyaboj, has recently finished her studies in the capital city, Juba.

When you let a girl go to school …there is a lot to be gained.

“What I have realized is, when you let a girl go to school …there is a lot to be gained,” says Nyanibioch. “A woman who perseveres, who works hard, can earn a little something for themselves. She can support her child alongside her husband, both contributing.” 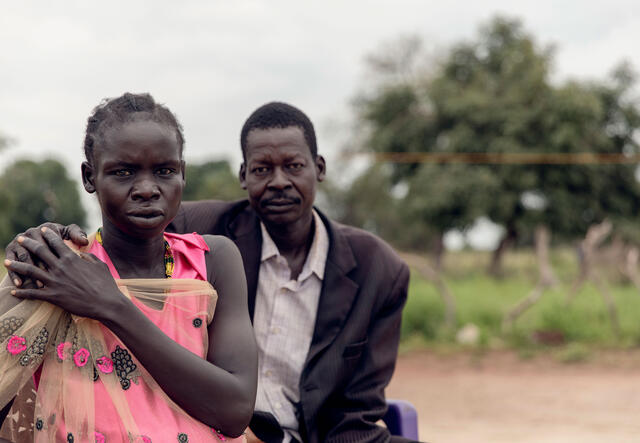 Riak Thon, 39, has participated in IRC sessions where he learned about women’s rights and why running a household isn’t solely “women’s work.” He shares household duties with his wife, Nyathon.

Your life should involve you and your wife sharing tasks. It is a way of living in harmony.

“I’m happy to embrace new things as a husband,” he says. “I will cook or fetch water. If I see that she’s tired doing housework, I’ll take over. Your life should involve you and your wife sharing tasks. It is a way of living in harmony.” 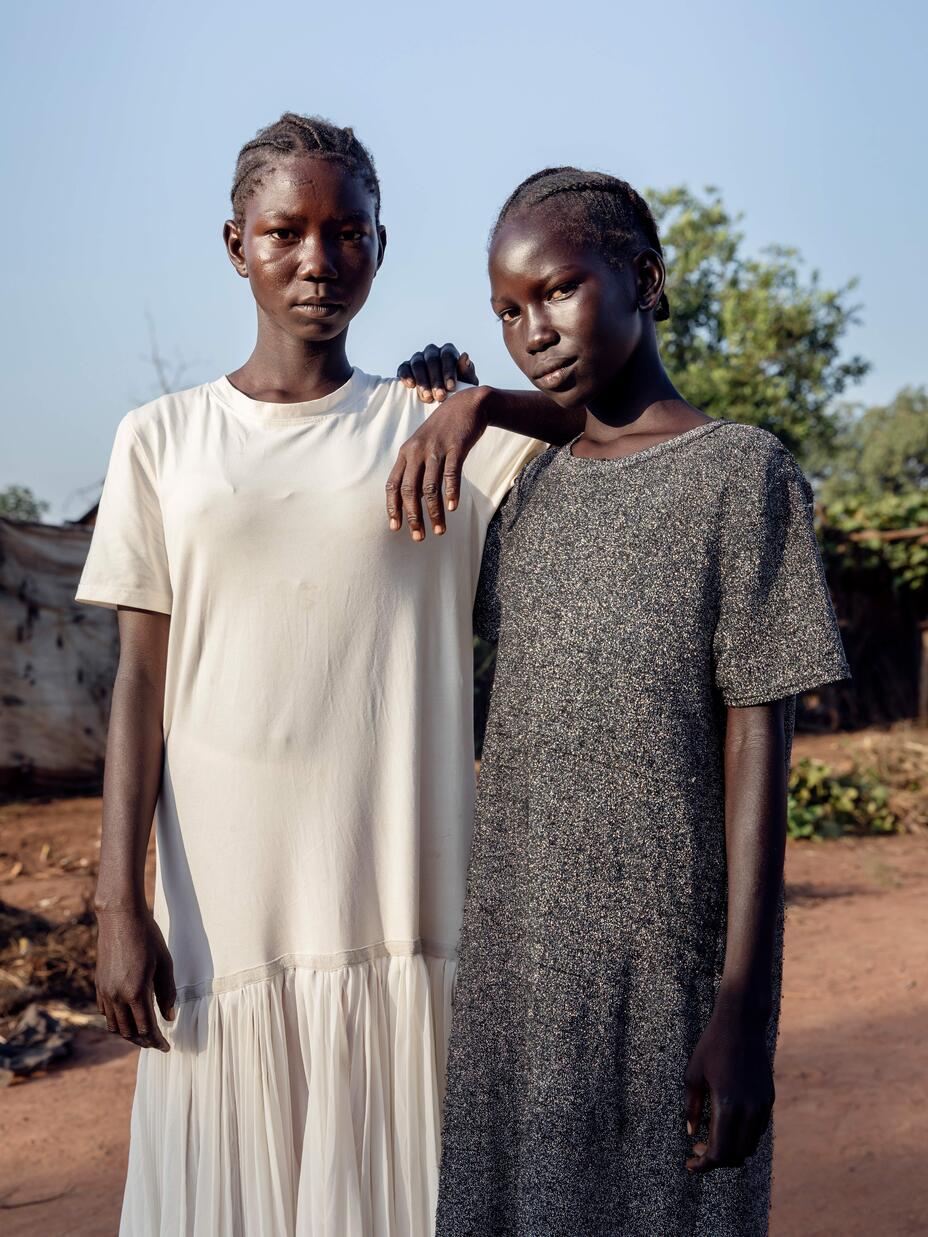 The IRC supports safe spaces throughout South Sudan. They all serve both the local community and more recent arrivals, women who have been displaced by violence in other parts of the country.

Muna, age 10, and her older sister Kumis fled their home in the Nuba mountains in 2016. Today, they attend the IRC’s classes on how to prevent gender-based violence, which tends to spike during times of crisis.

The important thing is to live together and help each other.

“The important thing is to live together and help each other,” says Muna. 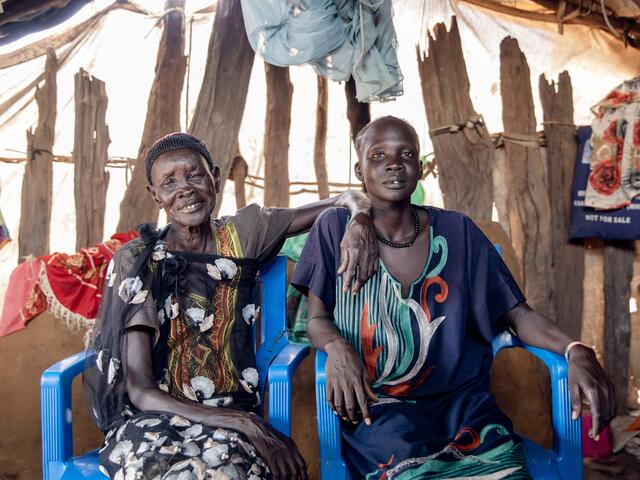 As in other parts of South Sudan, access to food and water remains a concern for many women who visit the Women and Girls Safe Space. Over 60 percent of the country’s population faced crisis or worse levels of food insecurity in 2021, and 100,000 faced catastrophic levels of hunger.

“Life here is tough and if you do not have people supporting you, it becomes unbearable,” says Veronica, 31. She is pictured above with her mother, Amou Makuei, whom she credits with helping her survive.

If we are given hope, then we can sustain ourselves.

“There are so many difficulties for women, if a household is struggling, a girl like my daughter can be married off and go and live elsewhere. Women need something to empower us. If we are given hope, then we can sustain ourselves.” 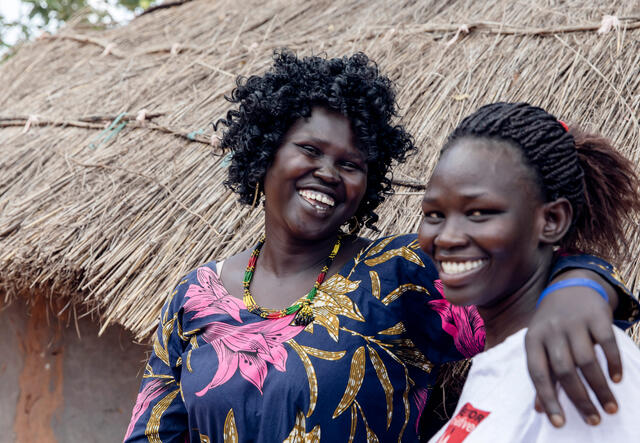 With the help of the IRC, some of the women have supported their families through their own small businesses. Nyanlou, age 33, now sells food in the local market. Here she poses with her best friend, 31-year-old Akon.

The most important thing is women helping other women.

“The most important thing is women helping other women,” Nyanlou says. “A strong woman is an educated woman. I want my children’s lives to be different: for them to go and get training, that will change their lives.” 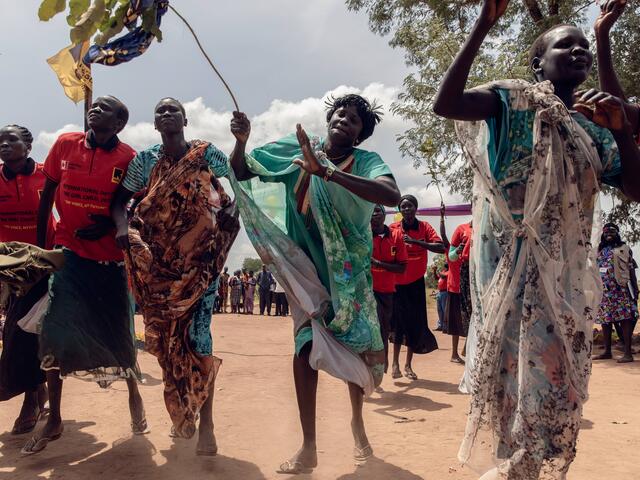 Many of both the women and men are hopeful the future will be brighter. Above, women dance to celebrate International Day of the Girl.

“If I have a daughter in the future,” says Tabetha. “I want her to grow up in a world in which equality is improved.” 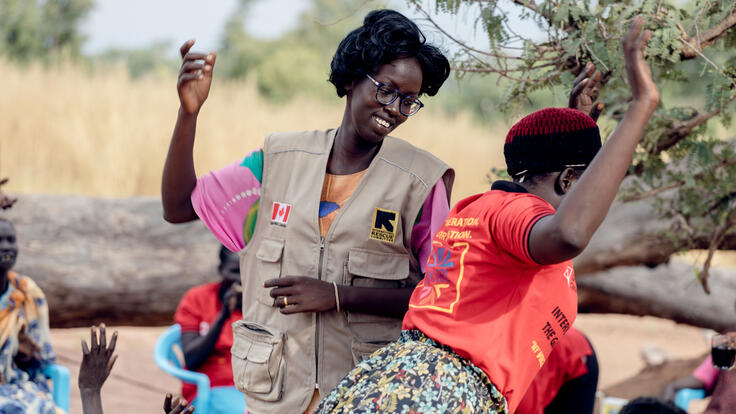 “I have been motivated through my interaction with the women. My role models have been the ones with initiative,” she continues. “Change will be brought about not by me alone, but by all of them. It starts with me, then it spreads to them.”

The Women and Girls Safe Space in Jamjang is supported with funds from Global Affairs Canada.