Fredrick Shema has always been motivated to give back to the community. But after George Floyd was killed and Black Lives Matter protests grew across the country in the summer of 2020, he knew he wanted to do more.

In the summer of 2020, Fredrick Shema, 23, found himself moved by the Black Lives Matter protests that erupted throughout the United States and the world. Already a leader in his community, he knew he wanted to be a part of the growing movement.

Born in Rwanda, Fredrick spent much of his childhood in a refugee camp in Uganda. His family was forced to flee their home country in 1994 because of the Rwandan genocide; they remained in the camp until they were accepted for resettlement in Boise, Idaho, in 2012. Today, Fredrick dedicates himself to helping young people of similar backgrounds thrive in the United States, primarily through his job as a youth success specialist for the International Rescue Committee in Boise, while working toward becoming a lawyer in order to change unjust policies.

It was this sense of justice that drew Fredrick to the Black Lives Matter movement. Well acquainted with racism as a Black man and a refugee who had fled genocide, he felt invigorated by the demonstrations he attended. He would soon join IRC colleagues in Boise to launch a series of public seminars on racial justice in humanitarian work.

Below, Fredrick talks to the IRC about his work with the refugee community in Boise, his perspective on the Black Lives Matter movement, and his hopes for the country in 2021.

Fredrick Shema works as a youth success specialist for the IRC. He hopes to eventually become a lawyer in order to change unjust policies.
Photo: Jonathan McBride/IRC

What is your job for the IRC and how has it changed during COVID-19?

As a youth success specialist, I work with families when they first arrive to make a plan to get their kids in school, then follow up to see how they are doing. Often I’m helping families sign up for things like school lunches or after-school activities and advocating for resources such as bikes for transportation and technology—things that I know people who've gone through the same path as myself really struggle with.

I speak five different languages so I also do interpreting. It’s a big plus for the families; you can see their eyes light up when they see I speak their language. They feel like I’m someone they can trust and that they can talk to.

During COVID-19, technology and digital literacy have been big issues. Most of the students have never experienced having computers and WiFi. I know it’s something I really struggled with when I first moved here to Boise. 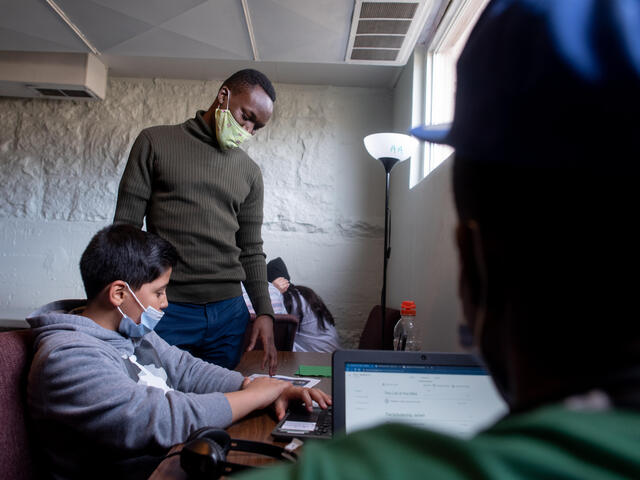 We made videos for these students with basic instructions: how to turn on the computer, how to send an email, how to check your Google Classroom—things that will help them connect to their school. Following COVID-19 protocols, we also created an after-school program where they can get help with their homework or with using technology.

Students are stressed right now, just like adults. There’s a family of seven that I work with closely. The oldest kids, who are in high school, have to wake up early in the morning in order to help their younger siblings get access to online materials and do their homework. Then, on top of that, they have to do their own homework. So the kids are really, really, really tired as well.

How did the Racial Justice in Humanitarian Work seminars come about?

2020 was a very difficult year for everyone. There were a few killings of people of color and it got to a boiling point after the passing of George Floyd. That's when the IRC in Boise reacted. We created a safe space where people of color could just come in and talk. It turned into something really special as we continued to meet weekly.

The sessions now include a look into global histories, community panels, and personal reflections. They’re also open not only to the IRC’s Boise staff but also other people who work with the refugee community, such as other resettlement agencies, the school district and even the police department.

Obviously, we’re talking about something that’s very personal for me. It was a bit of an overwhelming time—I’m studying for the LSAT (Law School Admission Test)—but I jumped at the chance to participate. I co-hosted the first event, which was focused on trauma: it covered tools to take care of yourself, how to recognize trauma in refugee and immigrant communities, how to help people experiencing it and how trauma informs our place in society and understanding of race.

What did you learn from putting on the event?

One thing I learned was how powerful my voice is. Not even just me but anyone who is able and willing to take up the space and be able to speak up. As resettled refugees and [newly arrived] refugees in the community, we have a lot to share. We have more to give. And the event proved that. 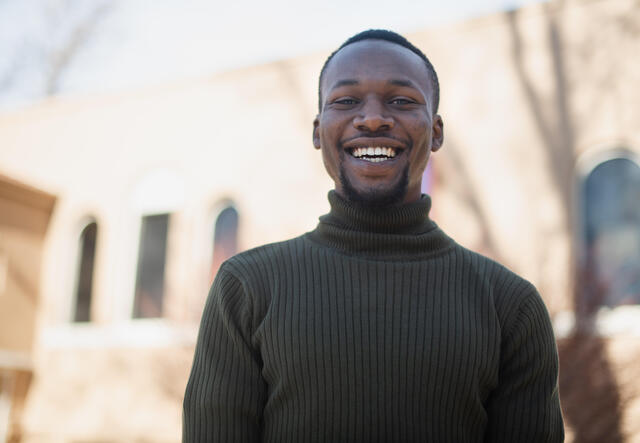 "As former refugees and [newly arrived] refugees in the community, we have a lot to share," Fredrick says.
Photo: Jonathan McBride/IRC

What do you think other people took away from the seminar?

We know not everyone is aware of what refugees have endured or has had these discussions around race. We were mainly talking about trauma, what sort of things could trigger some refugees and how they react to it.

The police officer who came, for instance, works closely with refugees in the community. And it’s important for her and other people who work with these families to know how to avoid triggering them. It’s also important to know that sometimes reactions may differ across societies. I definitely know how people react to some things in American society is different than how they react to it within African societies.

What inspired you to get more involved with racial justice work?

You know, Idaho is not as diverse as some other states. I’ve seen people who have the same skin color as myself harassed and discriminated against. I figure that tomorrow it could be me, it could be my brother, my sister, or anyone in my community.

It felt almost like it gave me superpowers to be able to say, 'Hey, I'm not the only one who's trying to fight for something that's right.'

I hadn’t been part of these movements until last summer. I went to a few of the protests here after the death of George Floyd. And just being there, seeing everyone come together: it definitely moved me. It felt almost like it gave me superpowers to be able to say, “Hey, I'm not the only one who's trying to fight for something that's right.” People across the country and world are doing it, too. I really have hope for the future: If we keep this up, we don't have to protest the same things. We can just learn from the past and do better.

On top of the IRC in Boise work, I also attend a weekly program for people of color that teaches about leadership and about the history of successful activists.

How do you think your background as a refugee influences your experience of racism?

That’s something I think about a lot. I've never been able to live where I call home, and just be comfortable. My family and I were kicked out of our home—Rwanda—and had to move to Uganda, where we didn’t speak the language and people could see we were different.

Then, coming to America, I really thought my life was complete. In Africa, the way you hear people talk about the United States...I thought it was an honor to come here. Then, I found out that racism in the U.S. is even worse than I thought. It’s very sad, to be honest, to experience that on a daily basis. 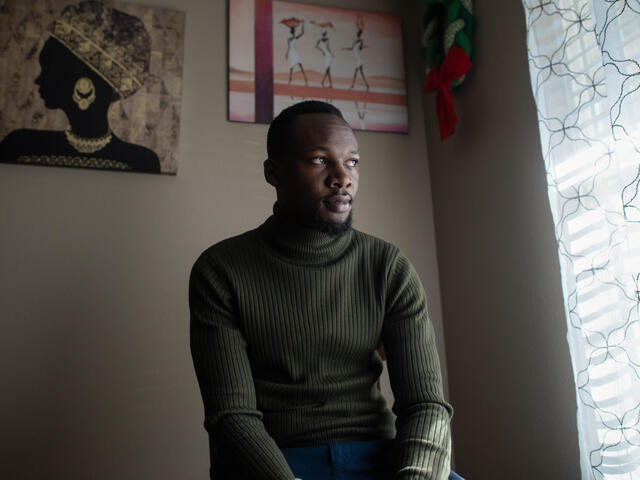 "It’s very sad, to be honest, to experience that on a daily basis," Fredrick says of racism in the U.S.
Photo: Jonathan McBride/IRC

I’ve tried to educate myself on how to deal with the police and on how to deal with racism. But it’s harder for people like my parents, who have not gotten the same opportunity to go to school and to educate themselves. And it's sad to see them go through it and be unable to speak up. It makes them feel like they are less of a human.

That’s why I strive every single day to speak up. And I encourage everyone to do the same. I do think it’s an exciting time for youth. We can all come together to say that we can no longer postpone justice.

To be honest, it was a bit of a nervous beginning to 2021. Again and again the families I work with would bring up the riots at the Capitol.

Most of them were really worried. They had experienced similar situations in their countries of origin and were afraid the past would repeat itself. There was so much fear. I did my best to share the information I had and, by the time I finished talking to them, I could tell they felt better. It was good for me, too, because, not to lie, I was nervous as well. 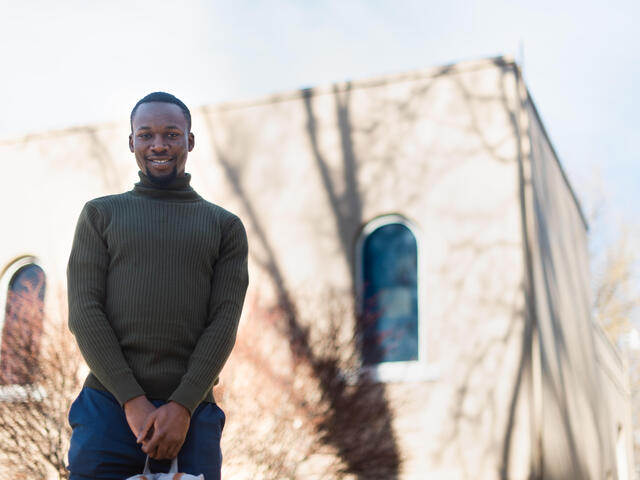 "It’s hard to fight when you’re not seeing change," Fredrick says. "But when you finally do, that gives you much more energy and more dedication to keep on going."
Photo: Jonathan McBride/IRC

It is exciting now to have an administration that has shown interest in supporting refugees and Black people, and that may implement policies to make refugees feel safer in the country that we now call home. Plus, seeing more refugees come in will definitely put a smile on my face.

It’s hard to fight when you’re not seeing change. But when you finally do, that gives you much more energy and more dedication to keep on going.

*The interview has been condensed and edited for clarity.