Saeed’s smile: ‘Disability should never be a reason for exclusion’

Aisha* and her 5-year-old son Saeed have experienced so much. Saeed’s father left them soon after the boy was born, leaving Aisha to raise Saeed by herself in the midst of the ongoing Syrian conflict. When airstrikes and shelling devastated her hometown, Aisha had no choice but to seek safety elsewhere. 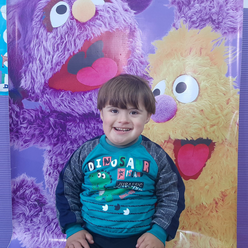 Saeed, 5, was displaced by the conflict in Syria.
Photo: IRC

“I was worried about Saeed because he was terrified of warplanes and the sound of bombing,” Aisha recalls. The child’s fear was exacerbated by circumstances beyond the conflict: Saeed was born with Down’s Syndrome, a genetic disorder associated with physical growth delays and mild to moderate intellectual disability.

Aisha managed to relocate to a safer city, coping with the normal stress and hardships, but adjusting to a new life was difficult for Saeed. Aisha had no access to the specialized care he needed, and the boy struggled to express himself properly and communicate with other children, leaving him isolated, sometimes bullied.

Aisha was determined to improve things for her son, knowing there had to be something better for Saeed. She learned about the IRC’s Ahlan Simsim program at her neighborhood’s early childhood center, a safe place for children to play, learn and regain a sense of normalcy.

Ahlan Simsim (Arabic for “Welcome Sesame”) is a partnership between the IRC and Sesame Workshop, the nonprofit educational organization behind the television series Sesame Street that seeks to support children affected by conflict in the Middle East by delivering early learning and nurturing care to children and caregivers. Through a TV show and in-person services featuring storybooks, educational materials, and caregiver programming, Ahlan Simsim reaches families wherever they are—from classrooms to health clinics to mobile devices—with vital educational resources and playful learning. 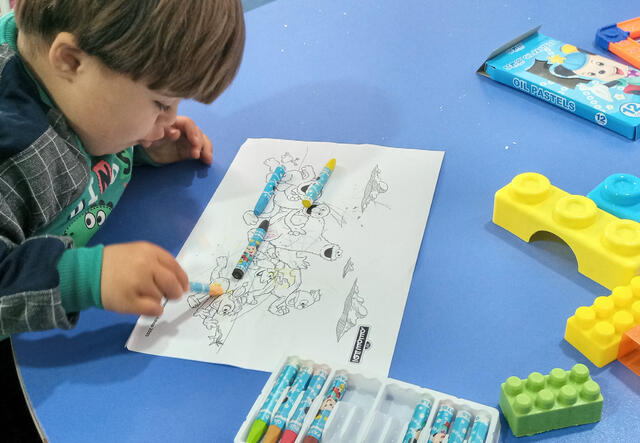 Since taking part in the IRC's Ahlan Simsim program, Saeed has became more attentive and playful, communicating in ways that his mother Aisha had never seen before.
Photo: IRC

The IRC early childhood center in Aisha’s neighborhood is one of the many such centers opened through the Ahlan Simsim project and features programs focusing on social and emotional learning and cognitive skills development, critical for young children’s healthy growth.

Still, Aisha was hesitant to enroll Saeed because of his challenges. Within the first few sessions, however, Saeed was sitting with his new friends and enjoying Ahlan Simsim videos and stories. He learned important hygiene habits like washing his hands and covering his mouth when sneezing or coughing, and how to practice stress-relieving techniques to manage his emotions.

The change was remarkable. As Saeed became more willing and eager to learn and engage with children his age, he began using spoken language and signing to express his emotions and his needs in a positive way. He also became more attentive and playful, communicating in ways that Aisha had never seen before.

A smile says it all

Aisha was not the only one who noticed the change in Saeed. The staff in the program noticed it, too—the boy’s infectious smile had a positive impact on everyone—and they embraced the opportunity to talk about notions such as empathy and compassion.

“Despite all the challenges Saeed is facing, he was able to teach us the power of kindness,” says Qasem, the IRC’s Ahlan Simsim program supervisor in northwest Syria. “Every time he would come to the center, he greeted the staff and the other children with a big smile on his face. All children deserve to be treated equally. Disability should never be a reason for exclusion.”

Despite all the challenges Saeed is facing, he was able to teach us the power of kindness.

Aisha also learned how to support her son’s growth. She enrolled herself in the Ahlan Simsim Parenting Program, where she practiced coping skills and various activities she can do with her son using materials easily found at home.

In northwest Syria, the IRC has been working with a network of 12 organizations to integrate early childhood development interventions into activities on health, education and protection while ensuring equal opportunities for all children regardless of their gender, disability, ethnicity, legal status or any other element. 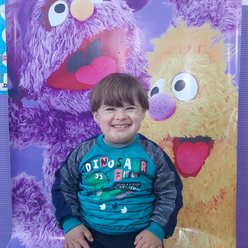 Aisha is proud of the progress Saeed has made.
Photo: IRC

In addition to Ahlan Simsim, Aisha is taking advantage of other IRC services, including for financial support, and has sought out specialized support for Saeed in the form of speech therapy, physical therapy and medical check-ups with IRC referrals. Now, Aisha looks to the future with excitement and pride. “I hope my child learns and goes to school like any other child,” she says. “I wish other children like Saeed keep receiving assistance and support.”

*Names and locations have been changed or omitted due to privacy concerns.

About the IRC and Ahlan Simsim

The IRC is proud to partner with Sesame Workshop. Our work together in Syria, Lebanon, Jordan and Iraq has changed the lives of millions of young children who have fled brutal conflict and who have lost the opportunity to learn in safe classrooms. We train staff on disability inclusion, create accessible physical spaces, and provide activities and materials tailored to the abilities and needs of all children.

We're proud to join our partners @SesameWorkshop in welcoming our new friend Ameera to the neighborhood!

This witty & inquisitive Muppet will star in @AhlanSimsim—part of our larger partnership with @sesamestreet—to bring hope to children with disabilities affected by crises. pic.twitter.com/hp3CulO5J5

Ahlan Simsim videos, for example, feature familiar faces of Elmo, Cookie Monster and Grover, plus two new Muppet friends named Basma and Jad, and pals like a mischievous baby goat named Ma’zooza who eats everything in sight. Designed in close collaboration with local producers, creatives, and early childhood development experts, each Ahlan Simsim episode features a comedic story segment during which Basma and Jad experience emotions in situations relatable to young children, like fear of the dark during a movie night or frustration when friends don’t play by the rules of a game.

Welcome to the neighborhood, Ameera! We're thrilled for the world to meet our newest friend. pic.twitter.com/cRAnMLiWgA

To further support children with disabilities, Sesame Workshop recently introduced a new Muppet character, Ameera, to Ahlan Simsim. Ameera loves science and gets around in a wheelchair. The magic of the Ahlan Simsim program is a powerful example of how media can augment hands-on instruction to impact children and caregivers.