Learn how the IRC and Sesame Workshop's partnership has provided early childhood development services for over 1 million children across the region.

For almost five years, the International Rescue Committee and Sesame Workshop—the nonprofit, educational organization behind Sesame Street—have been working to give children affected by conflict and crisis in the Middle East the support they need to learn, grow and thrive.

Children are among the most at risk when a crisis strikes.

Conflict and crisis have impacted the lives of more than 79 million people across the region, 35 million of whom are children. Studies have shown children are among the most at risk when a crisis strikes: exposure to ongoing violence and chaos can leave young children vulnerable to toxic stress and developmental delays.

That’s where the IRC and Sesame Workshop come in.

In 2018, they joined forces to create Ahlan Simsim, which means “Welcome Sesame” in Arabic. This innovative approach features an all-new Arabic-language TV show (also called Ahlan Simsim) from Sesame Workshop, which has reached 23 million children across the Middle East and North Africa. This mass media component, paired with early childhood development services and programs created and delivered by the IRC in collaboration with local partners and government agencies, provides holistic support for children, involving the important people in their lives, including caregivers, teachers and health service providers. 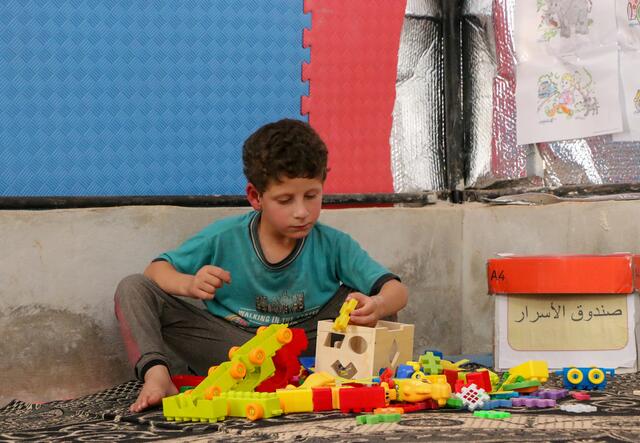 Conflict and crisis have impacted the lives of more than 35 million children in the Middle East, including Tamer, 7, whose family was displaced from their home in Syria.
Photo: Mohammad Awad

As of November 2022, Ahlan Simsim has reached over 1.46 million children and their caregivers with direct services in Jordan, Lebanon, Iraq and Syria, restoring hope and opportunity for a generation.

Meet some of them:

Currently, there are 1.5 million Syrian refugees living in Lebanon, a country mired in economic and political crisis and where 82% of families now live below the poverty line. Yara*, a shy young Syrian girl, is one of those refugees.

In Lebanon, 82% of families now live below the poverty line.

In November 2021, when Yara was 3 years old, her mother, Dima, enrolled her in Ahlan Simsim’s preschool program. As the COVID-19 pandemic shuttered schools and centers, the program switched to phone calls and WhatsApp to continue providing children with literacy, numeracy and emotional-development skills. Caregivers like Dima were guided through activities with their children through calls and messages. Together Yara and Dima learned and played at home; Dima was amazed at Yara’s cognitive development.

While remote learning solutions have addressed critical developmental needs of children staying home during the pandemic, they can’t provide the same care and socialization of in-person programs. Yara, too, was affected by isolation: “My daughter was suffering from a lack of social skills,” Dima tells the IRC. “Being isolated during COVID had a significant effect on her personality.” 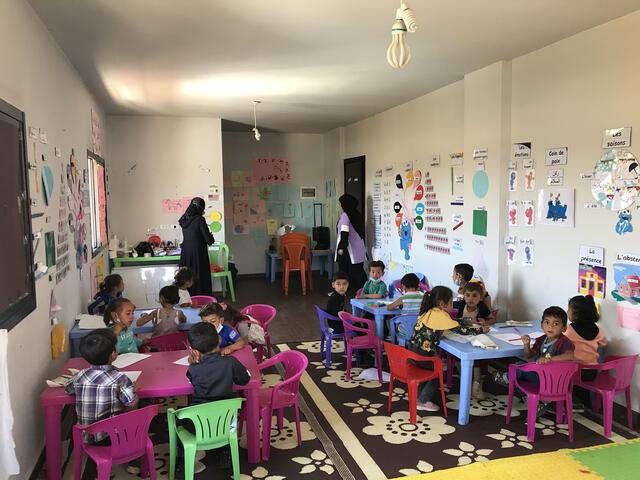 These preschoolers in an IRC "healing classroom" in Lebanon are taking part in the Ahlan Simsim program, which addresses the toxic stress and developmental delays children affected by conflict and crisis may experience.
Photo: Elias El Beam

When Yara was able once again to attend programs in person at the local early childhood development center, IRC teachers recognized her difficulties and worked to make her feel comfortable. Five months later, Dima saw a tremendous difference in her daughter. “Yara gained self-confidence and learned how to socialize,” she says. “She knows what she wants and expresses her emotions and needs clearly…. We got so much more than we expected. Her emotional and mental health is much better. The program balanced emotional health with learning and made Yara mentally prepared for school.”

According to Aliya, Yara’s teacher at the center, “Yara transformed into a social butterfly! The transition to public school was smooth. I am so happy about Yara’s holistic improvements.”

Ziad Mohammad always knew he wanted to be a teacher, a profession he saw as crucial to raising the next generation growing up with the impacts of conflict and climate change. Now a father himself, Ziad knows both as a parent and an instructor the importance of early education opportunities—especially for those impacted by conflict and displacement, like his own family.

In Iraq, just 3% of children have access to any kind of preschool experience.

In Iraq, less than 3% of children have access to any kind of preschool experience. Recognizing that a child’s early years often dictate their later academic performance, the IRC and the ministry of education in Iraq partnered to develop a school readiness program for incoming first graders. The program uses playful characters from the Ahlan Simsim TV show to teach essential lessons, incorporates collaborative activities aimed to enhance children’s social and emotional growth, and offers training and resources for teachers. This support helps children who missed out on preschool make the transition to the classroom more easily. 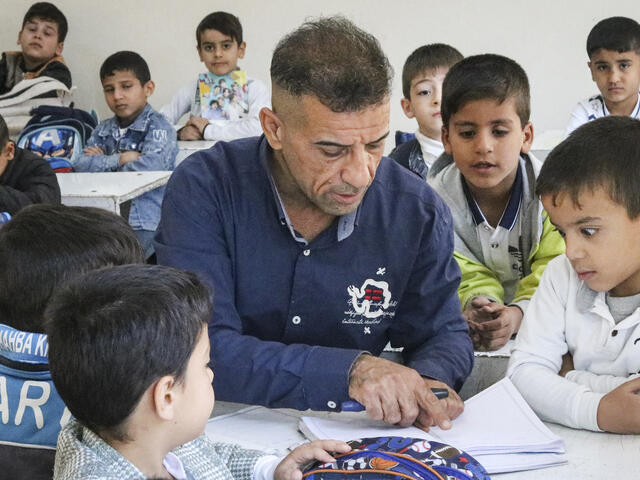 Ziad Mohammad always knew he wanted to be a teacher. Now, as an instructor for the Ahlan Simsim program in Mosul, he helps Iraqi children access early education opportunities and learn essential lessons for growth.
Photo: Ahmed Abdulsalam

Ziad immediately saw the program’s potential for impact. “One of the children kept pulling on his mother’s skirt and refused to leave her,” Ziad says. “[We] noticed a change when we implemented the activities on the first day. He started paying attention to the songs, engaged with physical activities, and his mother even reported he is singing the songs at home.”

Since the program was debuted in the Ninewa province in Iraq in 2021, it has expanded to 1,800 schools all across the country. The education ministry is planning to continue expansion through 2023 and beyond. “Expanding the school readiness program is imperative,” says Dr. Hadeel Alazawi, head of curriculum development. She is excited “about the prospect of equal access to learning opportunities and bridging the knowledge gap for the first three grades.”

By March 2022, the war in Syria had displaced 6.9 million people inside their own country. Among them was Tamer, a 7-year-old boy born with brain atrophy. Two of his three siblings also had disabilities.

Tamer’s father, Hamed, told the IRC about the challenges he faced caring for his children: “I am like thousands of displaced people in camps, but what I struggle to accept is that three of my children are disabled and unable to walk.”

Fortunately, Hamed then discovered Ahlan Simsim when the program was implemented at a center run by the IRC’s local partner organization, WATAN. At first, Tamer struggled to remain calm when father left him at the center, but program facilitators understood the boy’s distress and responded with patience and care. They tailored programming to his needs, modifying activities and encouraging him to participate alongside his peers. After a few sessions, Tamer began nodding his head and waving his hands happily with the other children while listening to Ahlan Simsim songs. 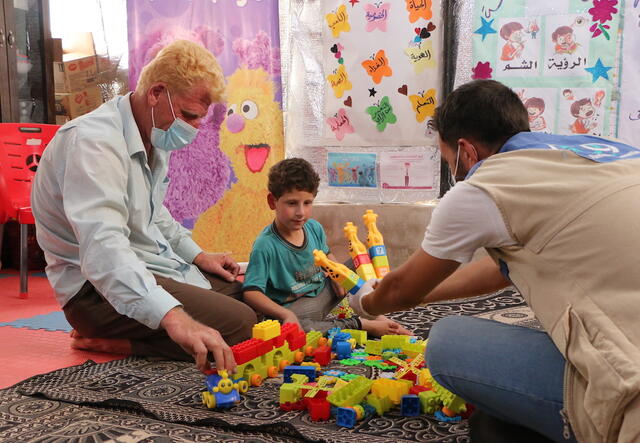 Tamer, a 7-year-old Syrian boy born with brain atrophy, and his father, Hamed, received tailored support from the Ahlan Simsim program at a center run by the IRC’s local partner organization, WATAN. “I can see the happiness that lies beyond his smile whenever we get ready to go to the center,” Hamed says of his son. “Thank you for this wonderful feeling.”
Photo: Mohammad Awad

The IRC team also provided Hamed and his wife, Mariam, with lessons in caregiving focused on supporting their children’s development and growth at home, and on methods to manage their stress, develop patience, and better communicate with their children and themselves. The team also referred the family to specialized services for children with brain atrophy-related disabilities.

Now Hamed says of his son, “I can see the happiness that lies beyond his smile whenever we get ready to go to the center. Thank you for this wonderful feeling.”

In Syria alone, we have reached over 280,000 children and caregivers through Ahlan Simsim programs.

WATAN is one of 60 partners across the region that the IRC engages with through Ahlan Simsim. In Syria alone, we have reached over 280,000 children and caregivers through Ahlan Simsim programs. We emphasize inclusion in all our collaborations, from the design of facilities (for physical accessibility) to the training of facilitators, to the positive representation of children with disabilities throughout content and materials. To challenge stereotypes and reflect children's lived experiences on-screen, Sesame Workshop introduced a new Muppet, Ameera, to the Ahlan Simsim TV show. A witty, inquisitive 8-year-old girl with a passion for science and basketball, Ameera uses a wheelchair or forearm crutches due to a spinal cord injury.

In 2022, Enas, a 47-year-old midwife and mother of two, became one of hundreds of medical service providers to begin integrating early childhood development into children’s check-ups at primary health clinics across Jordan.

Midwives in Jordan care for mothers and their children from pregnancy through age 5. To this day, despite that she has worked more than half her life at the demanding job, Enas says she draws immense joy from “engaging with mothers and their children and witnessing the growth and development of these children from birth.” She has drawn energy and inspiration from the new program, co-developed with the Jordan ministry of health, which was designed to ensure midwives are properly trained and equipped with the resources necessary to educate mothers on the best practices to help their children grow happily and healthily and meet key developmental milestones.

Among the tips the mothers learn is to avoid shouting—it's better to listen to children and make sure they feel comfortable and seen—and how to manage tantrums and other behavioral issues when they arise. 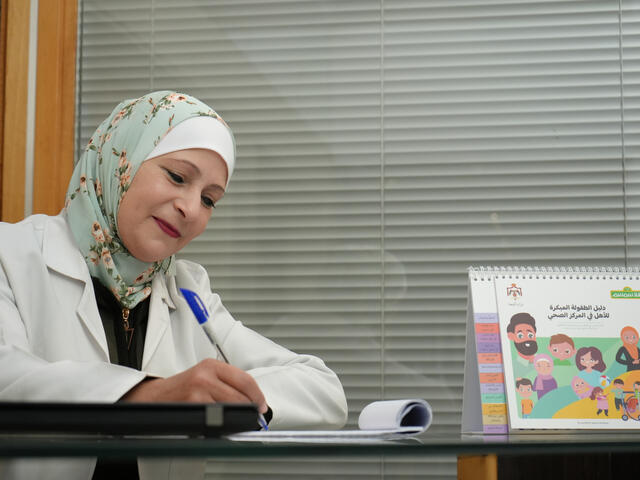 “The change starts with us [as midwives],” Enas says. “Before the training, I did not know how to answer questions related to helping a mother with her child’s behavior, and now I can answer with such great confidence. I wish I had these skills when my own children were young, because it helps change behaviors for the better.”

Around the world, the IRC collaborates with local partners and government agencies to strengthen early childhood care by promoting long-lasting, sustainable change. We have reached nearly 800,000 children through early childhood development programs with national partners and expect to reach millions in 2023 and beyond seeding hope and opportunity for a generation of children.

*Some names in this story have been omitted for privacy and safety reasons.