Separated from her children, Rosa gives back to other migrants

When Rosa’s youngest child, Emily, was just 7 years old, she developed a rare disease, a crippling form of juvenile osteoporosis and arthritis, that left her hospitalized for months. Emily’s condition only worsened as her doctors pursued therapies, but medications were limited in Puebla, Mexico, where they lived. If Emily was to get better, she’d need treatment in the United States.

Because of my story, I can say I understand what they’ve been through.

Luckily, Emily and her two siblings were born in the U.S. and their father still lived there. As citizens, they could join him and Emily could get help.

But Rosa had to stay behind in Puebla.

Today, as her daughter continues to struggle with chronic health problems, Rosa remains in Mexico. She has not lived in the same country as her children for nearly a decade. She has applied for visas intended specifically for foreigners to visit sick relatives, but she has not had success. Rosa eventually moved to Ciudad Juárez, a city on the U.S.-Mexico border, to be as close to her family as possible.

Ciudad Juárez is also where Rosa discovered her calling. Recognizing that there were thousands like her striving to cross the border—many of them asylum seekers fleeing violence and persecution—she decided she would devote her time away from her family to giving back.

Today, Rosa works as a social worker and manages an International Rescue Committee and International Organization for Migration-supported “triage hotel,” a shelter that allows asylum seekers and migrants to quarantine from COVID-19 while receiving social services. Below, she describes her journey and her work. 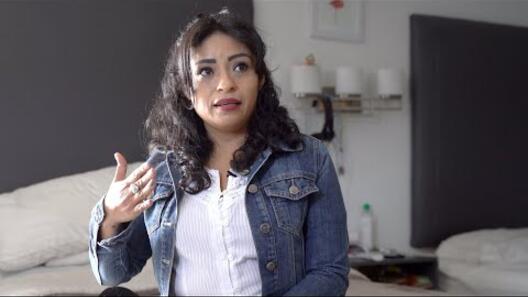 A calling to serve others

I’ve been very desperate, many times—many, many times.  I know what it’s like for your dreams to be completely crushed every time you apply for a permit and try to be with your family.

I always tried to hold on to my faith in God—I’m a woman of faith—I believe that he called me to do this work. He reminded me that, above all, there were many people at the border that were going through what I had been through.

You know, sometimes you say, “God told me.” And people will say, “Did he send you a WhatsApp? An email? How did he tell you?”

For me, it happened three years ago when Emily had to have surgery on her hip, a very complicated surgery. I applied to be with her but I was denied. I was desperate. I said, “take me in shackles, escort me, do what you have to do but I want to be with my daughter. She needs her mom.”

Rosa shows a photo of her daughter. The mother-of-three has not lived in the same country as her children for nearly a decade.
Photo: Paul Ratje/IRC

I tried Tecate, Tijuana, Baja California and Rosarito, but God closed all the doors for me. I was not able to go to the United States and instead came here, to Juarez.

Four months later, I met Pastor Alfonso Murguía, a representative for the World Peace Organization in Chihuahua who works with migrants at the border. I started working alongside him, and that opened up this enormous opportunity to work within my own community.

Because of my story, I can say I understand what they’ve been through. Not because they told me about it but because I’ve also lived it.

Nobody knew what would happen when COVID-19 hit. At one point, I found myself in my apartment saying to myself, “What am I going to do here alone for so many months?”

Then, while in a meeting with several humanitarian agencies, I was asked to work at the triage hotel. We were not only in the middle of a pandemic, we were in a border city and people were going to keep coming. I said that if I commit, I commit 100 percent, and I’ll go live there and I’ll take care of the place and I’ll be present, dedicated in body, soul, everything.

We had to create everything from scratch. In the beginning, I was there until three in the morning because I was the only one doing administrative work. 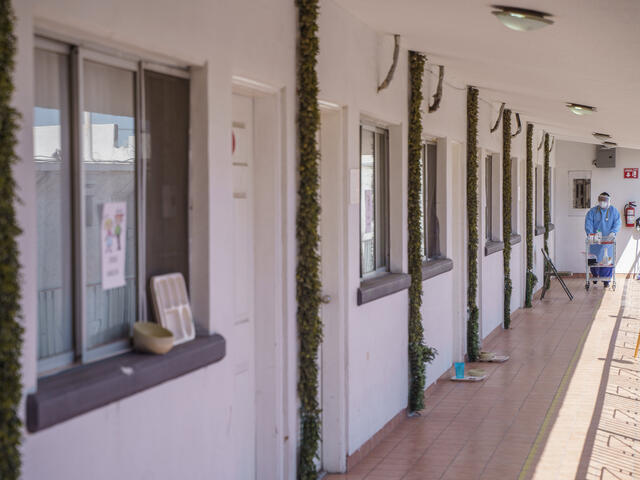 The IRC and International Organization of Migration-supported triage hotel that Rosa manages. The hotel allows migrants to quarantine for 14 days while offering mental health and legal support, food, medical check-ups and recreational activities for the children.
Photo: Paul Ratje/IRC

Today, the triage hotel allows migrants to quarantine for 14 days. During that time, we offer mental health and legal support, food, medical check-ups and recreational activities for the children.

The team has learned how to take care of each other. I think this has a lot to do with the fellowship that they have, because at the end of the day, we’re migrants serving migrants.

One day, I said to God, “You made me a mother and you took away my children.” And he answered, “I’m taking care of yours, you take care of mine.”

Each room has a story

My children have been able to visit me here. Emily loves giving out donations. And one of the clearest memories I have from this year is of my son, Ivan, handing out platters of food in February in the snow. It made me feel like the proudest mother because all of my kids did the work with so much love.

Each room in the hotel has a story. There was one woman I consider my daughter. She had been kidnapped by a cartel for one year and eight months. She ended up becoming part of the staff, and I saw the way she flourished. Seeing her handing out food with a smile from ear to ear was indescribable. She still calls me and says “How are you, mom?”

One day, I said to God, “You made me a mother and you took away my children.” And he answered, “I’m taking care of yours, you take care of mine.” 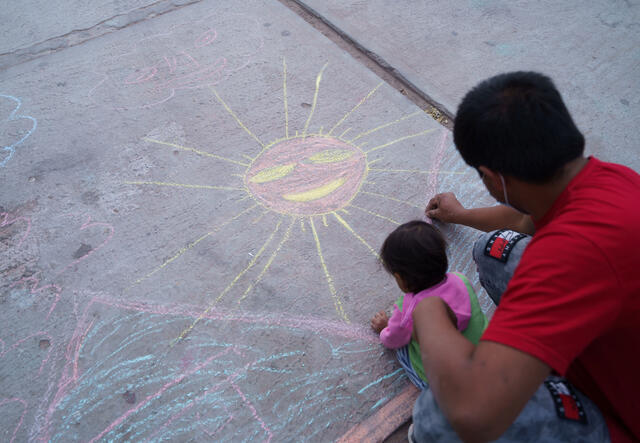 A parent and child draw with chalk at the triage hotel. For Rosa and her entire team, it is very important that children and their families find well-being. Every day they have different activities, including art sessions where they can express their creativity.
Photo: Paul Ratje

The challenges and dangers are constant

As a migrant I know perfectly well that when we leave the comfort of our homes, we don’t do it because we want to. The challenges and the dangers are constant.  People are taken advantage of. They’re deceived, they experience every type of abuse—financial, physical, psychological.

Everyone comes here with a dream. Unfortunately not everyone is blessed with a happy story.

To be exposed, to suffer, no one chooses that.

I’ve seen many people leave here incomplete—they lost a leg or hand on their journey. They return to their country mutilated, not only their bodies, but also their souls. I know of couples, only one returns because the other was lost along the route—they couldn’t even find their bodies in the desert.

To be exposed, to suffer, no one chooses that.

People are here [at the triage hotel] for a very short amount of time. The chances that they remember us are slim.  But I think we are a turning point. They arrive and many exclaim, “A bed!” They’ve never slept in a bed. Others say, “Hey, I’ve never eaten three meals, you’re making me fat.” 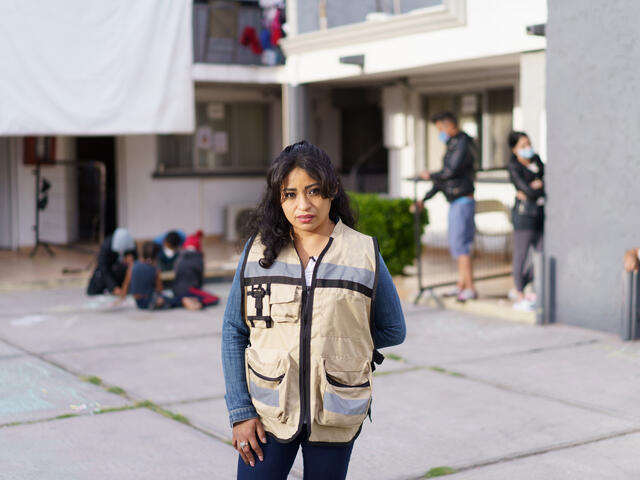 Rosa at the triage hotel. "Everyone comes here with a dream," she says. "Unfortunately not everyone is blessed with a happy story."
Photo: Paul Ratje/IRC

I have had a warm experience in Juárez. I think that’s part of the journey, you arrive at a place that everyone sees as a desert, but the possibility exists to see a beautiful sunrise.

That’s our goal—to leave mark, a good one, on each and every one of the people that pass through here.