Forced to close her resettlement office, she couldn't turn one last refugee away

Amy Longa has met many refugees, particularly children, who remind her of her own painful experience of displacement. “When I was a baby, my mom took refuge in Sudan after fleeing violence in Uganda,” she says. “There, we were uprooted three times and were forced to return to Uganda.”

Amy grew up amid war and scarcity. “I ran through gunshots,” she recalls. ‘I never had a bedroom or bed. I had to share a small amount of food with 20 other kids. I don’t recall wearing shoes going to school. My childhood was completely ripped from me and none of it was my choice.”

Amy Longa has been working with the International Rescue Committee in southwest Kansas for four years where, with the support of the local community, she helps refugees restart their lives and settle into their communities.
Photo: Courtesy of Amy Longa

Amy, 42, came to the United States in 2007 on an immigrant visa, became an American citizen, and began working with the International Rescue Committee. For the last four years, she ran the IRC’s resettlement office in Garden City in southwest Kansas where, with the support of the local community, the office resettled approximately 250 Burmese, Somali, Sudanese and Congolese refugees. For the first 90 days after refugees arrive to the U.S., resettlement agencies like the IRC help them restart their lives and settle into their communities.

“Without an office that provides specialized services to refugees and to the community, how’s integration going to happen?” Amy asks.

For Amy, her work with the IRC is not just a job, but “a humanitarian response from the heart.” Below, she shares her experience.

I celebrate every milestone.

A client comes to the office independently.

Yay, you made it on time for the appointment! You didn’t get lost!

We donate a bicycle and helmet to a father, who visits the office riding his bike.

Yes! You remembered to be safe and put on your helmet!

Someone comes to receive their work permit or social security card.

We can now set an appointment to complete your résumé and apply for a job! 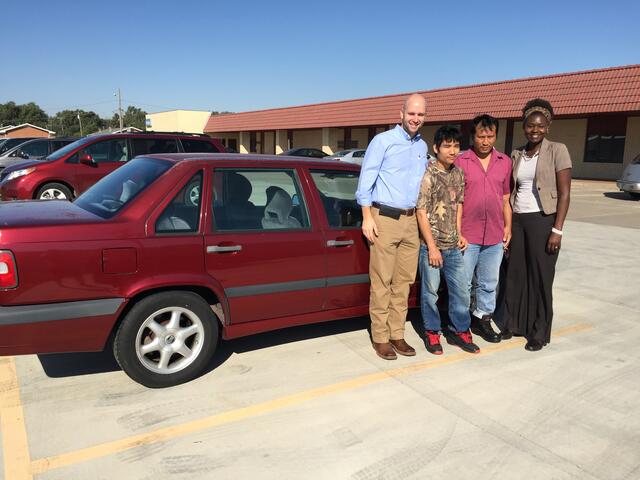 There was a [Sudanese] boy who came from Jordan. We took him grocery shopping, and the next day, he had to prepare his own breakfast. The day after, he came to the office and said, “Amy, I made my breakfast, I made breakfast for myself!” These are such small moments, but I truly believe they are the beginning of building that strong foundation to become a citizen five years down the road.

I’ll never forget when one of my clients received a job less than three weeks after arriving in the U.S. We were both very excited. His entry wage was $16.30, and in less than two months, he prepared a balanced budget.

“Why are you crying? I can talk now!”

I’ve built many strong relationships in the past four years. Nor Kamel is one of them. He’s 19 years old from Myanmar. He’s Rohingya Muslim, the world’s largest group of stateless people who have been brutally persecuted. He fled to Bangladesh, then Malaysia, and was resettled in Garden City in February 2017.

When he arrived, he had severely damaged vocal cords due to a motorcycle accident and couldn’t afford the medical cost in Malaysia. He was only able to whisper. We had several caseworkers helping him obtain health insurance and visiting doctors, so he could undergo a surgery that could bring his voice back. But as we started losing staff members because of the office closure, I began to work directly with Nor Kamel. 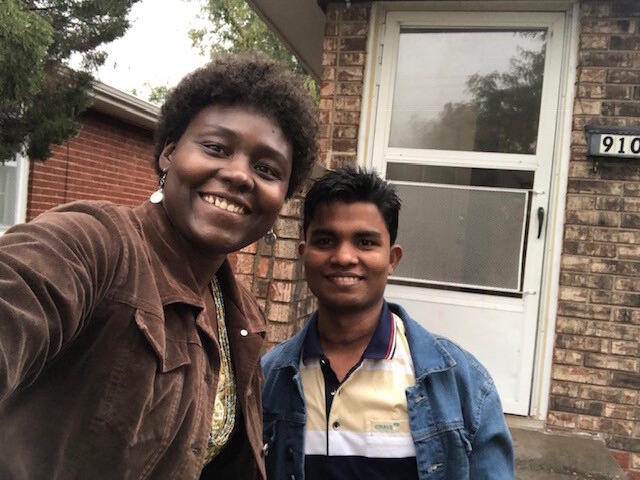 Amy with 19-year-old Nor Kamel, who was resettled by the IRC after he fled from Myanmar. In the midst of packing up her office and having to close down operations, Amy taught Nor Kamel how to save for his surgery on his vocal cords, sought out doctors who would perform the surgery and volunteers to drive him to his appointments.
Photo: Amy Longa/IRC

He never gave up. He exhibited a strong desire and commitment to get well. To me, being a refugee in itself is strength & courage. Even when doctors said he would never be able speak again, that surgery was too risky, he would whisper: “No, no, no, no, can we try another doctor?”

It took him about a year and a half working in a slaughterhouse to save up $6,000 for the co-pay.… I had the privilege to help him navigate the system, whether it was looking for alternative specialists, counseling him to save more money [and] make sure he has his deductible ready in the bank account, coordinating volunteers to give him rides to the doctors.

I had no desk, I had all my boxes packed up, the office was ready to close, but I could not just say no when I knew that there was something I could do, even if it’s a mere phone call.

We did find a doctor who performed the surgery. Nor Kamel said I would be the first person he’d call after the surgery was complete.

I vividly remember‚ he said hello and I broke down in tears. I cried for two to three minutes straight.

And looking back, I was weeping because the process of trying to get him the surgery was a very emotional journey because if the IRC wasn’t there for people like him, who would help to coordinate the surgery with the clinic? What will become of him? His parents are not here—so he needs to get well and be able to take care of himself.

When I heard his voice, it was a huge relief for me. I was able to finally come to terms with the office closure knowing that Nor is fine. That we, the IRC, took care of him—and henceforth, he will be able to chase his dreams like any other young man should. It turned all the pain, fatigue, emotion and disappointment around. It was very rewarding; it’s why I stayed with him until the very end.

For a moment, I wish more Americans would have an open mind and just say hello and smile. And get to know their neighbors.

Purest form of a friendship

For a moment, I wish more Americans would have an open mind and just say hello and smile. And get to know their neighbors. We partnered with local church leaders who had zero knowledge of refugees. We were able to speak to strong conservatives and engage in a respectful conversation where we calmed their fears and lent an open ear. The IRC became the source of information—the voice and advocate for refugees and support for the community to enhance integration.

I have heard from our volunteers [who say] that knowing refugees—going into their homes or inviting them to theirs—has been the most beautiful experience that they have ever encountered. In fact, it’s motivated them to become a voice and advocate. They want to let other American families know that they’re missing out on this beautiful, committed, dedicated friendship that you can have with a refugee family. It’s the finest, purest form of friendship you can find.

Today, Amy remains dedicated to her work for the IRC. When the Garden City office closed, she continued to help refugees in Wichita, Kansas. Amy has worked in humanitarian aid for more than 11 years and was featured on the weekly radio program This American Life, where she talked about the IRC’s resettlement program in Garden City.

“The mission [of the IRC] is to ensure that all the disadvantaged are given a second chance in life. I am very happy to be a part of that,” she says.

A new bill in Congress, the GRACE Act, would ensure that the U.S. admits at least 95,000 refugee women, men, and children each year. If passed, it would preserve America’s tradition of welcome for years to come—no matter who is president.