The Trump Administration has proposed slashing refugee admissions to record-low numbers. Here's how you can take action.

At a time when more people around the world are fleeing violence and persecution than ever before, the Trump Administration has proposed drastically cutting the number of refugees allowed into the country to 18,000.

Each year, the president consults with Congress and sets an annual target for refugee admissions. The administration's recent announcement follows an already record-low admissions cap for 2019 of 30,000—less than half of the historic average under both Republican and Democratic administrations. These policies separate families and put lives at risk. They also are antithetical to American values.

In this critical moment, we must show the Trump Administration that its actions do not change the welcome that is only growing stronger in our communities. Here are seven ways you can join us:

1. Speak out. Ask Congress to pass the GRACE Act.

Congress can take action to make sure America welcomes refugees for years to come—no matter who is president. A bill called the GRACE Act would ensure the U.S. aims to resettle no fewer than 95,000 refugees each year, restoring the program to historic norms and upholding America’s bi-partisan tradition of welcoming those in search of safety.

Call your member of Congress today and ask them to co-sponsor the GRACE Act. You can learn more by downloading our advocacy toolkit here. 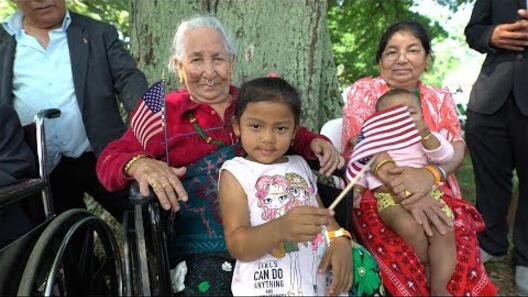 Video
What is the GRACE Act?

2. Donate to the IRC to support refugees in the U.S. and abroad

Make a donation today to support the International Rescue Committee in our work helping refugee families in the United States and around the world to survive and rebuild their lives.

You can have the biggest impact by making a monthly donation, which gives us consistent support as we provide refugees across the U.S. with the services they need to integrate into their new communities. Donate here.

You can find many other ways to make a monetary gift here. And don't forget: You may be able to double—or even triple—the impact of your generous donation with a matching gift from your company.

We’re collecting 95,000 signatures to demonstrate America’s commitment to welcoming 95,000 refugees, in keeping with historic tradition and the GRACE Act.

Sign our petition, then help us reach our goal by sharing it with your friends and family.

4. Write a letter to the editor

Members of Congress follow their local newspapers closely, so writing a letter to the editor is a powerful way to make sure they hear from you and support the GRACE Act.

Check out our guide and sample letter to get you started.

Look for an IRC refugee resettlement office near you and learn more about IRC volunteer opportunities and other ways to help locally. These might include mentoring a refugee family, becoming an English tutor, or coaching a refugee through writing a resume for a first job in America.

Please note that due to overwhelming interest not all offices are currently able to accept new volunteers.

6. Learn more, then teach your friends and family

Did you know that refugee resettlement hit record high numbers under Republican president Ronald Reagan? Get the facts on refugees in America by taking our quizzes on topics such as resettlement in the U.S. and presidential support for refugees. When you're done, share the quizzes to educate others.

You can also spread the word about the many reasons we should support refugees. For instance, resettlement plays a critical role in U.S. foreign policy by encouraging other countries to keep their doors open. It also promotes regional safety and security, which is why retired U.S. military leaders recently sent a letter to the president outlining the case for resettlement and calling for a robust U.S. refugee admissions program in the coming year.

As retired Flag & General Officers of the U.S. military send an unprecedented open letter to President Trump calling on the need for a ‘robust’ US refugee admissions program in the coming year, our thoughts: https://t.co/l2CUnBLpWZ

Resettlement is good for the economy, too. The Trump Administration’s own analysis showed that, over a decade, refugees generated $63 billion more in government revenue than the U.S. spent on welcoming them. In addition, the IRC has found that refugees and new Americans help revitalize communities by filling worker shortages in critical industries such as health care and transportation.

Finally, you can share our Facebook post to remind your friends and family of America’s long history as a safe haven for people fleeing war and persecution:

The IRC has teamed up with Airbnb to host refugees and asylum seekers in free, temporary housing. You'd provide a safe and stable place for a family to stay and feel at home in their new communities, free of charge. Airbnb also waives all fees. Airbnb's Open Homes Help Center includes links to resources and answers to commonly asked questions, and its team is available to support you if you have any questions as you get ready to host. Learn more and sign up to Open Homes here.

Refugee resettlement represents what is right and good about the United States: A nation and a culture that has, for centuries, welcomed those who yearn for and work toward peace, safety, and a better life for themselves and their families. Americans across the country live this legacy every day. Many are refugees themselves, some have parents who fled from conflict or persecution, and others simply know the immense contribution that refugees make to their communities as teachers, friends, business owners, neighbors, and so much more.

Thank you for standing with refugees.