Up to a million civilians are caught in the battle to retake Iraq's second largest city from ISIS. One of them shares the dangers he faces every day.

Hundreds of residents have been killed as they try to flee the city, and dozens of wounded arrive each day at hospitals on the outskirts.

The battle for Mosul continues to intensify and is expected to rage on into the spring. While more than 30,000 civilians have managed to escape since the fighting began in October, up to a million remain trapped.

One resident still inside Mosul told the International Rescue Committee last week about his fear of being targeted by snipers if he tries to flee. He says that people are running out of food and medicine, and that the army’s advance doesn’t guarantee their safety:

It’s impossible for the military operation not to impact civilians. ISIS have built sand banks to slow down the Iraqi army advance and booby-trapped a large number of houses and government buildings.

They have also dug bombs under the main street, which they’ve covered with asphalt. They have left parked cars filled with explosives next to civilian houses. 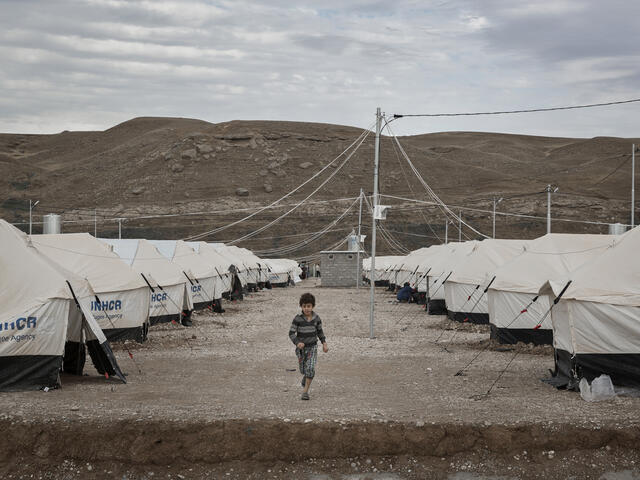 A boy at the Zelikan camp, which shelters Iraqis who have been displaced by military operations to retake Mosul from ISIS. Up to a million Mosul residents remain trapped by the fighting.
Photo: Theresa Breuer/IRC

The battle of Mosul has caused ISIS to react extremely severely. As the Iraqi forces get closer to Mosul’s prisons, [ISIS] have started executing the inmates -- former policemen, government employees and other civilians [they have imprisoned]. They are executing anyone they find carrying a mobile phone in case they are communicating with the army.

For eight months, the use of satellite TVs has been banned to prevent people from getting any non-ISIS-controlled news. However, since the beginning of the military operations, more people have started to secretly reconnect their TVs.

It’s impossible for the military operation not to impact civilians.

Also, cell phone networks are partially back online, which is helping people communicate with the outside world. Many people are also listening to FM radios for instructions from the Iraqi army on the safest way to escape Mosul.

Ever since ISIS took control, the amount of food and medicine getting into the city has declined significantly.

Prices rose and many people struggle to afford to buy the basics, like rice, flour and sugar.

It is now extremely difficult to afford medicine. Just a single dose of insulin now costs 50,000 IQD ($42). Civilians aren’t even allowed to visit the hospital as ISIS is keeping it for use by their fighters only.

People in Mosul are cautiously waiting for the Iraqi army to reach their homes. We’ve seen people raise white flags to show they are civilians -- and many raised the Iraqi flag once their neighborhood was retaken.

But there are also many who are worried about what will happen next. ISIS’s media has created a great deal of fear by telling people the entering forces will carry out revenge attacks in the city.

The IRC’s response in Mosul

IRC aid workers are delivering lifesaving assistance in retaken areas just north, south and east of Mosul. Our response includes providing emergency supplies and access to health care to displaced people sheltering in the Khazir and Zelikan camps. We also are distributing cash to the most vulnerable families displaced around the cities of Tikrit and Kirkuk to help them pay for rent, food and other basic necessities.

We’re providing support to children who have been traumatized by the fighting, as well as referring for counseling for women and girls affected by violence. Learn more about how we are helping people fleeing Mosul.