Ukraine war: What are the impacts on the world today?

After over nine months of fighting, there is no end in sight for the war in Ukraine. Millions of civilians are unable to return home. Many still in the country are forced to live without access to food, water, health care, and other essential supplies.

This is not an isolated crisis—blockades of Ukrainian grain exports have worsened hunger in some of the world’s most vulnerable regions. Even as international efforts have helped to resume grain shipments, the situation remains dire. In East Africa, for instance, a perfect storm of continued drought, the blockade, and the economic fallout from the war is causing mass starvation. Without urgent international funding, the lives of millions of people are at stake.

Get the facts on how the war in Ukraine is impacting both Ukrainians and people around the globe.

Update: Read the IRC's latest release condemning the recent attack on a maternity hospital in Vilniansk, in the Zaporizhzhia region of Ukraine.

The continued conflict in Ukraine is causing extreme civilian harm and leaving millions without access to food, water and other essential supplies. Innocent civilians have been cruelly caught up in the conflict, with over 17,000 casualties since 24th February, including over 6,500 killed. Over 5.9 million people have been internally displaced.

There has been catastrophic damage to civilian infrastructure, including hospitals and schools. With Ukraine’s cold winter months approaching, families are seeking shelter in damaged buildings not suited to deal with sudden drops of temperature or heavy snowfall.

Starting in October, waves of airstrikes left even more people across the country to face the cold without access to gas, electricity or centralized heating systems. In just one day in mid-November, over 7 million people were left without electricity due to the fighting.

The cold winter months could also bring a health crisis to Ukraine.  In the eastern part of the country, the health system is crumbling and hospitals are out of medicine. Many people lack access to safe water and critical care. The World Health Organization (WHO) has warned that thousands are at risk of pneumonia and hypothermia. COVID-19 continues to spread and interruptions to routine vaccinations could even lead to surges of polio. 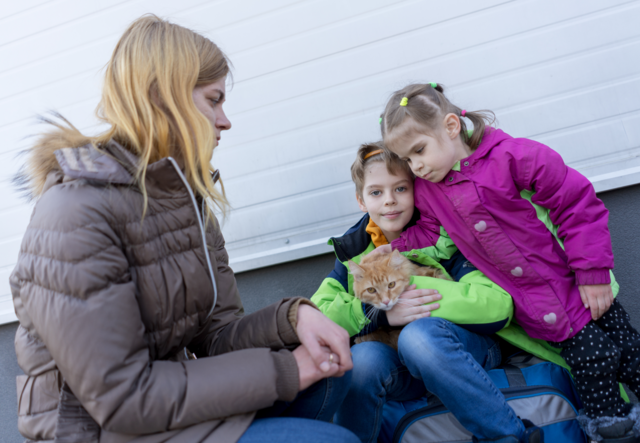 Maxim’s family stayed in Ukraine as long as they could so that his little sister with special needs could continue her treatment. The family was forced to flee as their hospital became overwhelmed with casualties from the war.
Photo: Andrew Oberstadt for the IRC

What is life like for those displaced by the war in Ukraine?

The war in Ukraine has created the fastest displacement crisis in Europe since World War II. The majority of those displaced are women and children, who are always most at risk of exploitation and abuse during crises.

How many Ukrainian refugees are there?

As of November 2022, there are over 7.8 million refugees from Ukraine recorded across Europe.

Where have most Ukrainian refugees found protection? 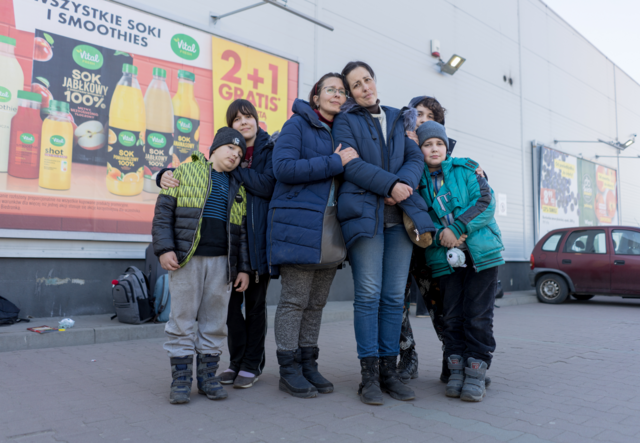 Marta* and Oksana* are two sisters from Ukraine. When the war broke out they fled together with their children and one small bag to Poland. The sisters are grateful for the assistance provided by volunteers who are welcoming refugees.
Photo: Andrew Oberstadt for the IRC

What is life like for Ukrainian women and children fleeing the conflict?

In crisis settings, existing gender inequality is exacerbated while instances of gender based violence increase. Women and girls with extremely stretched resources and disrupted support networks are vulnerable to traffickers ready to exploit the crisis.

Children forced to flee Ukraine have their lives uprooted, education interrupted and are in some cases even separated from their families.

One mother’s story about fleeing Ukraine with her children 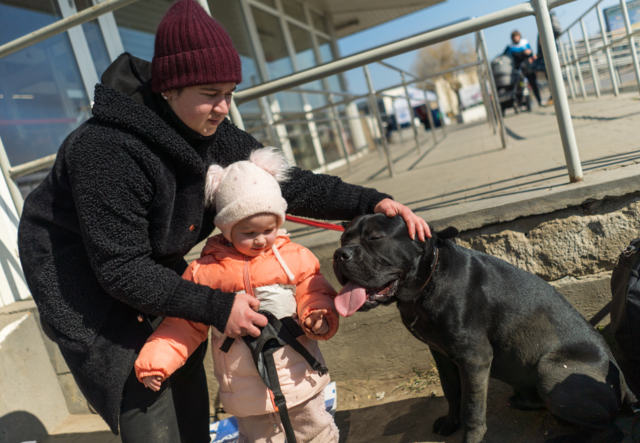 Maria waits for transportation with her daughter, Daryna, and their dog, Tyson. “It was time to leave. I was also concerned about my child. I wanted her to stay alive, that no bombs would fall on us," said Maria.
Photo: Andrew Oberstadt for IRC

How does the war in Ukraine affect the rest of the world?

The war in Ukraine has an obvious impact on those within the country displaced by conflict. Outside of Ukraine, the war also continues to have a major effect on the global markets and food supply. Ukraine’s inability to export grain throughout the first five months of the conflict worsened a global hunger crisis, with catastrophic impacts throughout the world.

Why is Ukraine grain so important?

Ukraine is historically a large exporter of grain. In 2021, Ukrainian grain fed 400 million people around the world. For the first 5 months of the war, Ukraine was unable to export its grain through its primary shipping routes through the Black Sea.

Countries reliant on this grain suffered as a consequence. Several grain-receiving countries across the Middle East and Africa were already experiencing hunger crises due to conflict and climate change. The war in Ukraine made these hunger crises worse.

What countries are impacted by the war in Ukraine?

The global repercussions of the war have had catastrophic impacts on countries already facing conflict and crises.

East Africa is facing a looming famine, as a severe drought hits the region alongside the disruption in food supply caused by the war in Ukraine. Over 14 million people across Somalia, Ethiopia and Kenya are already on the verge of starvation—about half of them children. That number could rise to 20 million if the world fails to take urgent action. 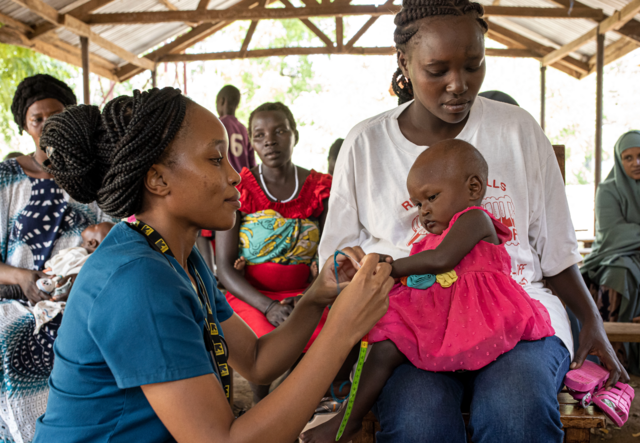 Dr. Sila, an IRC health manager, screens 1 year old Vanessa for signs of malnutrition at the Kakuma Refugee Camp in Kenya. The war in Ukraine has contributed to increasing rates of malnutrition in Kenya by limiting food supplies.
Photo: Patrick Meinhardt for the IRC

The Sahel region of Africa is experiencing its highest levels of severe food insecurity since 2014. Up to 18 million people are experiencing severe hunger.

In the Middle East, the war in Ukraine has sent prices of wheat and fuel spiraling. Syrian refugees are among the hardest hit, as many do not have the incomes to cover the dramatically increased cost of living. 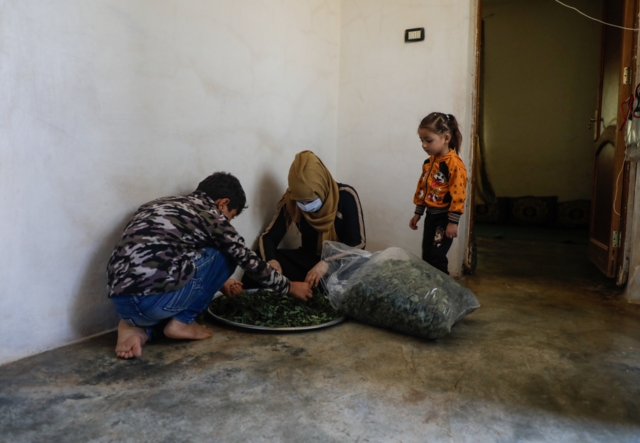 Swasan* is the main breadwinner of her family, displaced from their home in Aleppo, Syria. Rising food prices have made it harder for Swasan to provide enough food for her family.
Photo: Abdullah Hammam

In Central America, prices for staple foods like white maize are well above the five-year average. Together with climate change and ongoing insecurity, nearly 13 million people across the region face growing hunger.

What is the Ukraine grain deal?

Back in July, Ukraine and Russia entered into separate deals which paved the way for Ukraine to resume its grains export – a crucial step in providing relief to a growing global hunger crisis. After a temporary suspension by Russia, the IRC welcomed the extension of this deal by a further four months in November.

“Now, the international community must ensure regular and predictable food shipments urgently reach those on the brink of starvation and that Ukraine’s farmers are able to safely grow and transport crops to the ports,” said Marysia Zapasnik, the IRC’s Ukraine country director.

What needs to happen now?

Ending violence against civilians is one of the most important steps to help Ukrainians rebuild their lives. World leaders must ensure that international humanitarian law is upheld and that humanitarian actors are protected and maintain access to help those in need. 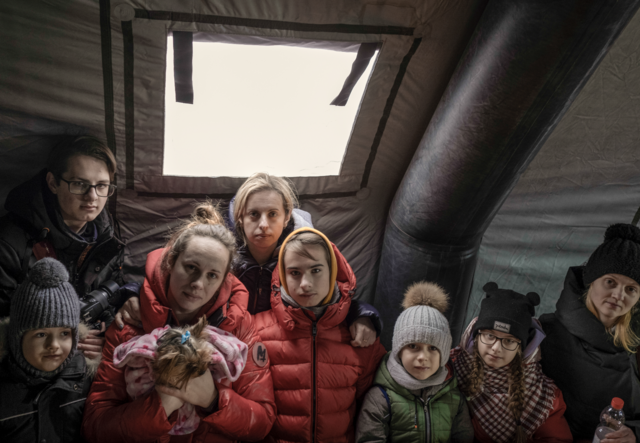 The world must also continue to support both the people who fled Ukraine and the millions of refugees and displaced people worldwide. While there has rightly been an outpouring of global support for people fleeing Ukraine, equal empathy must be shown for refugees and displaced people in many other crises around the world including Afghanistan, Ethiopia, the Democratic Republic of Congo, Yemen and Syria.

To address the hunger crises hitting East Africa and other regions, donors should urgently channel funding to front line responders who can reach those most in need and deliver the health programming, food and cash assistance, and clean water that people need to survive.

The IRC is continuing to scale up its response efforts in Ukraine, Poland, and Moldova, to match the growing scale of needs and support displaced families. This includes:

Responding along the entire arc of the crisis, we are also assisting Ukrainian refugees in Romania, Hungary, Slovakia, Czechia and Bulgaria, as well as in Germany, Italy, Greece and the UK.

Donate now: Your gift will help us provide food, medical care and emergency support services to families whose lives are shattered by conflict and crises around the world.